A Mexican Nature Reserve Hopes to Get Sea Cucumbers Out of a Pickle - Atlas Obscura
Want to see fewer ads? Become a Member. 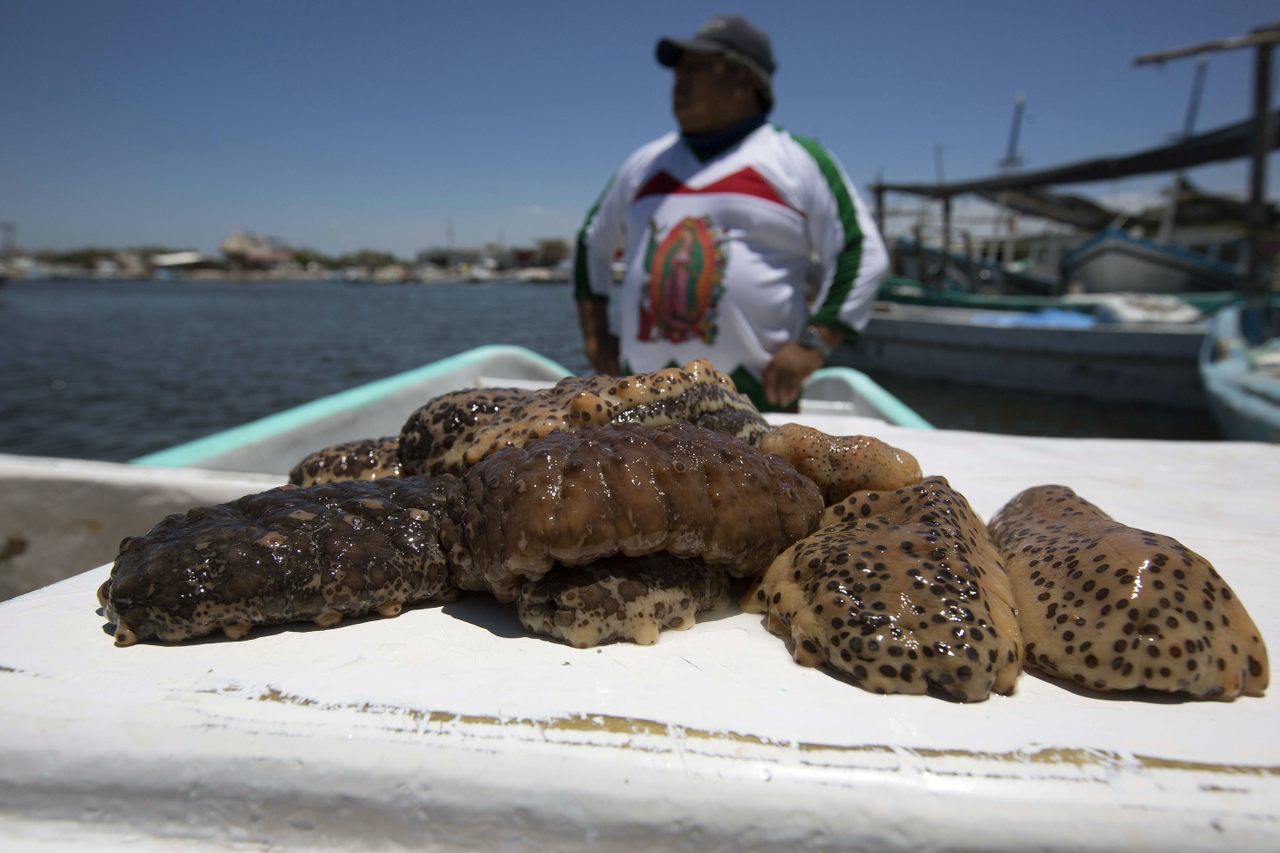 A fisher with a sea cucumber haul in Mérida, Mexico, in April 2018. HUGO BORGES/AFP via Getty Images
In This Story
Destination Guide

Nature reserves often bring to mind roaming buffalo, lions, elephants, maybe a rhino. A future reserve in the fishing town of Rio Lagartos, in the Mexican state of Yucatán, will be different. Close to salt mines and mangrove forests, it might see flamingos and sea turtles stop by. But the purpose of this place, less than a square mile across, will be to protect a much less charismatic species: sea cucumbers.

Sea cucumbers are shaped like turds, and have leathery skin. Some species have spikes, stripes, or spots. They lack eyes, ears, and any other orifices besides an anus and a mouth, surrounded by tentacle-like feet that gather food. Despite their lack of obvious charms or table manners, sea cucumbers are popular dinner guests. Fishers or middlemen processors gut, cook, dry, and salt sea cucumbers, then sell the meat as a luxury food in China, Hong Kong, Taiwan, Singapore, North and South Korea, and Malaysia. Thus processed, the creatures are called bêche-de-mer, trepang, or gamat. The dishes are mild in flavor, according to the Michelin Guide, but high in protein, low in fat, and rich in amino acids, Vitamin A, and minerals including calcium, magnesium, and iron.

In addition to being nutritious, sea cucumbers are incredibly easy to catch: Many species don’t sting or bite, and they aren’t quick swimmers. They live in dense groups, famously a disaster for other easily exploited, inconveniently delicious animals such as passenger pigeons. Sea cucumbers loaf around in accessible locations, congregating around corals, rocks, or seaweeds in warm, shallow waters. “They’re a little bit camouflaged, but they don’t move,” says Abigail Bennett, an assistant professor of global inland fisheries ecology and governance at Michigan State University. “The sea cucumbers just kind of sit there.”

Poaching and smuggling have ramped up over the last few decades, driven by high prices: The dried meat can now fetch up to $220 per pound. Illegally fished Mexican sea cucumbers make up as many as half of the open wildlife investigations in the U.S. Fish and Wildlife Service’s Southern California region, according to one study. Mexican fisheries organizations put strict regulations, permit systems, quotas, and open seasons in place, but there’s a thriving black market driven by people who ignore these rules.

Criminal activity around sea cucumbers can be dangerous for local fishers. Armed poachers fired on and kidnapped 14 fishing cooperative members in 2014. In response, the fishing cooperatives and other fishers shut down the road to a large nearby salt mine in order to demand government intervention. Fisheries officials eventually increased surveillance in the area, but trust between the fishing cooperatives and the government is sometimes lacking, and conflict continues. In 2015, 10 men attacked three guards in El Cuyo, on the Yucatán peninsula, to steal several tons of sea cucumber. Mexican customs officials caught them later at the Cancún International Airport with nearly 19 tons of dehydrated sea cucumber meat. In 2017, U.S. federal courts charged three people with smuggling over $17 million worth of sea cucumbers from Yucatán through San Diego and then to markets in Asia.

The demand for sea cucumbers is so high that some species are in danger of being overfished to the point of obsolescence. In Yucatán, the commercial industry only really revved up in 2012, but there are already signs of a dwindling population. Several thousand tons are fished from the area every year. Fishers have to travel farther and farther from the shore, divers work at greater depths, and the easy harvests of the early 2010s are now a memory.

That’s why Bennett and fellow scientist Meredith Gore decided to use their combined expertise to create a plan that could help with overfishing and poaching in the region. Along with local fishing cooperatives and the Mexican government, Bennett and Gore—currently an associate professor in the Department of Geographical Sciences at the University of Maryland—hatched a plan to address the dwindling sea cucumbers without stoking violent clashes.

Bennett, who studies fisheries and food security, began traveling to Yucatán as an undergraduate student researching ecotourism programs. She returned in graduate school to look into how fishing communities were working to stop illegal sea cucumber fishing and overfishing in general. She’s been going back to the area for the past six years, until the pandemic hit. Bennett and Gore met a few years back, when Michigan State University—where they were colleagues at the time—assigned them to teach a class on science, technology, and environmental policy together. They met to plan the course at a local diner in East Lansing and quickly realized their shared interest in wildlife trafficking and illegal fishing, as well as coffee and sweets. (“I remember being incredibly caffeinated,” says Gore.)

They secured a grant from the U.S. Fish and Wildlife Service, and the pair spent the next several months planning workshops with members of the local fisheries associations in Yucatán. Drawing on Bennett’s previous knowledge of the area, they wanted to apply criminology principles and previous environmental crime case studies to this specific sea cucumber poaching challenge. For example, some research has shown that limiting access to certain roads makes illegal logging more difficult. This principle can apply to marine crime, too—it’s generally easier to illegally fish in areas with quality ports, lots of boats going back and forth, and little government oversight.

Once the pair arrived in Yucatán, they started meeting locals. People in the town were already familiar with Bennett, but Gore worked to introduce herself. “It’s kind of like, ‘Who are you and what are you doing here?’” says Gore.

Gore and Bennett hosted four different fishing cooperatives at the workshops. The organizers imagined the meetings as a back-and-forth between themselves and the fishers—more of a back-and-forth than a lecture, with the scientists and members of the fishing cooperatives exchanging knowledge and insights. “One group had this set of tools, another group had another set of tools,” says Gore. They discussed making the area less attractive to poachers with signage, surveillance, and lighting. They also developed the idea for a sea cucumber reserve demarcated with signs and fairly close to the shore so that everyone would be able to keep an eye out for anyone trying to fish there. The space would be shared with other commercial species, possibly lobster, octopus, snapper, and grouper. Ideally, the sea cucumbers would breed there.

The fishing cooperatives created budgets and plans to apply to microgrants drawn from the larger U.S. Fish and Wildlife Service grant. Bennett and Gore, along with the leaders of the fishing cooperatives, met with officials in Mérida, Yucatán, and shared reports with anyone who was interested.

But this story has an unhappy ending, at least for now. Gore and Bennett were unable to go back to Yucatán this year because of the pandemic. In Spanish, Israel Song Cruz, a member of the Rio Lagartos Fishing Cooperative, explains that the area has been hit by three storms since last year and the ports were closed to outsiders due to fears around COVID-19. Because the microgrants haven’t yet been dispersed, Cruz says, the cooperative didn’t have fuel for surveillance by boat. He says the economy is still damaged, too, but improving slowly.

Bennett and Gore got an extension to their USFWS project because of COVID-19, and they plan to return in June to monitor changes in the fishers’ perceptions of the sea cucumber populations and how they have been able to implement the strategies they came up with at the workshops. Cruz says the workshops at least brought more awareness to the problem. “Although we still have a lot of work to do,” he says in Spanish, “it is good to receive help from anywhere.”

If there’s any silver lining, it might be that the worldly chaos that has so far prevented the team of scientists and fishers team from creating a thriving reserve and putting their criminology techniques into place may have temporarily stopped poachers, also. Unaware of the human drama above the shore, the sea cucumbers have continued drifting, scooping dead plants and animals into their mouths and pooping them out again. “Sea cucumbers are actually really flexible,” says Gore. “They’re not super picky animals.”

Georgina Mace helped change the way both scientists and policymakers see living things, including the most vulnerable.
Video • AO Docs

3:07
Want to see fewer ads? Become a Member.
From Around the Web
Atlas Obscura Trips
Oaxaca: Tastes of Past & Present
View This Trip
Thanks for sharing!