When a Town Council and a Sci-fi Museum Went to War Over a Dalek - Atlas Obscura
Want to see fewer ads? Become a Member. 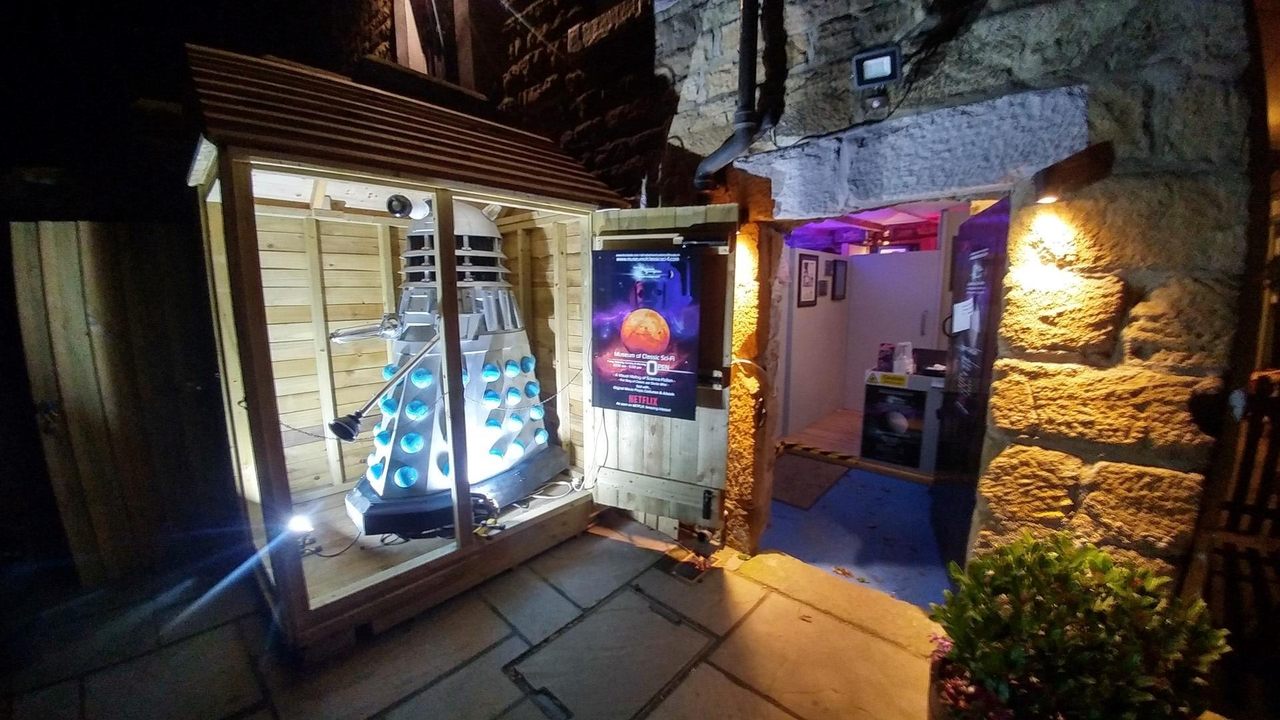 Aliens and monsters lurk inside this museum dedicated to one man's lifelong adoration of all things sci-fi.

It was a cold January morning in 2019 when an unfamiliar car rolled into Allendale, a small village nestled within the North Pennines in Northumberland County, England. This wasn’t unusual; in the prior three months the village had seen a fresh influx of visitors, ever since the grand opening of “Neil Cole’s Adventures in Science Fiction: Museum of Sci-fi.” The family-run business, with a menagerie of pop-culture intergalactic friends and foes in an impressive array of classic movie and television props, costumes, and original artwork, wasn’t so much a museum as it was a loving ode to the genre. As odd a choice as the quiet, historically rich Allendale seemed for such a contemporary collection, locals had whole-heartedly embraced the attraction and welcomed the tourism it brought.

The passengers in the vehicle, however, had not come as tourists. “Three huge guys were banging on our door every 15 minutes,” recalls Neil Cole, the eponymous owner, whose personal collection of memorabilia populates the museum. “There was a car watching from across the street. This was the [Northumberland County] Council; it was the first we’d heard from them.” The men, officers from Highways Enforcement, had been sent by the Council to follow up on a complaint that had been lodged against the museum by a single Allendale resident.

Cole and his wife, Lisa, had been accused of defiling their historically listed property by installing a modern timber shed outside it, along the street, without planning permission. They were given 14 days to remove it. This was no ordinary shed: It was home to a life-size Dalek.

In 1963, viewers of the classic BBC science fiction program Doctor Who were first introduced to the Daleks, a fearsome race of fascist cyborgs bent on achieving world domination. In the 50 years since their creation, Daleks have proven to be the most iconic and timeless of the Doctor Who villains. Cole’s homemade cyborg—dubbed the “AllenDalek” by its fans in Allendale—had become a beloved village landmark. As the museum’s sentinel, it was more inclined to pose for selfies with humans than initiate their extermination.

“One of the arguments that a councilor made [against the shed] was that we didn’t need a Dalek outside because we had one inside,” says Cole. “They were missing the point: The one inside is an original; the one outside attracts people inside. A little sandwich board is not going to do it.”

Cole refused to be bullied, but the Planning Committee would not yield. The battle between the AllenDalek and the Northumberland County Council made headlines across the country—and the globe. Even Hollywood took notice; a Tom Hardy–helmed film about the saga is currently in development. The Council repeatedly declined requests for comment at the time, instead releasing the statement, “We wish to work with the property owner to resolve this[.]”

The Council didn’t appear to be quite so open to dialogue in practice. On two separate occasions, Cole claims, a member of the Planning Department was caught hiding behind his garbage bins, covertly snapping photos of the AllenDalek. Cole says, “It was all about ego, saving face, and people throwing their power around irresponsibly.”

It was never clear who had made the initial complaint, but the AllenDalek and Cole appeared to have the community’s support. After Allendale locals—in a show of solidarity—orchestrated a town-wide invasion of homemade Daleks to coincide with a February 18, 2019, inspection of the museum and shed, the Council agreed to a meeting with the Coles on March 4. The Interim Director of Planning for all of England was in attendance. She refused to shake Cole’s hand. “I thought she was there to have a discussion,” says Cole. “She was there to put the fear of God into us. It wasn’t a meeting, it was a telling-off.” The Council defamed the Coles as criminals, and cited them for neglecting to request planning permission not only for the shed but for the installation of informational plaques onto the beams of their house. “We were told we could be prosecuted … That meant we would have to take everything down and close the museum for the sake of 20 screws.”

Allendale Parish Councilor, Glynn Galley, who was in attendance, described the meeting in an interview with the Hexham Courant as “An extremely grim meeting with little positive said for an hour,” and claimed that the planning officer “Told [Cole] three or four times we can close you down.”

Regarding the claims of animosity during the meeting toward the Coles, a representative for the Northumberland County Council responded to the Hexham Courant, “A number of actions were identified that are required to be carried out by the property owners in order to meet the conditions attached to the planning permission and listed building consent.” The representative further elaborated that the Council would aid the Coles in meeting their legal requirements.

It seemed Cole’s fledgling museum, and lifelong dream, were about to be exterminated.

Overnight, fans raised more than double the money needed to pay the citation fees, with enough left over to hire a planning expert. A petition to save the AllenDalek collected more than 3,000 online and physical signatures.

The Coles appealed. Nearly 200 people wrote letters of support for the AllenDalek and its shed. “I cannot understand why permission would not be given for such an unobtrusive, temporary structure,” wrote Northumberland County resident, Catherine Smith. Another local resident, Naomi Ainley, asked, “In a time when rural industry is struggling and we need to make every effort to attract income into these beautiful areas, why remove an obvious draw?” Steve Everitt, curator at the Phil Silvers Museum in Coventry warned that “Councils should never underestimate the … educational and history values small museums can offer.”

A hearing was scheduled for August 13, 2019. Armed with several pages of supporting documents, as well as a BBC film crew, Cole was given exactly five minutes to present his case. “I thought, ‘I’m nearly 50, I’ve worked my backside off, I’ve created something special. You are not going to win.’” Although he wasn’t allowed to distribute handouts, Cole did anyway. “It was a collage of about a hundred selfies of people with the AllenDalek. One of the councilors was the head of tourism and I said, ‘This is why I’ve got a Dalek outside.’” After his speech, Cole says he received a standing ovation.

The Council ultimately concluded that there was insufficient evidence to prove the shed was essential to the success of the museum and that the structure itself would “result in harm [to] the character setting of the [Allendale] Conservation Area[.]” However, amid public pressure, a compromise was reached: The shed could remain for one year, after which time it would have to be replaced with a more historically aesthetic structure.

“The Council was meant to work with me to come up with a solution and build something else,” Cole says. “But when we contacted them, they just wouldn’t.” In early August 2020, the Coles finally dismantled the shed. The loss comes with a silver lining, as the shed will be donated to the village preschool, where it will live on as a play area for children. A weather-resistant steel Dalek is currently being built to take the place of its predecessor as the new museum sentinel, Council be damned.

As for the original AllenDalek, Cole was ready to put it in storage. “Lisa said, ‘No, you cannot do that.’ I said, ‘Why? We’re getting a new one.’ She said, ‘That’s not the AllenDalek; that’s the AllenDalek Mk Two. People have supported the AllenDalek Mk One.’” To honor the hard work and dedication of their supporters, the Coles are building a road-legal trailer for the AllenDalek, complete with a glass case. “We won’t just have one Dalek in front of the house—we’ll have two! It’ll look ridiculous, but [the Council] left us this crazy option, so we’ll take the crazy option.”

The saga isn’t over yet. Cole admits the Council could retaliate against the new Dalek, but he and Lisa are better prepared now to fight back. “The community spirit made it very doable,” he says. “We love the house, we love the village, we love the community. Lisa and I are very grateful to the help emotionally that we got.”

After half a century, a Dalek finally achieved world domination (sort of). So what exactly was it about a Dalek in peril that mobilized the public? Cole knows the answer. “The Dalek has managed to sustain itself throughout all the CGI and effects in movies. There’s something there—something undefinable. It’s there in its characterization, the voice, that shape. The Dalek is just so British.”

Join us for a daily celebration of the world’s most wondrous, unexpected, even strange places.
vampires

The Rosenbach museum is home to Bram Stoker’s original notes on vampires and a growing collection of undead literature.
roadside attractions