In the Field With the Intrepid, Dedicated Snailers of Hawai‘i - Atlas Obscura 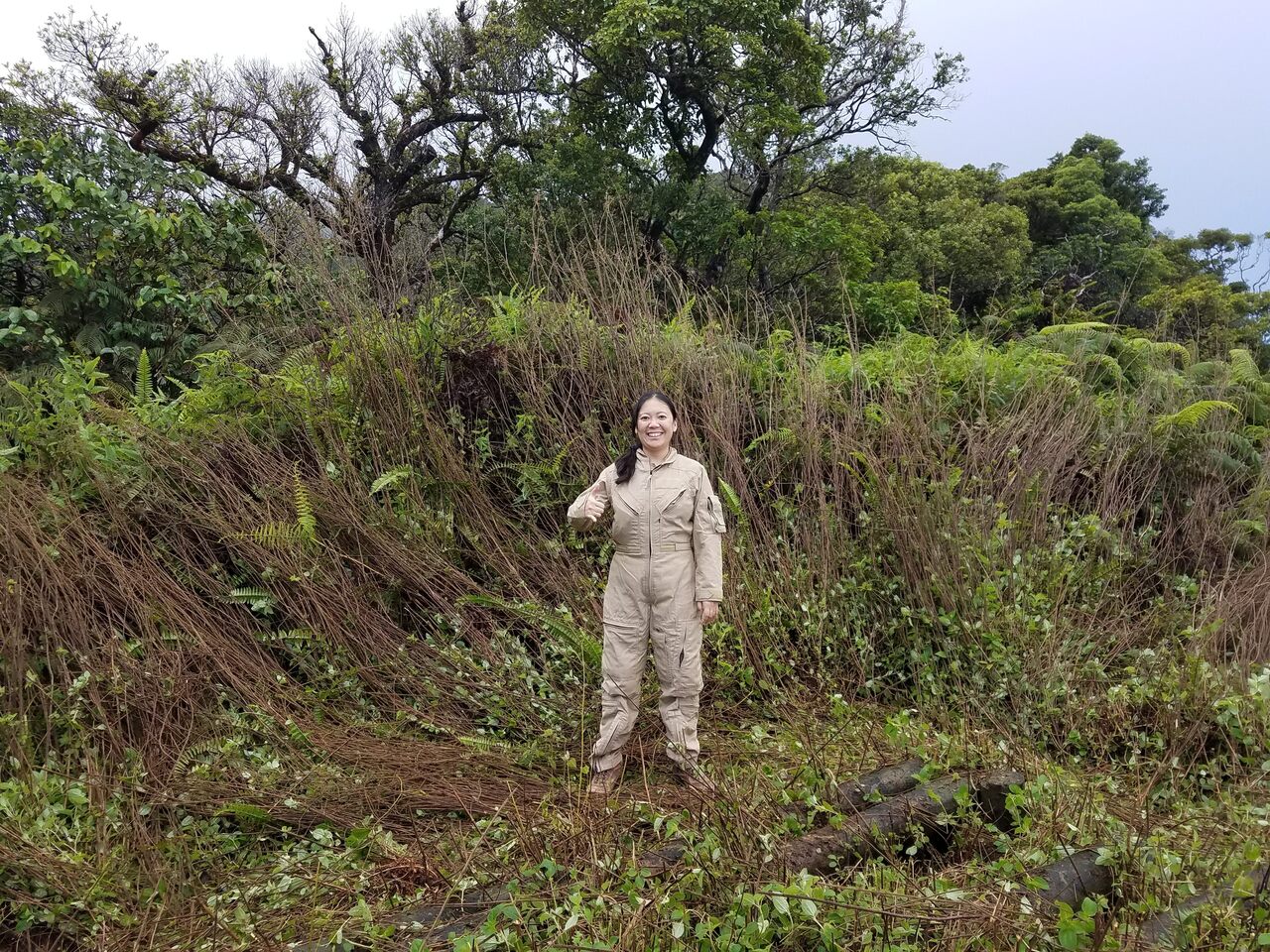 Snailer and malacologist Norine Yeung in a field of trampled uluhe. Ken Hayes
In This Story
Destination Guide

In 2018, Keahi Bustamente went to Molokaʻi, an island nestled between Oahu and Maui, in search of a snail. No one had seen it since the 1960s, but then again, Newcombia canilicuata is barely an inch long, with a delicately whorled shell that looks like an intricately carved almond. Snails in the genus Newcombia once sprawled across the islands of Maui and Molokaʻi, but have all but vanished under the shadow of invasive species, human development, and shell collectors. Tracking down these lilliputian snails—at least the ones that survive—in sprawling Hawaiian jungles is a near-impossible feat. “It’s not like finding a needle in a haystack,” Bustamente says. “It’s like finding Earth in the universe.”

Bustamente, a field technician with the state’s Snail Extinction Prevention Program, is what’s known as a “snailer.” He and his colleagues journey to the island’s last truly wild refuges—places that tourists, and sometimes even locals, have yet to touch. It’s the best strategy for tracking down any of the 750 species of land snails that once populated the Hawaiian islands, 747 of which are endemic to the chain, according to a 2018 report from malacologists Norine Yeung and Kenneth Hayes of the Bishop Museum in Honolulu. (Malacologists are the scientists who study snails, snailers are people who try to spot them in the wild, and shell collectors who acquire live animals are essentially poachers.) “Even as we’re rediscovering snails, species are blinking out as we rediscover them,” Yeung says.

But Bustamente was determined to find N. canilicuata. He’d seen a snail that fit the description in 2015, and had returned to the same place in 2018 with Yeung, Hayes, and other researchers who could potentially confirm the identification and document the population. The area was pristine—promising for the snail but precarious for the researchers. They had to wade through dense thickets of uluhe, an impenetrable clambering fern that makes walking feel more like wading. “You have to walk through it like a sea, the fern holding on to you and grabbing you,” Bustamente says. Covering just 500 yards could take an entire day. “It’s not just that there are no trails,” he says, “but probably no people have been here before.”

The exact location of this place and other sites where endangered snails have been sighted are known only to members of the extinction prevention program and the Bishop Museum. “To guard it against any threats, we have to keep it secret,” Bustamente says. These naturally protected areas are one of the snails’ last safe places, not just from invasive predators, such as larger rosy wolf snails and rats, but also from overly curious tourists and grabby collectors.

The snailers split up to cover as much of the jungle as possible. Though their mission was focused on N. canilicuata, they were on the lookout for any other endemic Molokaʻi snail species. “You can’t go to one area and look for one snail,” Yeung says. “You have to go to one area and find every snail that lives there.”

The next strategy for finding a long-lost snail is to seek out the plants it was formerly spotted on. On Molokaʻi, Bustamente was looking for the hāhā plant, a lobeliad in the genus Cyanea with purple flowers that resemble the beak of the native Hawaiian honeycreeper. He and another snailer trekked through the uluhe until they spotted what they believed could be a hāhā. It turned out to be another, more common species of Cyanea, “but I turned over a leaf and there’s this snail on it,” he says.

Alas, not N. canilicuata, but Laminella venusta, a Hawaiian land snail in the family Amastridae. The family was down to 20 species, from 325. Bustamente’s discovery brought the total to 21 living species. He turned over several other leaves—nine snails in total.

Unwilling to test the luck of this population, which had managed to survive the twin demons of predation by rats and predatory flatworms—the researchers collected all nine individuals and took them to the safest place in the world for a Hawaiian land snail: a 44-foot trailer run by David Sischo, the coordinator of the Snail Extinction Prevention Program. Sischo is the steward of Hawaiʻi’s most endangered snails, and his trailer teems with small plastic terraria that contain the entire known populations of 30 species of snails that are now thought to be extinct in the wild. On Near Year’s Day 2019, Sischo documented the death of Lonesome George, the last known individual of Achatinella apexfulva, a farewell that Ed Yong reported for The Atlantic. When the nine specimens of L. venusta die, their bodies will be deposited in the annals of the Bishop Museum.

Even though Bustamente had just stumbled upon an incredibly rare population of snails, he still wanted to find Newcombia. So he forged ahead, toward, roughly, where Bustamente had seen the snail in 2015, while on a snailing expedition with research student Chris Johns. He’d only spotted it then, in a gulch, because an entomologist who’d seen it in the 1960s mentioned the olopua tree, also called the Hawaiʻi olive. And that’s where Bustamente and Johns found them.

In 2018, when Bustamente reached the same olopua gulch, the snails were easy to spot. They collected 18 of them and left the rest to the wild. When Yeung and Hayes returned to the site nine months later, the N. canilicuata were still there, though the tree that once held nine individuals of L. venusta had been overrun by invasive plants and there was no further trace of that species. For Yeung and Hayes, the blinking out of a population is not unusual or surprising. But it is still devastating every time. “People think of extinction as this rare thing, but in Hawai‘i it’s something we deal with everyday,” Hayes says.

Hayes and Yeung have been studying Hawaiian snails for a little more than a decade, during which time they’ve directed surveys at more than 950 sites. This work has confirmed more than 200 living populations of snails in nine families, which Hayes and Yeung document in their 2018 report on the state of snails in the islands. But there are more out there, if snailers are smart about where they look.

Besides dispatching crews of snailers on quixotic missions, the Bishop Museum is working on a digital database of its extensive collection of six million shells and voluminous archives on where they were found. “Things are disappearing faster than we can discover them,” Hayes says. “We want to make the database publicly available not just to scientists but to anybody who wants to log on and look for snails.”

Traditional Hawaiian knowledge also offers snailers clues on where to look. The Hawaiian call land snails, particularly tree-bound Achatinella species, kāhuli, which means “to turn or shift”—a reference to shell whorls, according to Aimee You Sato, in her 2018 thesis at the University of Hawaii Mānoa, which was published in Society & Natural Resources.

Kāhuli feature prominently in chants, songs, and stories, and were known to sing themselves. King Kamehameha III named his summer home Kaniakapūpū, after the sound of the snails. (Snails have no vocal cords, so there are a number of theories to explain the stories of singing snails in various ways, Sato writes.) Still, the snail’s importance in traditional Hawaiian culture is obscured by that of plants, according to Bustamente, who worked as a botanist before turning to snails. “There aren’t many people who specialize in Hawaiian snails, and not really any Native people who specialize in Hawaiian snails,” he says. “I saw it as a calling.”

As a kid growing up on Molokaʻi, Bustamente used to run around along the island’s north shore, near the immense sea cliffs that spill out into blue ocean. “Any work I can do on Molokaʻi is really special, and I put all my energy into doing good work out there,” he says. Bustamente has tried to spread the gospel of kāhuli to his Native Hawaiian community. Recently, he brought a batch of Partulina snails to his children’s classroom at the Kamehameha School in Maui, which educates Native Hawaiian children. “Most people don’t even get to see these snails, let alone Hawaiian children,” he says. “So that felt really good to do.”

The population is healthy overall, but a mysterious contagion has researchers looking for answers.
islands

The distant cousin of the dingo had been hiding out in the island’s highlands.
fungus

“I just followed a trail of excrement.”
Video • AO Docs

There's uncertainty, but the eruption is confined to the summit caldera.
Read more
Thanks for sharing!