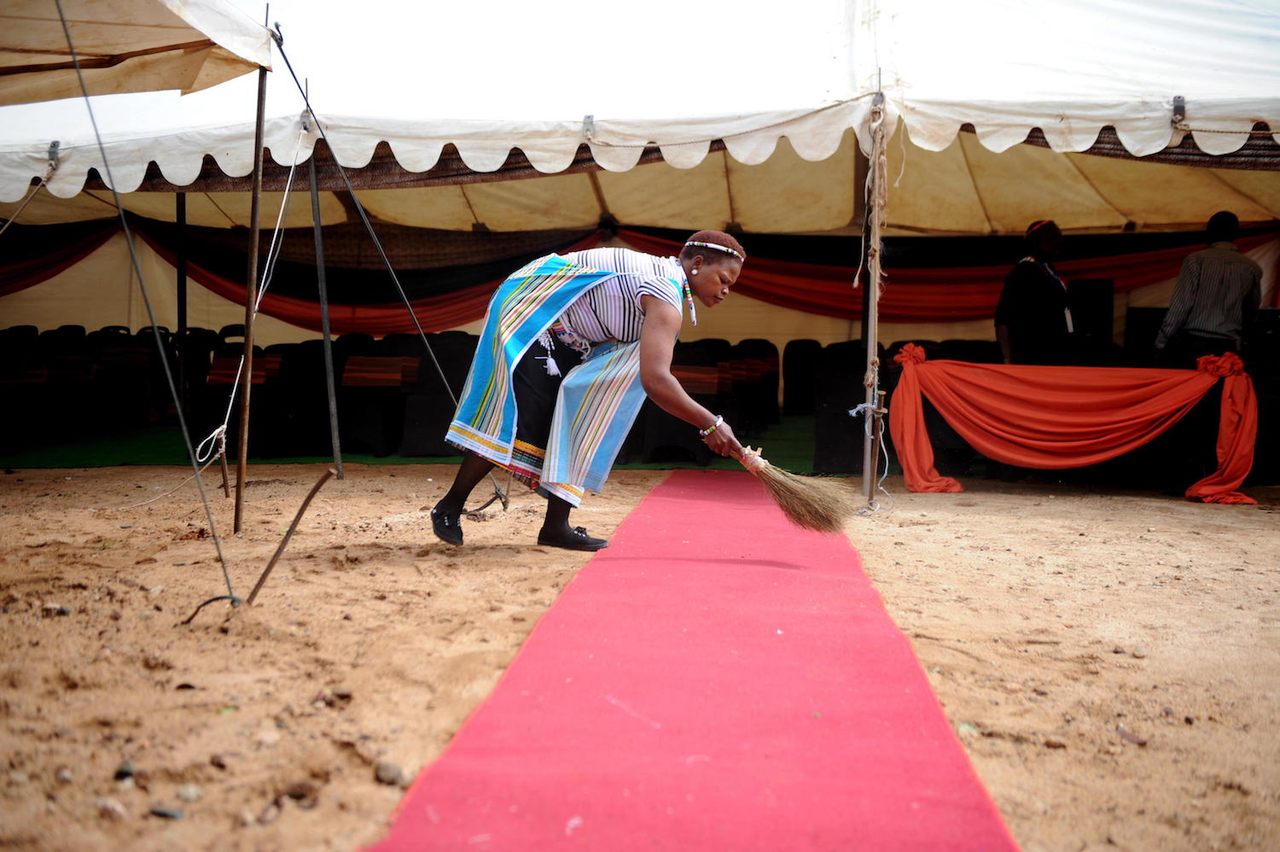 Masalanabo Modjadji was three months old when her mother died. In that moment, she ascended to the throne of the Balobedu, a tribe in South Africa’s northern Limpopo province that is the country’s only queendom. Modjadji currently lives near Johannesburg as a (relatively) normal 13-year-old. When she turns 18, however, she will officially be crowned Queen Modjadji VII, the “Rain Queen,” the latest in a line that’s believed to bring rain to a parched country.

Modjadji’s reign will be different than those of her three immediate predecessors, who were queens in name only after the apartheid regime demoted them to chieftain status in 1972. Two years ago, former President Jacob Zuma changed things back, and made the Balobedu one of the handful of tribal monarchies officially recognized by the South African state. When she comes of age, Modjadji will rule at the same level as the powerful Zulu and Xhosa kings. Though they oversee much larger kingdoms, she will still hold influence over more than 100 villages, and receive a healthy government paycheck.

In April, Zuma and his successor, Cyril Ramaphosa, traveled north for a celebration of Modjadji’s restoration. They sat on either side of the male regent who currently rules in her stead and the queen-in-waiting herself—slightly hunched, with her arms folded across a bright yellow dress and a beaded band ringing her head.

“They gave her title back because she is the one who makes it rain,” says local resident Alpheus Ranatapa on a hot, dry morning in early September. “We were happy. Ramaphosa came here to restore our tradition.”

Sehlakong, the administrative capital and principal village of Modjadji’s realm, is perched on the north-facing slope of the Modjadji Nature Reserve, a mountain forest known internationally for its population of rare cycad trees. Shorter ones resemble giant, top-heavy pineapples, while taller, thinner ones look more like squat palms. Clumps of these old, hardy trees sprout vertiginously off the ridge that forms the spine of the reserve. A valley studded with settlements rolls away from the mountain to the south, while to the east, mountains stack one behind the other until they gently fade to blue.

The landscape, extending through Kruger National Park and Mozambique to the east, is just emerging from a dry winter, and bushfires recently scorched the scrub. Many of the cycad trunks are covered in a sooty deposit that comes off on your clothes as you brush past. According to locals, helicopters had to douse the mountain with water a few weeks back. It is a place where rain is life, and remains the source of Modjadji’s ancestral power.

A common origin story holds that the Balobedu settled in the area about 400 years ago, after migrating south from present-day Zimbabwe. The tribe was ruled then by men, and competition for succession was fierce and fratricidal. Claiming prophetic guidance, the last Balobedu king, it is said, impregnated his daughter to start a line of female leaders.

In the years after Modjadji I’s inauguration, around 1800, the Balobedu were a small and largely peaceful tribe. Lacking military power, Modjadji I governed instead through the politics of mystique. “All over southern Africa, chiefs had official rainmakers. The power of the chief and the power of the rainmaker were separate. But in Modjadji, they were combined,” says Isak Niehaus, a social anthropologist from the Western Cape who is now at Brunel University in London. Powerful rivals, such as the Zulu king, Shaka, didn’t attack the Balobedu. Instead, their emissaries went before Modjadji to ask for rain.

Modjadji I and II ruled unimpeded through most of the 19th century. Each October, the queen asked for rain through traditional rituals. She took “wives” from surrounding tribes, who were then paired off with royal men, which helped build alliances, Niehaus says. According to Balobedu tradition, each holder of the title was fated to commit suicide by poison at the end of her reign—but the Rain Queen herself was held to be immortal.

The Rain Queen also was not to show her face in public, even to her subjects, which led to a great deal of speculation when Europeans colonists began to arrive. In the 1880s, H. Rider Haggard, the British author of King Solomon’s Mines, brought the notion of an African queendom to an international audience with the novel She: A History of Adventure—with, in classic Victorian fashion, a white sorceress ruling over a “Lost World.” Historical records suggest at least one of the early Rain Queens may indeed have been light-skinned, but such accounts should be taken with a healthy pinch of salt: European settlers probably met with surrogates instead, and perhaps for good reason.

“There was some defiance from our people [to] paying tax. Our people became afraid that if we present the queen to them they may kill her, because that was the time when [neighboring ruler] King Makgoba was beheaded,” says Moshakge Molokwane, the royal council secretary and a cousin of Modjadji. “So they presented an old woman and said it was the queen.”

Northern Limpopo was among the last places in modern-day South Africa to be occupied by Boer settlers coming up from the Cape. Although missionaries and a handful of settlers arrived in the region earlier, things came to a head in the 1890s, when Boer authorities started to parcel tribal land into farms. Uncharacteristically, the Balobedu were among the first tribes to fight back, but the resistance was swiftly and harshly put down by the white authorities. Modjadji II followed custom and committed ritual suicide. She was the last Rain Queen to do so.

Modjadji’s political power continued to derive from the rain she was associated with, which fell on her neighbors’ soil as much as her own, even as successive colonial administrators stripped land from tribes, and regulated the use of their remaining forests and fields. Although groups such as the Balobedu are ethnically diverse, settler administrators—followed, from 1948, by the apartheid regime—aimed to lump them into homogenous, self-governing areas. In 1972, the Balobedu were folded into the Lebowa “homeland,” and Modjadji IV was officially relegated from queen to chief.

After apartheid ended in the 1990s, Nelson Mandela’s African National Congress (ANC) took power at the head of a new constitutional democracy. The ANC saw traditional tribal leaders as repositories of votes and legitimacy—local power-brokers with influence and tangible roots in the precolonial past—according to a report from the Centre for Civil Society, University of KwaZulu Natal. President Mandela personally courted Modjadji V and other tribal leaders. When Modjadji VI died in 2005, after serving for just two years, Mandela’s successor, Thabo Mbeki, called her “a symbol of hope and unity,” according to The New York Times. (Modjadji VI, who doctors say died of chronic meningitis at just 27, was a figure both beloved and divisive, and she bucked many of the traditions associated with her position. One branch of the royal family still insists that her daughter, Modjadji VII, should not be permitted to take the throne.)

In 2004, the government launched a commission to attempt to unwind the tangle of competing leadership claims left by colonial and apartheid-era policies, and determine which leaders should have what status. Progress was slow and hotly contested, including in court, but the restoration of Modjadji’s queenship was one outcome. Although she has not yet taken power, the judgment is already steering over five million South African rands (about $330,000) a year through the coffers of the regent and royal council, as well as paying Modjadji’s way through school.

In a parking lot in Sehlakong, the royal council secretary Molokwane—who is known as “Ball Pen,” a moniker dating to his days as a schoolteacher—expresses hope that the restoration of the crown will reinforce Modjadji’s dominion over neighboring tribal chiefs. These leaders, he says, had been installed by white administrators on land that Modjadji traditionally oversaw. “We’re not going to threaten their status as senior traditional leaders,” he says. “They should just know that they are the subjects of Queen Modjadji.”

Separately, Molokwane says the restoration has given the Balobedu the ear of the government in South Africa’s bitter, complex debate over expropriating land from white farmers and giving it to black owners as a form of restitution and to address racial disparities that have persisted since apartheid. Local leaders pressed their claims on President Ramaphosa during his April visit, and have listed nearly 250 local farms that they see as their rightful property. No one knows if these wishes will be granted, but controversy is sure to continue.

The fate of the land may not be determined by the time Modjadji VII officially takes her crown, but the restoration of the Rain Queen has been significant for the Balobedu—both financially and symbolically. “The prestige was always there,” Molokwane says. “But we can now say we’re at an equal footing with the king of the Zulus.”

Visitors Can Touch Human Brains at This Indian Neuroscience Institute

The artificial nests could shield the endangered seabirds from rising temperatures.
art

You can’t not dance when amapiano comes on.
nature

Tragedy set Sicelo Mbatha on a course to understand, and make peace with, the wild on its own terms.
Video • PinDrop