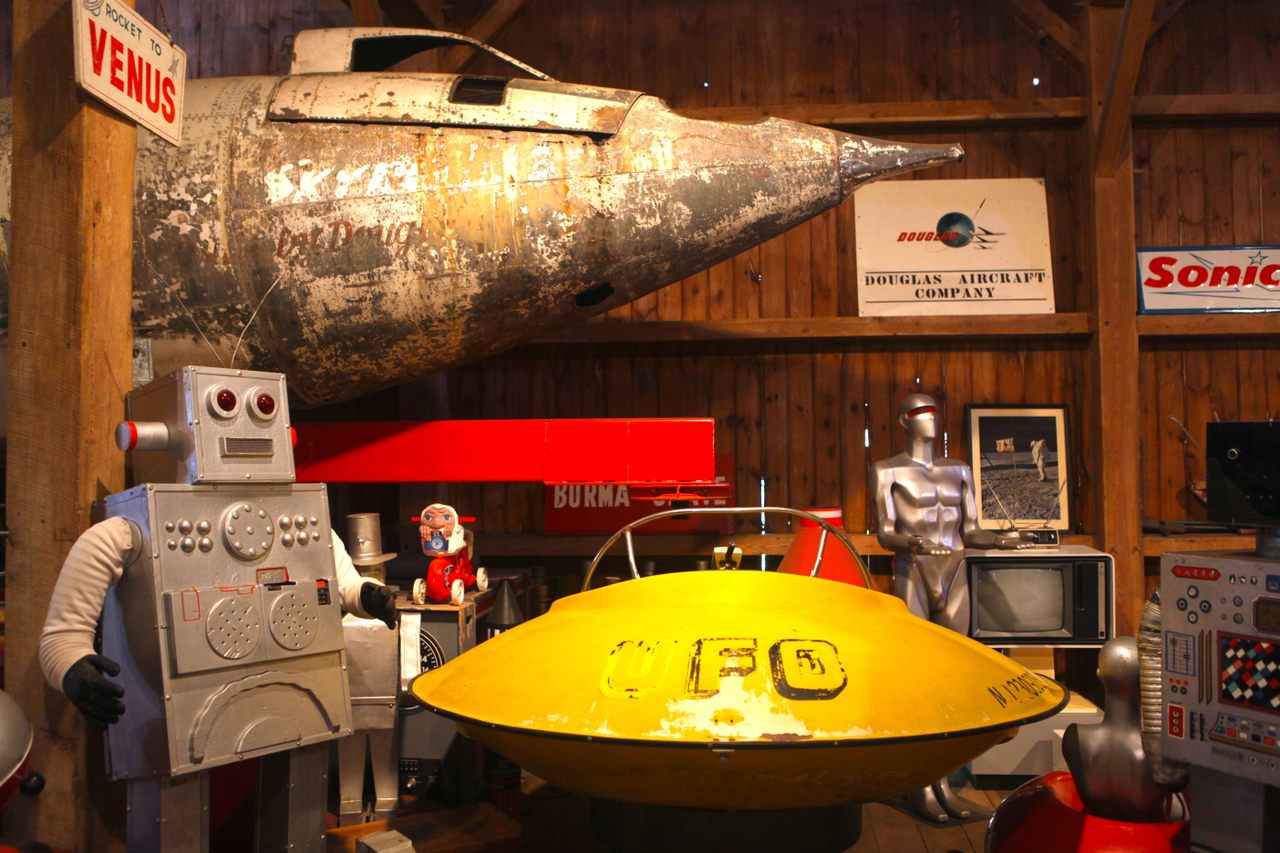 Behold the wonders of the Space Age Museum! All photos by Samir S. Patel

Somewhere in Litchfield, Connecticut, amid the sprawling foliage that attracts leaf peepers to this part of New England each fall, there’s an old barn with a secret.

From the outside, the 100-year-old hay barn looks like the spotless, platonic ideal of a historic red farm structure. But beyond the padlocked wooden door is a treasure trove of bizarre robots, rusting rockets, and art deco ray guns. Welcome to the Space Age Museum, a hidden collection of retro-futuristic artifacts aimed at preserving a specific cultural moment: the era when human beings stopped merely dreaming about going to space and started actually doing it.

The Space Age Museum is the work of father-son duo John and Peter Kleeman, who have been accumulating space-age toys and ephemera since Peter was a boy. John, a self-described “country lawyer,” had always been a collector, and as Peter grew up, he wanted to find something that they could collect together. Young Peter was a fan of Star Wars, and John recalled his childhood fascination with the science fiction heroes of the 1950s, including Buck Rogers, Tom Corbett, and Captain Video. Space toys seemed like the perfect thing.

In the beginning they would frequent flea markets and swap meets, picking up toys and collectibles, focusing on 1950s-inspired items both for their wonderful design and their spirit of play. “I was also into Indiana Jones, so I also felt like there was this archaeological treasure hunt,” says Peter. “In a lot of ways I do think of us as archaeologists of the future.”

One of the key aspects of many of the sci-fi artifacts they’ve collected is their interactivity. “You could send away for Tom Corbett space goggles, or space helmets. You could participate with some of the shows, like Captain Video with decoders,” says Peter. For John and Peter, it’s this element of participation that turns the objects they collect into symbols of changing attitudes about space exploration. By picking up the ray gun of someone like Buck Rogers, kids were able to engage with the (then) ephemeral dream of the Space Age. “A lot of people talk about the Space Age beginning on October 4, 1957, when Sputnik was launched,” says Peter. “But we see the space age vision in popular culture growing for several decades before that. Where we really see it come into pop culture in more of a visual form is with the comic strips and toys of Buck Rogers in the late ’20s and early ’30s.”

As their collection grew, it took on a larger meaning for father and son. With each new piece, be it a far-out pinball machine, a toy wrench in the shape of a rocket, or a homemade folk art robot statue, a narrative began to take shape. “I think about this once-in-humanity transition that is happening, that really began in the last hundred years, where we’re evolving at a rapid pace. This collection represents a shift in consciousness as to where we are in the universe,” says Peter, “and how, through a spirit of play, [it’s] inspired a greater awareness of who we are and what may be in our future.” John agrees. “There is some way that adults saw the fun in this and somehow saw the more philosophical, big picture perspective [too],” he says.

While their collection is called the Space Age Museum, it has no true exhibition space. The items are packed into John’s home office, around the house, and most stunningly, in the huge barn out back. The smaller or more sensitive items, such as the dozens of binders of period photographs, are kept inside Peter’s parents house. The larger items are kept in the barn.

The museum is closed to the public, and the exact location kept under wraps, but Peter and John agreed to let Atlas Obscura visit and experience their incredible collection.

Walking into the massive interior of the barn space is like stepping into the long forgotten backlot of some mid-century science fiction show. Rows of humanoid robots run the length of the space, taking on every conceivable form, be it a sleek silver mannequin with red LED eyes or a round-headed robot carrying a tray that looks like it came out of a 1980s campus comedy.

Where there aren’t robots, there are rockets and spaceships, and these too, come in nearly every shape and size. There are small rockets built from old 50-gallon drums that were once used in amusement park rides. There is a large wooden replica of the original USS Enterprise from Star Trek. There’s even a child-size, wooden X-Wing fighter that John made for Peter when he was 4 years old.

Many of the large pieces in the barn are of unknown origin, discovered by Peter and John in private collections or via tips from friends (“As you collect things you find that the standard storyline is that, ‘some guy at NASA made it,’” says John). But a few of the flagship items have amazing tales. One of the largest pieces in the collection is a colossal spaceship-shaped trailer called a Road Rocket. According to Peter, the rusted rocket once traveled around to grocery stores as a promotional display. Kids could get inside and watch a little film while the floor beneath them rumbled.

Across from that is a Volkswagen van that has been fitted with an angled fiberglass shell to make it look like a spaceship. These conversion kits, called the “Phoenix,” were sold commercially in the 1970s, but Peter speculates that there are only maybe five of them left on the road today. Then in the center of the space is a towering UFO that looks like it was roughly slapped together out of sheet metal and housing nails. This craft was the life work of Al Thomas, a God-fearing inventor who built the prototype craft himself to prove his theory of magnet-powered flight. Peter says that when they searched the cockpit dome in the top of the UFO, the only controls they could find were a couple of light switches.

A person could spend years getting to the bottom of every incredible piece in the barn, and they’d just be scratching the surface. Peter says that the lower level contains even more treasures just sitting in storage.

Today, the total collection comprises thousands of items, and not even John and Peter are sure how many exactly. Instead of the flea markets that were once their stomping grounds, the Space Age Museum now gets many of its items online, with a focus on old photographs that help give better context to the actual objects in the collection. Somewhat due to space limitations, the museum doesn’t accumulate as many artifacts as it once did. “It has to be something unique and unusual that adds to the story, that isn’t already in the collection. Or it just speaks to us in its beauty and originality, that we’re compelled [to buy it],” says Peter.

While the museum’s location is kept secret, they would love to have a public space someday. They’ve talked to the Smithsonian and had items from their collection shown in the Museum of Modern Art in New York, but so far, no one has stepped up to invest in it as a public collection. There is now a book about the collection in the works, and Peter and his father hope it might spur someone to take notice and help preserve it far into the future. “The collection is just maturing with age, and I think about it being significant for an audience 500 years from now, to look back at this brief pivotal epoch when we transitioned from dreaming, into achieving space exploration, and really having a modern, imaginative, detailed vision of the future that infused our daily lives,” says Peter.

The exact mission and vision of what the Space Age Museum represents is somewhat difficult to nail down, but John and Peter know that they don’t want to do what other museums are already doing. Peter notes that aerospace museums have the scientific end of the era covered, and there are a number design and toy museums that also celebrate specific objects. But “no one is looking at the holistic mosaic of the cultural experience of the space age,” he says, apart from him and his father.

Scroll down for more amazing items from the museum’s collection.

Watch 245 People Rope-Swing Off a Bridge in Tandem

Thanks to support from the community and the world, the Doctor Who villain is rising again.
retrofuturistic

Jim Henson Wanted to Free Us From Paperwork

In his short film from 1967, the famed Muppet-maker welcomes workers to a paper-free future.
essential guide

This cross-country route takes in the 37 greatest pinball arcades in the U.S.
museums