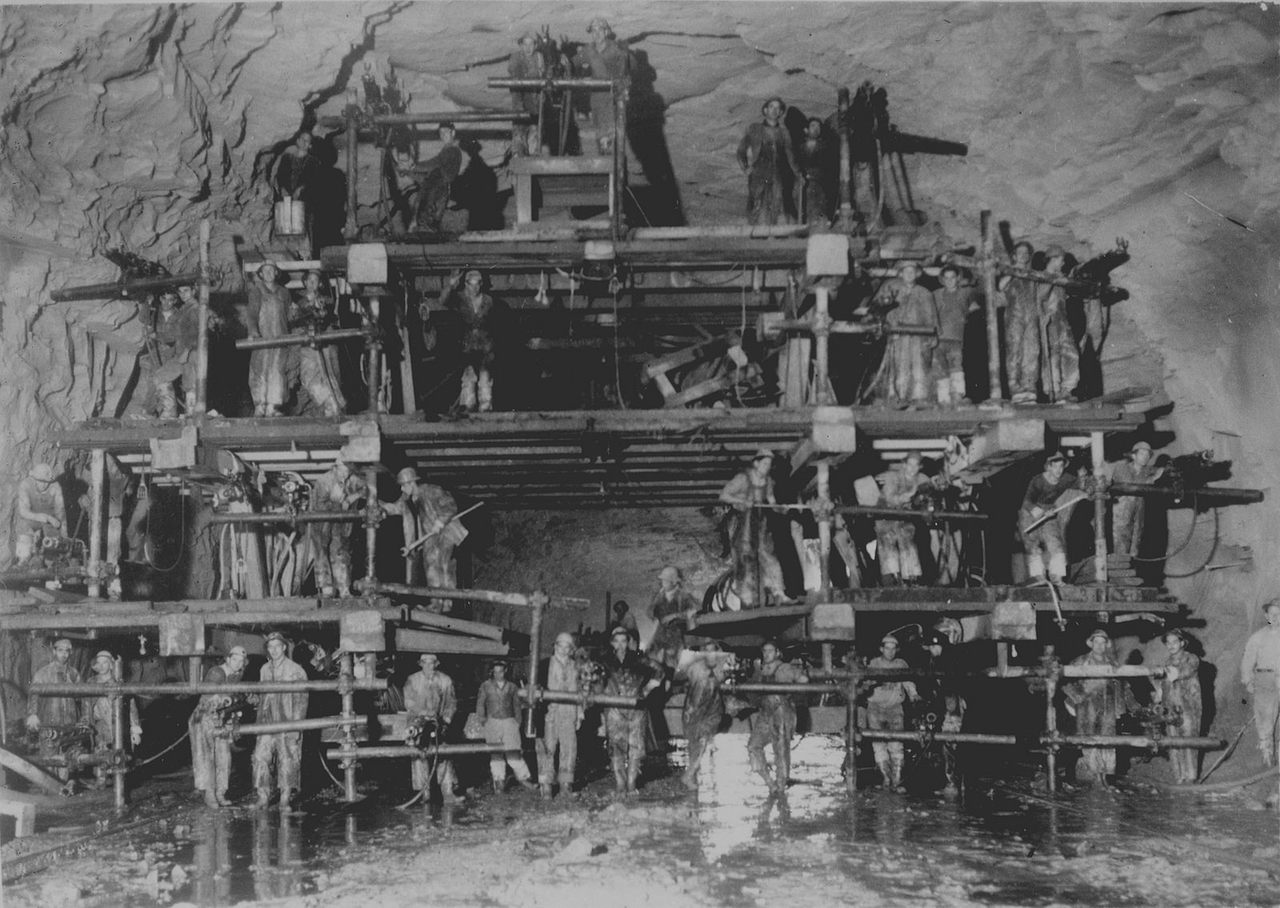 On November 3, 1955, anyone observing the east branch of the Delaware River, about two miles downstream from the New York town of Dunraven, would have been treated to an unusual sight: Katheryn Dickson’s stately 12-room home sailing across the water with the aplomb of a steamship. Dickson’s  two-story house was once a showstopper on the main street of Arena, the tiny upstate New York town where she was postmaster for 32 years.

Soon the valley hamlet, nestled in the Catskill mountains, would be under about 200 feet of water. The Dickson home escaped this fate: It was loaded onto a 21-wheel trailer, hauled by two Caterpillar tractors across the river, up the east bank, and transplanted in Dunraven. These are the sorts of improbable things that can happen when you have several years to prepare for a flood.

New York City is famous for its tap water. In July it scored the top prize (again) in a regional tap water taste test sponsored by the EPA. And this water is hard won; it arrives in Manhattan via a massive network of aqueducts, dams and reservoirs. Parts of this system, which comprise one of the world’s largest water supply networks, are more than a century old and were carved into being through feats of engineering astounding for their time. Sometimes, of course, the march of forward progress marches over people’s lives. This is one of those instances.

The city of New York started designing its Catskill water network in 1905; the Catskill Aqueduct System was finished by 1924, and by 1931 the city of New York had won the blessing of the Supreme Court to expand its upstate infrastructure. It was accepted that rural towns who stood in the way of the city’s water supply would be submerged. Pepacton, Union Grove, Shavertown and Arena were the four hamlets that resided in a valley slated to be transformed into the Pepacton Reservoir, the largest ever built by the city.

The lush, rural towns could have been plucked from a Hollywood backlot. Farmers paused their tractors in the road to confer over town business. Fisherman piloted rowboats through their stretch of the Delaware, overhung with trees and spanned by covered bridges. There was Sam’s Place, a formerly run down shack that its proprietor had transformed over three decades into a shop, barber and snack bar encircled by a white picket fence. One longtime Shavertown resident, Amanda Fletcher, was known to locals simply as “Aunt Mandy”. Stan’s Tavern had been serving up beers, Cokes, and food since 1939.

Reservoir construction had been underway for two years when a crowd of townspeople gathered at Shavertown’s general store in 1949. Every day the work inched closer to completion, and so did the time they would have to leave the idyllic village where their families had lived for generations. The city of New York would dole out compensation for their homes and relocation, but this was a small comfort to some, who didn’t even know when moving day would arrive.

“We are pushing construction as fast as the weather and the good Lord will permit us,” Irving Hite, president of  the Board of Water Supply told the New York Times. They hoped to finish the project by 1955 and promised not to “take a single acre of land until it is absolutely necessary.”

Meanwhile, the villages lived on borrowed time; farmers hesitated to plant or expand their herds.

“The city has no sentiment,” said Inez Atkins, postmaster and owner of the general store, where bespectacled men, women in ankle-length skirts and little kids gathered among walls crowded with drygoods and farming equipment. Atkins, who the Times described as a “short, alert woman of 62,” said, “This has been my home for thirty-seven years. I have friends and know my community. When they transplant me, it will be difficult. There’s no room for newcomers, especially old folks, in a new community.”

The city had already purchased Jack Bouw’s 600-acre Shavertown farm for $30,000 in 1947. ”When the city first came up,” said Bouw, “I realized that we would have to go. I made what I thought were the best possible arrangements. They were fair and they treated me well. Now, as quitting time gets closer, the thought of leaving my home, the buildings I built and the place I raised my family makes me sick.”

Others at the meeting bitterly declared the circumstances “the pestilence that has come down through the valley.”

As men hacked through the nearby earth and poured concrete to form massive tunnels, residents of the doomed towns were documented by the media as they wound down their daily lives.

“The inhabitants of the little village of Arena are decorating their homes and putting up Christmas lights for the last time,” reported the Oneonta Star in December 1953. That same month the paper recorded that the final New Year’s Eve party of Shavertown would be held in Fletchers Hall. After a night of square dancing, the building would be torn down immediately on January 1st.

Resigned, the towns began holding massive auctions; a moving sale on a grand scale. On a Saturday in April, 1954, a crowd of around 2,000 people poured into Shavertown to snap up items from the Atkin’s General Store, where five years earlier, anxious crowds had pondered their fate for the New York Times. Water officials pitched in, parking over 700 cars. A camera crew from NBC descended to film the event, and women served sandwiches, coffee, cakes and salads as an auctioneer sporting a silk hat and horn-rimmed spectacles awarded goods to the highest bidders.

Four months later, the town of Arena held their own auction in the August heat. At this one, the auctioneer led the crowd of thousands up and down the streets, selling off buildings one by one to be torn down for scrap. Arena’s melancholy auction attracted a boldface gawker in the form of novelist Fannie Hurst, whose life was once of such interest to the public that marriages where husbands and wives lived separately (as the writer and hers did) were once called “Fannie Hurst marriages.”

“I am sorry to see the homes and farms of this lovely old East Branch dismantled,” she told the Oneonta Star. “But I guess we can’t stand in the way of Progress.” Hurst’s attitude echoed the sentiment of the day—the building of the reservoir was met with awe and a sense of inevitability; the loss of the picturesque towns a bittersweet sacrifice to innovation.

The towns fell like dominos; the same month Arena held their auction, the abandoned town of Pepacton boasted a single building. The construction company commissioned to pulverize the hamlets had flattened everything except a 13-room house commandeered for their headquarters. On a Sunday night they moved all of their equipment out, set the building on fire, and watched it burn in celebration of a job well done.

“I wish we had invited hundreds of people,” the company’s vice president told the Oneonta Star. “In order that they might see how terribly fast a home can burn and how very important it is that people leave their homes when they discover them afire.”

There was also the problem of the towns’ non-living residents. In December 1954, the New York Times reported that officials were responsible for digging up and reinterring 1,330 bodies from the four villages. This means that the act of evacuating the four towns involved relocating more dead than living people. (Accounts of the Pepacton Reservoir relocations put the number of displaced townsfolk at just under 1,000.) The dead were rehomed to the Town of Andes, where the Pepacton Cemetery still sits. The city of New York still maintains it, and announced this year that it would spend $150,000 to spruce the place up.

Today the Pepacton Reservoir, which is 15 miles long and can hold 140.2 billion gallons, supplies about 25 percent of New York City’s daily water. The streets where townsfolk once strolled are now home to large brown trout, beloved by the fishermen who frequent the reservoir. Aside from the Pepacton Cemetery, the reservoir itself is the most visible homage to the submerged town. New York was fond of naming reservoirs after the communities they subsumed. The Neversink Reservoir, for instance, occupies the spot where the towns Neversink and Bittersweet once stood. The Cannonsville Reservoir was also home to a town of the same name.

The Board of Water Supply had made good on their estimate; by the end of 1955 the towns had been evacuated and water was slowly filling the finished Pepacton Reservoir. On a rainy day in October, then-mayor of New York City Robert Wagner toured the half-full site with a crowd of twenty officials, gazing down at the ghost town of Arena, which was not yet fully destroyed—although water crept towards its borders. He told a reporter that he was impressed with the “vastness of the city’s water domain” and that the city was getting its money’s worth.

Found: A Lot of Terrifying Creatures From the Deep Sea, Thanks to This Russian Fisherman

Cool, There's Water on Mars. But Does It Make Good Pickles?

What would happen if briny Martian liquid met an Earthling cucumber?
floods

The Wood screw pumps are mechanical marvels, but the turbines that power them are another story.
science

Oroville Dam's spillway crumbled in February, and now California is racing for a fix.
shipwrecks

Inside the consuming obsession with finding the 300-year-old Griffon.
Video • PinDrop

1:18
Want to see fewer ads? Become a Member.
From Around the Web
Thanks for sharing!