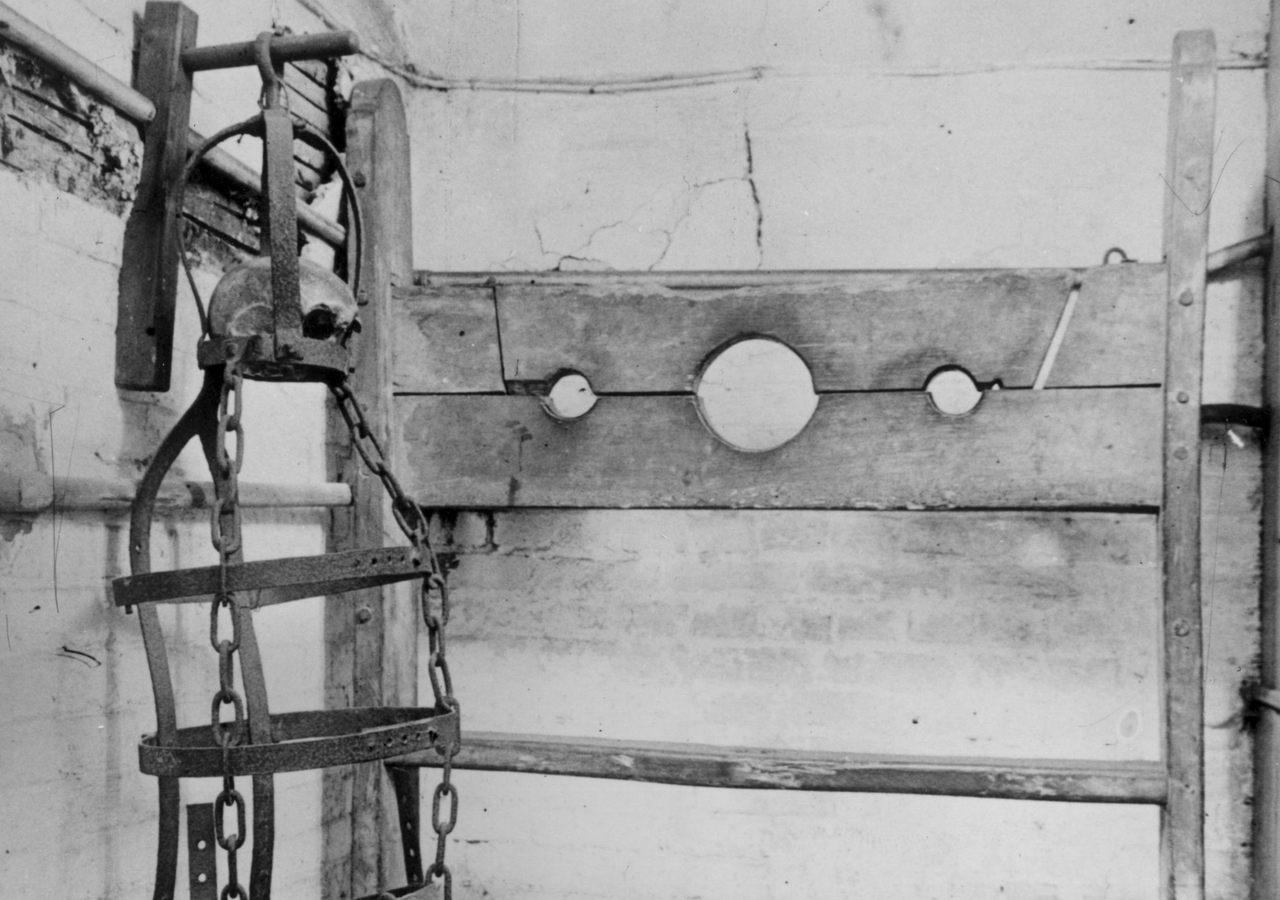 Gibbet irons and stocks on display in Winchelsea town hall in England. Within the gibbet there is a piece of skull belonging to the last man hanged in the equipment. Hulton Archive/Getty Images

Old Parr Road in Banbury, Oxfordshire is sweet: picture lush gardens, low-slung rock walls, and brick homes with brightly painted front doors. It is unlikely many who live there know that the road was named for a convicted murderer named Parr (his full name since lost to history) who was hanged in 1746, and then his body was closed up in a human-shaped cage, suspended from a post on the roadside, and left to rot where all could observe it.

In other words, Parr had been gibbeted.

Among the horrors our ancestors visited upon the dead, gibbeting is a highly specific one, although by no means unique in its brutality.* Someone who came to a bad end might find their head plunged on the end of a spike. After a horribly protracted execution, the body of a traitor could be divvied up and scattered across the land to decorate the walls of treasonous towns. (That rebellion doesn’t seem like such a great idea, now, right?) Gibbeting punished criminals even in death and warned the living to toe the line.

“It’s a grotesque thing,” says Sarah Tarlow, professor of archeology at University of Leicester and head of the Harnessing the Power of the Criminal Corpse research project. “The chains, the gibbet cages, are person-shaped and they are designed to hold the body together and hold the body into the shape of a person—and there are other features of the gibbet that put it into this really creepy zone between living and dead.”

Tarlow knows her gibbets. She has studied and written about them extensively, and in 2014 she undertook a quest to visit all the remaining gibbets in England, of which there are 16, most held by small museums, and one which still holds the skull of its unlucky occupant.

“What’s interesting about gibbeting,” says Tarlow “is that it didn’t happen that frequently. But it made a big splash, a big impression when it did.”

A gibbet on display at the Leicester Guildhall Museum. (Photo: Lee Haywood/CC BY-SA 2.0)

In England, gibbeting (also known as “hanging in chains”) peaked in the 1740s, even though it was officially mandated later by the 1752 Murder Act, which required bodies of convicted murderers to be either publicly dissected or gibbeted. Between 1752 and 1832, 134 men were hanged in chains. It was formally abolished in 1834.

When a gibbet was erected, it attracted big, jubilant crowds, sometimes in the tens of thousands. But, not surprisingly, actually living near a gibbet was not cause for celebration.

“It would smell bad,” Tarlow says. The stench of rotting flesh was so potent, people would shut their windows against it when the wind blew from a certain direction. “You can imagine what it was like just to have a decomposing body there, especially at the beginning when there was still soft tissue.”

In addition to the odor, gibbets were engineered for maximum horror. They twisted and swayed in the wind and creaked and clanked eerily.

Also unfortunately for its neighbors, the gibbet was not a fleeting visitor. They remained in place for decades sometimes, as the corpses inside were eaten by bugs and birds and turned into skeletons. Steps were taken to prevent people from removing them; the posts were often 30 feet or higher. One was studded with 12,000 nails to keep it from being torn down. They became landscape features; gibbeted criminals lent their names to roads (like Parr) and became boundary markers.

Because gibbeting was so rare, blacksmiths had little to go on when called upon to make a gibbet.

“Every time they make one, they’re reinventing the wheel, they’re starting from scratch,” says Tarlow.

Some were heavy, some were very loose, some were adjustable. One had a notch where a nose would go. In some cases, the gibbet held only the torso, allowing the arms and legs to dangle outside its confines. After a gibbet was removed (or fell down from wear) the gibbet and its components were sometimes turned into souvenirs, such as a post that was carved up into tobacco bowls.

Women were not gibbeted, but this wasn’t out of some kind of respect for the female corpse. On the contrary, says Tarlow, women’s bodies were a “hot property for surgeons and anatomists” and thus female criminals were offered up for dissection.

There were always some who objected to gibbeting for its barbarity, but the courts saw it as a way to prevent crime. This, Tarlow says, did not work. In fact, there are records of crimes occurring at a gibbet, such as the time a 16-year-old girl invited a friend to a picnic at the site of a gibbet and fed her a poisoned cake because the companion had been offered a job she coveted.

By 1832, gibbeting had fallen out of fashion, which only added to the public interest when two men were ordered to be gibbeted in August for unrelated crimes. Both gibbets were removed not long after being erected; the first by friends and the second by officials when chaotic crowds overwhelmed the scene, completely blocking the roads. This was the final nail in the gibbet post and two years later the practice was officially banned. Only the names of places like Old Parr Lane remain.

*Update 10/26/2017: The story originally stated that gibbeting was a medieval practice. While the practice does have medieval origins, it has been updated to reflect the generally later timeframe referred to in the article.

Or your dog, bunny, guinea pig, bird, or even turtle.
lazarus weektorture31 days of halloweendeathmedieval

It's not just Egypt that has embraced the practice.
medieval

Their challenging legacy has complicated preservation and study.
31 days of halloween

It's an interesting time to see the world through the eyes of blemmyes and demons.
Video