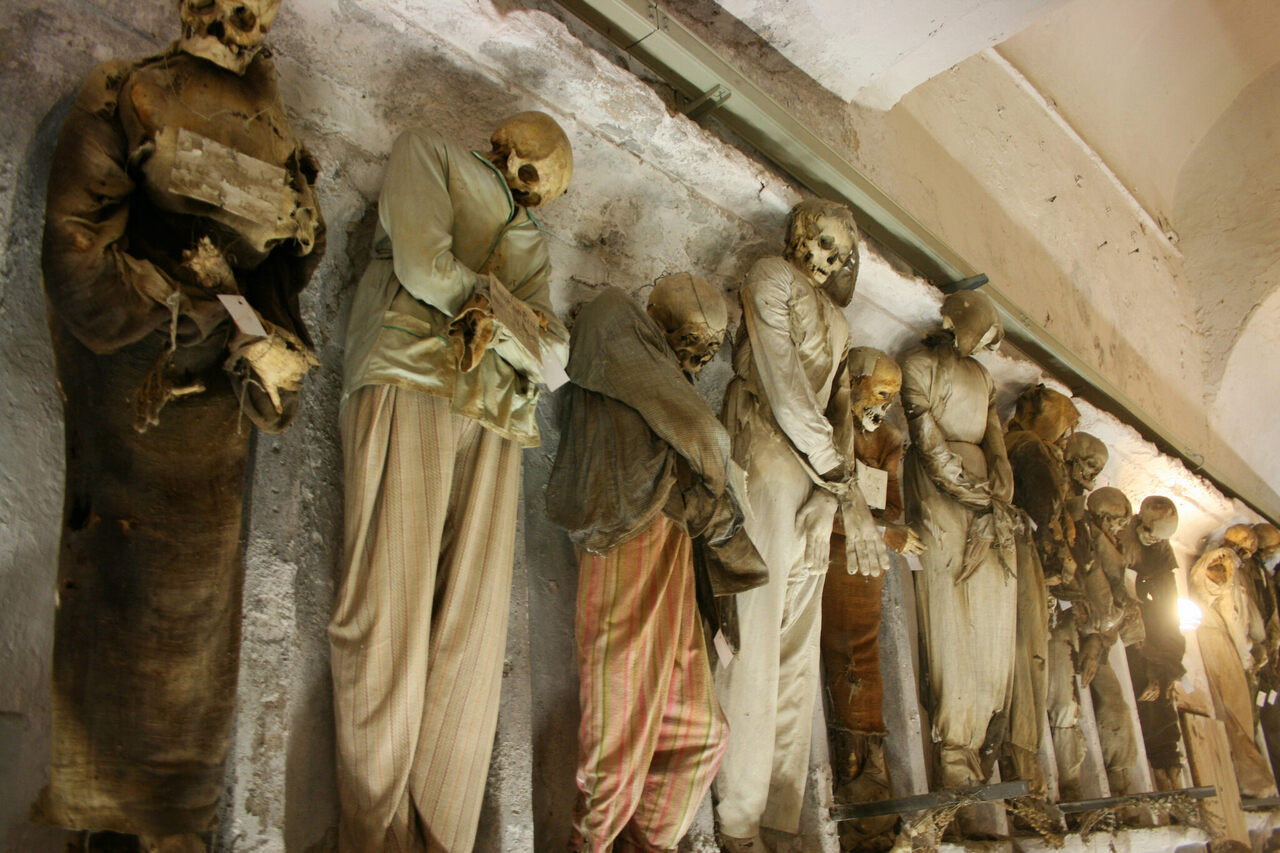 Self-mummified monk who wears sunglasses and has become a gecko hatchery.
Place

Mummification is, obviously, most closely linked with ancient Egypt, but it is a varied and culturally broad burial trend. Here are some examples of its more modern manifestations—from self-mummification, a brutal practice that only came to light in Japan in the 1960s, to more traditional embalming.

Fair warning: The images below might be disturbing to some readers. We are, after all, talking about preserving human bodies.

Feeling his death approaching, Buddhist monk Luang Pho Dang instructed his followers that should his body decay, he wished to be cremated. Otherwise, he wished to remain on display in hopes of inspiring others to follow the Buddhist way of life. Luckily for us, the latter proved to be his destiny. Like other noteworthy modern mummies, Luang Pho Dang died mid-meditation. Since that time his body has been displayed in a glass viewing platform within the Kunaram Temple. The monk remains seated in the lotus position, and his bodily tissue shows a remarkable lack of decay for the amount of time that has elapsed since his death.

The sunglasses, though, are a more recent development.

Dr. Gottfried Knoche and His Mummies

In the mid-19th century, an ingenious doctor by the name of Gottfried Knoche emigrated from Germany to Venezuela, taking with him a passion for accurately preserving the dead.

Fueled by a nearly unlimited supply of unclaimed bodies from his adopted nation’s civil war, Knoche developed a unique embalming fluid that would stave off the seemingly inexorable forces of death. This “mummification serum” prevented the decomposition of flesh without necessitating the removal of the specimen’s internal organs, a groundbreaking discovery for the era.

Knoche apparently had a knack for predicting death as well as staving off the effects of those already afflicted. When he felt the tingle that his own life was drawing to a close, he instructed Amelie, his ever-faithful nurse, to inject his (still living) body with his homemade embalming serum. Immediately thereafter it is said that he locked himself in his family’s crypt, never to be seen again.

Whatever secret acts transpired on his family’s land thereafter followed Amelie to her grave in 1926. Though scientists, morbidists, and bounty hunters alike have pillaged his homestead ever since, few vestiges of Doctor Knoche’s macabre experiments have seen the light of day. A photograph is rumored to exist in which the bodies of his mummies, including a few prominent government officials and academics of the time, are scattered about his lawn, though precise evidence remains hard to come by. In fact, despite modern experts’ best attempts, the best approximation to Knoche’s original “mummification serum” remains an imprecise concoction based on aluminum chloride.

Ever the utilitarian, Jeremy Bentham had set forth a plan for every atom of his deceased body, and his faithful friends and colleagues at the University College London saw to it that his will was followed to a “T”. After dying on June 6, 1832, Bentham’s body was first dissected as part of a public anatomy lecture. Then, his skeleton and head were preserved in a wooden container until the time in which his bones could be reassembled, padded with hay, and “lad in one of the suits of black occasionally worn by me.”

He decided that his place in all eternity should be none other than sitting upright in a chair positioned in the main lobby of his beloved University’s South Cloisters. Here he sits 99.8 percent of the time. Of course, even the deceased occasionally require a promenade; at the institution’s 100th and 150th anniversaries, Bentham attends the meeting of the Council College where records hilariously list him as “present but not voting.”

Only one element of his plan went awry: originally Bentham had requested that his head be embalmed and his glasses embedded in his face in order that he might most resemble his living self. Unfortunately a terrible accident in the preservation of his head grossly disfigured his face. No matter! A wax replica was formed and placed atop his neck, and the rather perverse original placed between his feet.

As many a child will tell you, those fun houses dragged around the country by carnies are terrifying. Speak to adults of a certain age, and they’ll not only agree but also provide ammunition for exactly why this is the case. The only exhibit needed in such an argument is Elmer McCurdy, an urban legend come true.

Shot dead on the Kansas-Oklahoma border by sheriffs in a scuffle after robbing train passengers of $46 and two jugs of whiskey, McCurdy’s body was embalmed while waiting to be collected by a family member. As it turns out, McCurdy had been enough of a scumbag that no one wanted him, even in death.

At first, his body was propped-up in the corner of the coroner’s office where curious onlookers could see the mummy for themselves. Eventually a pair of enterprising carnies posed as distant McCurdy relatives and hauled him off to parts unknown… until he surfaced in a Long Beach, California fun house in 1977 where he’d been used as a prop for who knows how long. His discovery was made by an unfortunate crew member for the television series The Six Million Dollar Man who was moving the “prop” out of a shot when the mummy’s arm broke, revealing a real human bone underneath.

Two-year-old Rosalia Lombardo is the most tragic of the modern mummies featured here. Cut down by pneumonia at the age of two in 1920, Rosalia’s father sought a locally renowned embalmer to preserve her body for the ages. Alfredo Salafia’s special mummification serum—formalin, alcohol, glycerin, salicylic acid, and zinc salts—had remained a mystery until very recently, though its effectiveness was never in doubt.

As one of the last bodies ever admitted to the Capuchin Catacombs in Palermo, Italy, Rosalia has been on display in a glass casket for nigh-onto one hundred years at this point. Her curls, eyelashes, and unparalleled appearance have earned her the name “Sleeping Beauty.”

X-rays have shown that her internal organs remain remarkably intact, and only in the past few years has her body begun to show signs of decomposition. In response, those responsible for maintaining the Capuchin Catacombs deemed it necessary to place Rosalia’s original coffin into a hermetically sealed glass container and relocated it to a drier part of the structure.

The titular head of the Buddhist faith in Russia knew his time was coming. Befitting a man of such piousness and wishing to share one last meditation with his fellow “lamas,” Dashi-Dorzho Itigilov, the twelfth Pandito Khambo Lama, left this world mid-chant. His followers placed him in a wood coffin exactly as he left this world: seated in the lotus position, bedecked in his saffron robe.

This was in 1927. Shortly thereafter, Buddhism went the way of all religions in newly communist Russia and Itigilov was left in eternal peace… or so government officials were led to believe. Exhumed twice in the course of 50 years, the astonishingly pristine state of the monk was kept under the radar until societal conditions were more favorable. No less than 75 years after his death, Itigilov’s body was reintroduced to the public.

Despite a complete lack of tissue paper wraps or formaldehyde, only the holy man’s eyes and nose are worse for the wear, having slightly retreated into his sinuses. But looks aren’t everything, right? Professor Viktor Zvyagin, an expert from the Federal Center of Forensic Medicine, took it upon himself to study samples of “The Most Precious Body” in 2004 and concluded that his tissue deterioration equaled that of someone who had died a mere 36 hours prior. Devotees interpret his incredible condition as evidence that he had attained the supreme state of emptiness espoused by Buddhism, while pilgrims seek his visage in hopes that it will heal their deepest ailments.

When it comes to religions, one of the freshest faces on the block is that of Summum, a gnostic, Christianity-based faith founded in 1975 by Corky “Ra” né Nowell. Resting somewhere between science fiction and new-age mysticism, Summum preaches the value of mummifying the dead in order that a) the soul transcends more smoothly from this life to the next, and b) is primed for cloning when science catches up with their beliefs.

At the time of his death in 2008, Nowell became the first human to undergo the nearly 1,000 hours of labor required to fully achieve modern mummy status. In preparation, Nowell had written a “spiritual will” that would be recited throughout the 77 days his body would be immersed in Summum’s special brand of mystery mummification fluid. To this day, his golden casket remains on display to visitors in Summum’s joint pyramid-winery headquarters.

Financially speaking, the church has decided that the best way to make ends meet in these tough economic times is by offering their specific brand of mummification to open-minded nonbelievers. Consequently, pet lovers (like you, dear reader!) can now have their companions prepared to meet them at the doorstep of the afterlife.

Why Presidential Debates Are Consistently Held at Obscure Colleges

10 Secure Places to Wait Out the Zombie Apocalypse

“Take the fresh, unspotted cadaver of a redheaded man..."
mummies

Scientists want to know if the forward-thinking philosopher had autism.
31 days of halloween

There is no end to the variety of metal torture devices of yore.
Video • PinDrop

4:46
Want to see fewer ads? Become a Member.
From Around the Web
Related