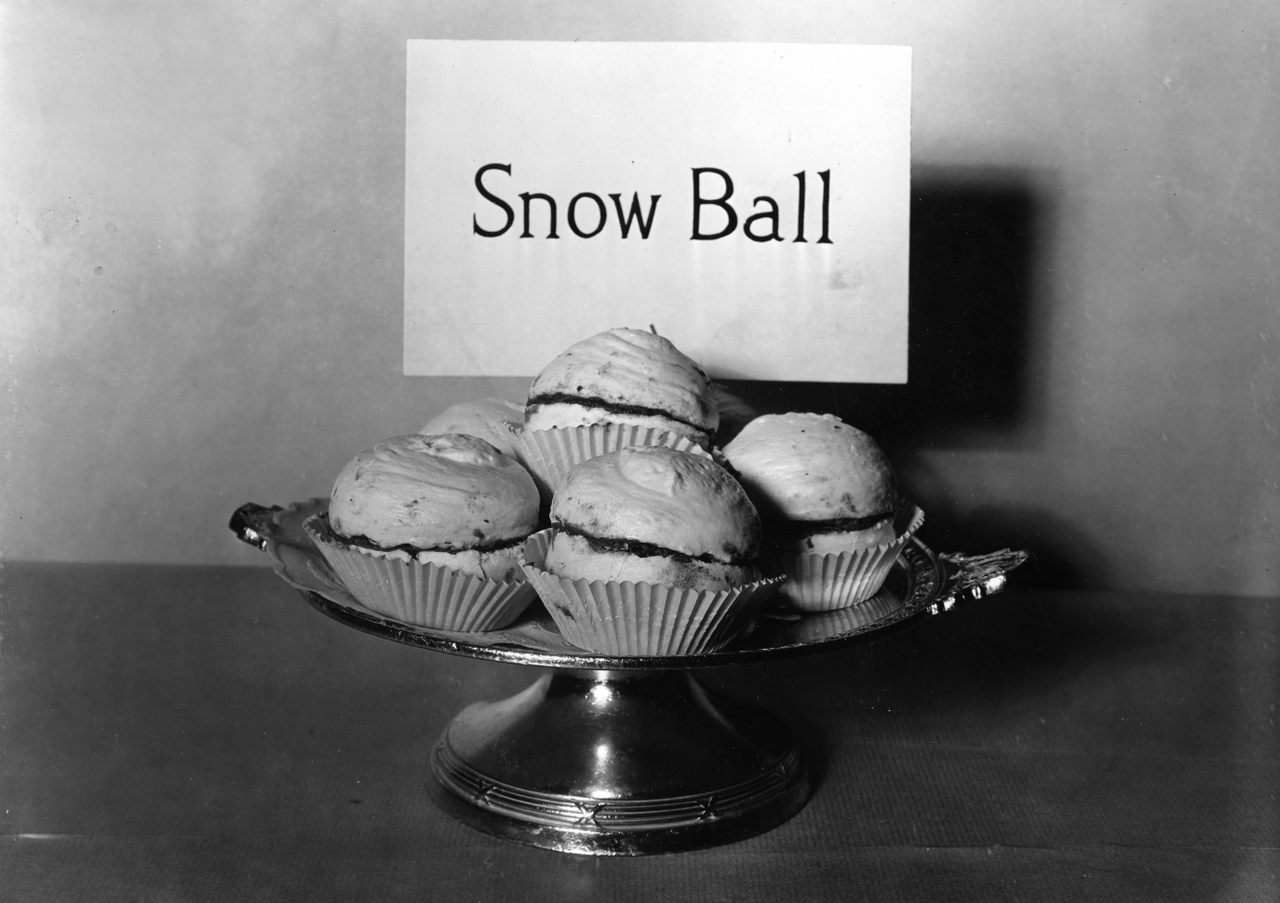 The U.S. Food Administration had to come up with creative ways to substitute ingredients during food rationing in World War I. NARA/4-G-30-37

When American families sat down for dinner in 1918, the table would often be lined with meatless and wheatless dishes. Depending on the day, a meal might start off with rolls made with a blend of graham and rye flour, a main course of broiled salt mackerel, and end with a piece of Lintz Tart—a pastry made without wheat flour.

After the United States joined the Allies in World War I in April 1917, the tightened food regulations altered the pantries, recipes, and diets of people on the home front. To help manage wartime supply, conversation, distribution, and transportation of food, the government created the U.S. Food Administration, helmed by future president Herbert Hoover. Part of the department’s role was to invent dishes—and reinvent favorite ones—to help Americans integrate alternative ingredients into their meals.

The U.S. Food Administration wartime photos and recipes, discovered by the National Archives and Records Administration, reveal almond paste cannoli, Alcazar Cakes made with potato flour, and tests to perfect the “War Bread” loaf. Confectioners even came up with candies made out of honey, molasses, and maple sugar instead of cane sugar.

“For me, it was exciting because I really enjoy this kind of history,” says Kelsey Noel, an archivist at the National Archives and Records Administration who helped digitize the photos. “Having this ability to see into the daily lives of the people who had to hold down the home front is really cool.”

About five months after the United States entered the war, Hoover led a campaign to eliminate waste and distribute food and resources to Allied forces in the barren battlefields of Europe. The effort relied mainly on volunteerism. By October 1917, the administration persuaded almost half of the nation’s 24 million families to sign pledge cards adhering to food rationing.

Beef, pork, wheat, dairy products, and sugars were rationed and sent to the soldiers abroad. Herds of cattle had been depleted or deliberately killed off because of the lack of fodder. Wheat was more easily transportable than other vegetables and fruits.

The administration stated that people didn’t need to eat less to save, but simply find substitutes for foods that were in high demand. Families shifted their diets to poultry and fish in place of beef and mutton. Wheat was replaced by potato flour, corn, oats, and rye in baked goods. Vegetable oils replaced animal fats.

“These particular recipes [from the U.S. Food Administration Educational Division] were mainly about finding other cereals to substitute for the wheat or wheat flour,” says Noel. The recipes feature “a lot of rye” as well as some bran.

For example, a batch of a dozen Biltmore Bran Muffins calls for bran and rye flour instead of wheat flour, and a half-pint of molasses instead of sugar. Sixty pieces of sweet Genoa Cake (which contains no flour at all) requires two pounds of almond paste, sugar, and 20 eggs all beaten together with corn starch and melted butter.

The U.S. Food Administration turned to home economists for advice on how to use these food substitutes, creating an Education Division. Individuals experimented with ingredients to see what tasted and worked best in dishes. During World War I, potato flour was extensively used for mixing with other bread flours, according to the U.S. Tariff Commission. It became a prime ingredient in “War Bread,” which was ubiquitous in homes and military kitchens.

“They seemed to be pushing potatoes,” says Noel, who has tried baked goods made with potato flour and deems them “very good.”

The administration found that potato flour’s ability to absorb moisture allowed bakers to produce a greater number of loaves than they would only using wheat flour in the bread. In 1918, the five potato flour factories in the United States produced 2,500,000 pounds of flour.

The department also came up with alternative recipes for sweets. The ships that imported sugar from the Caribbean were repurposed into military vessels limiting trade, explains Tanfer Emin Tunc in the journal War in History.

“Sugar has been costly, but whether this was due to a real shortage or to manipulation we did not know,” writes Mary Elizabeth who wrote War Time Candies, and proposed different kinds of candies made from honey, molasses, maple sugar, fruits, nuts, raisins, and chocolate.

Posters and billboards covered city buildings, advertising that “Food Will Win the War.” On certain days throughout the week, families were encouraged to design meals without meat or wheat flour. “‘Wheatless Mondays and Wednesdays, Meatless Tuesdays, and Porkless Thursdays and Saturdays’ became a mantra in many households,” writes Tunc.

The administration also discouraged stockpiling food, warning that food hoarders were “working against the common good and even against the very safety of the country.”

The campaign succeeded in doubling food shipment to Europe within a year, and reducing the United States’ consumption by 15 percent from 1918 to 1919.

Noel hopes the World War I recipes will inspire others to share their own family’s wartime recipes that have been passed down by generations. Recipes are unique in that they are kind of tangible history that people can interact with, explains Noel. “There’s something that’s very personal when looking at recipes and food.”

View complete recipes of some of U.S. Food Administration’s dishes and more photos below:

Norway Will Start Shutting Down Its FM Radio Tomorrow

The Golden Fourteen were largely forgotten—but a few veterans and descendants could change that.
food

How to Shop for the Revolutionary War

A cottage industry of craftspeople is dedicated to making accurate reproductions of objects used in 18th-century life.
Video • AO Docs