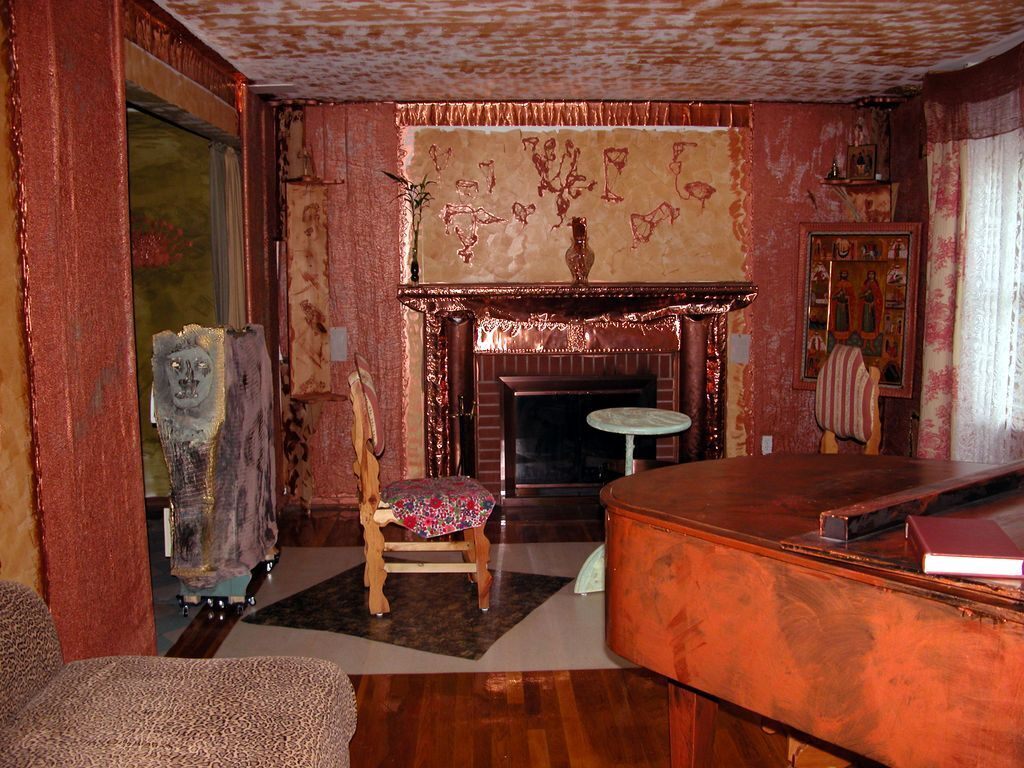 Inside the property at 24 Brentwood Drive, Connecticut. (Photo: Courtesy Zillow)

“Unique one of a kind finishing completed by a professional!” reads the Zillow listing for 24 Brentwood Dr., Avon, Connecticut. But as you page through the listing’s 40 pictures, you begin to wonder: a professional what?

The house isn’t just overdecorated. It’s grotesque. Every surface is festooned with blood-like sprays of paint, intestinal squiggles of shiny pink and copper, ghostly tattered cheesecloth, and the occasional rudimentary face. The overall effect is like you’ve walked into a haunted pancreas.

Not surprisingly, the listing has blown up on social media, where users are simultaneously fascinated and terrified. Tweets included “Glad we found the set for American Horror Story Season 8,” “We all hope to die at home and this house promises that,” and “Is this a house or a portal to the underworld?”

But the house isn’t a murderer’s lair, a horror set, or a Hellmouth. In fact, it’s a work of art.

As with any work of art, opinions may vary on whether it’s any good. But the truth is, 24 Brentwood Dr.—or “Brentwood, no. 24,” which is the name of the work—is both the headquarters of Fermata Arts Foundation and its first project.

Fermata Arts Foundation, founded in 2008 by artist Nikolay Synkov, says that its mission is “to aid in the preservation of peace” through “the synthesis of art, architecture, philosophy and poetry.” The group has branches in Ukraine and Georgia (the country), and partners with other organizations in Eastern Europe and the former USSR. Projects include a proposed Center for the Arts in Latvia and an art exchange between schoolchildren in Bulgaria, Italy, Kazakhstan, Latvia, and Ukraine.

Those who tweeted the Zillow link might be skeptical of the idea that it promotes peace rather than a sense of foreboding and unease. But Synkov, who designed and lived in the house, had a lofty vision for his work. Synkov describes himself as a devotee of painter and art theorist Wassily Kandinsky, and cites the introduction of Kandinsky’s “Concerning the Spiritual in Art” as an inspiration for “Brentwood, no. 24.” “Every work of art is the child of its age and, in many cases, the mother of our emotions,” the introduction begins. Perhaps that’s the reason the place looks like a uterus with problems.

In his portfolio, Synkov writes that he “embellished the rooms with details from his mind’s inner fantasy.” He also describes the title and inspiration for each room in “Brentwood, no. 24,” which Synkov bought in 2001 and then decorated and expanded, nearly doubling its size. The stairway to the second floor, for instance, is called “Main sheet of remembrance: there was no storm. It turned into a wind blowing some bubbles,” and is described thus: “On a breeze of memory we are blown as a leaf to rest upstairs..dreams..quiet.”

The kitchen’s title is “Diverse geometric form giving life”: “The plenty of the harvest manifests itself in the kitchen’s many surfaces.” Again, one is moved to wonder: harvest of what?

Synkov is also a poet, and his portfolio provides inspirational poems (in both English translation and the original Russian) for the rooms of “Brentwood, no. 24.” For the deck, “Land wharf of the Inoks,” he writes (in part): “Love towards your house / Will be the key to that cabinet.” On the other hand, the poem for one of the bedrooms, “Threshing accepted by the walls,” reads in part: “The laughter of Satan is walking the earth / Lots of tears and love are all gone / Fear has come for you, for myself,” which may feel more in line with the aesthetic. You can even watch a walkthrough video of the house while reading poetic source material, although the poetry collection set up to accompany the video contains different works than portfolio.

A piece called “Remembrances after the battle” or, the bathroom. (Photo: Courtesy Zillow)

Synkov has completed two other house projects, in Portland, Oregon. and Newton, Massachusetts. Both are significantly more restrained, making use primarily of his woodworking skill—which is on display in “Brentwood, no. 24” but somewhat diminished by appearing to be decorated with salami paste. Both houses have been toned down since Synkov lived in them (in the late ‘90s/early 2000s), but if the aesthetic appeals to you, his home design website is still up. (Whether it’s actually taking clients is less clear; the “client relationships” position is listed as vacant, as indeed are all the other positions.) There’s also an online store hawking examples of handmade furniture reminiscent of the interior decor at the Brentwood house—though there seems to be a problem with Synkov’s PayPal account, so it’s impossible to actually buy these treasures.

Like many artists, it appears that Synkov is unappreciated in his own time. According to Zillow, the Brentwood house was listed at $1.4 million dollars in March 2013, and by September 2016 it was down to $339,900. Kind of pricey for a nightmare factory, but a bargain to live in a work of art.

Way, way out in the Nevada desert, there's a perfect house for the posh recluse in your life.
hidden

There's still a brittle wad of paper to open up and examine.
hotels

Dinah is a local legend for saving Stenton House—but she should be remembered for much more.
Read more
Thanks for sharing!