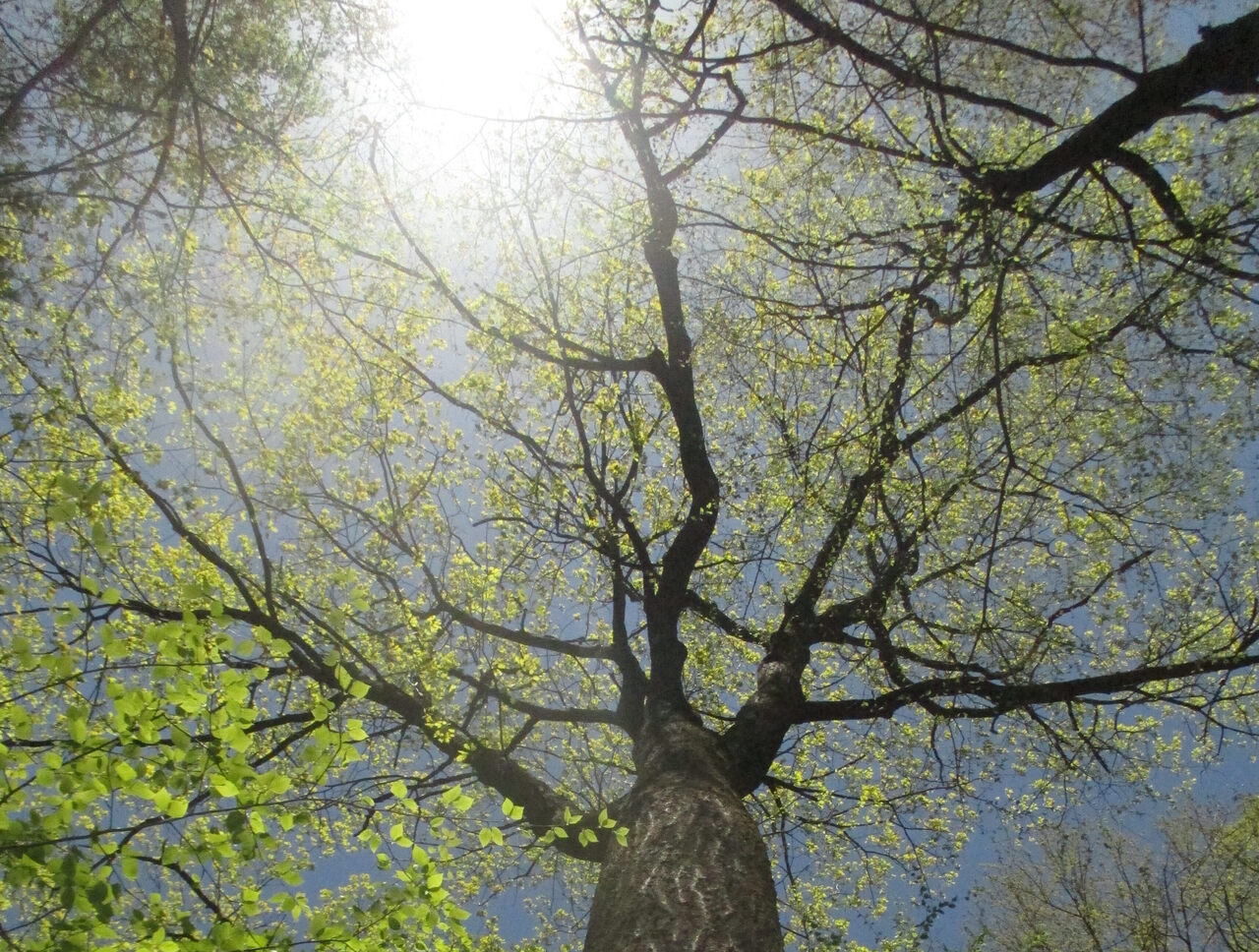 A northern red oak with something to say. Lynda Mapes/Harvard Forest
In This Story
Destination Guide

If you’ve been sweaty and miserable, resenting summer and aching for a cool breeze, you’re not alone. A northern red oak in the Harvard Forest in Petersham, Massachusetts, has been hot, too.

The tree hasn’t been complaining about it the way humans do; Quercus rubra doesn’t whine or get wrung out and cranky. But oaks—and the beech, birch, hemlock, white pine, and maple trees growing nearby—are going through “the same environmental things that we experience,” says Clarisse Hart, the director of outreach and education at the Harvard Forest, a 4,000-acre outdoor research laboratory owned and managed by the university. Humans are different from trees in so many ways, except for the ways we aren’t. Trees, Hart points out, are “absolutely experiencing heat, rain, growing, breathing, sweating, eating, doing all of these things that we do.”

For the northern red oak, that includes tweeting about a heat wave.

At 85 feet tall, this particular tree soars above many of its peers, and it’s more substantial, too, with a thicker trunk and a bigger crown. It’s also one of the most senior trees in its community, the forest’s Prospect Hill Tract. Much of the forest was flattened in the fierce, 186-mile-per-hour gusts of a hurricane that wailed through in 1938.

To Tim Rademacher, a postdoctoral fellow at Harvard University and Northern Arizona University, what really distinguishes this tree from its neighbors is that it is equipped with a slew of sensors that feed data to a bot that he built to communicate to the world what is happening in and around the tree.

Rademacher had considered other trees for the Twitter treatment, including a maple. (He really loves syrup.) But this one stuck out as a good candidate. The species is really common in the area, and Rademacher and his colleagues hoped that familiarity would make it relatable. “We wanted something everyone could find in their backyard,” he says. Also, this specimen already had fans from when, a few years ago, journalist Lynda Mapes placed it at the center of her book The Witness Tree: Seasons of Change With a Century-Old Oak, which used the Harvard Forest as a microcosm for the wonder of the leafy realm and the threats posed by a glut of carbon dioxide and a warming climate. (The paperback comes out in August 2019.)

The tree has been tweeting from the @awitnesstree account since July 17, 2019, when it introduced itself as “one of the oldest living organisms on the internet!” (Clearly, the tree hasn’t yet met @SUEtheTrex, the Field Museum’s chatty, 67-million-year-old Tyrannosaurus rex.)

The tree will continue to fire off automated dispatches roughly six times a week for the foreseeable future, drawing on data coming in from sensors wedged into the tree and scattered around its neighborhood. One of the sensors, for example, punctures the bark to measure the flow of sap. Because sap’s journey through the roots, branches, and trunk is affected by water and temperature, keeping tabs on it helps researchers understand how the tree is responding to heat and drought. “The last two days were extremely hot for July,” the tree tweeted on July 21. “When is this heatwave going to end?”

Other sensors, called dendrometers, measure seasonal and daily fluctuations in the tree’s trunk and branches. We know that growth rings document a tree’s expansion, year-to-year, over its life, but trees also bulge and shrink on a daily scale as they soak up water and then transpire it through their leaves. Scientists hope that understanding those patterns will shed more light on how the cells themselves help store carbon dioxide and offset greenhouse gas emissions. “This year, my trunk has grown roughly 1.5 mm (0.06 inches) in diameter,” the tree tweeted on July 24. It went on to describe its interior life, in a way: “The ‘late wood’ rings I am producing now look darker, and contain more carbon, than my faster-growing ‘early wood’ rings.”

The account also draws from images captured by the PhenoCam—a digital camera that snaps photos looking up at the tree’s canopy every 30 minutes—in addition to soil temperature, air temperature, humidity, precipitation, wind speed, and more gathered four times an hour at a nearby weather station. The PhenoCam is one of roughly a dozen positioned throughout the forest to collect information about leaves, wildlife, and more.

Scrolling through the Twitter feed is a bit like leafing through a diary. “We knew that we wanted the tree to speak in the first person,” Hart says. “That was important to us.” The team figured that the perspective “would be more engaging for the audience,” says Shawna Greyeyes, a rising sophomore at Coconino Community College in Flagstaff, Arizona, who is spending the summer working on the project as an intern at the Harvard Forest. “How many accounts are there with a tree speaking for itself?” At the same time, Rademacher adds, “We’ve tried to make sure that all of the messages are data-driven or environmental facts, things we know for sure, and not about how the tree ‘feels.’”

It’s a tricky balance. If the tree reports that it’s hot, that’s an objective observation—based on comparing the day’s temperature to decades of data—maybe playfully masquerading as a subjective one. But the tone is friendly and conversational—so much so that, a reader would be forgiven for forgetting that there wasn’t a brain, opposable thumbs, or a smartphone involved.

“My trunk and branches are on the fast track!” it tweeted on July 22, evoking a kid chuffed about a growth spurt. “My trunk has grown 0.255 mm and my branches 0.279 mm so far this month.” (Every little bit counts.) On July 21, it noted that the average temperature had worked out to 80.5 degrees Fahrenheit, making it “the 24th hottest day I can remember.” There is a growing body of research into what, exactly, plants “remember,” but this tweet was actually referring to the Harvard Forest data archive, which reaches back more than 55 years.

It’s pretty common for researchers to strap sensors to their subjects, from whales to trees, but this data doesn’t usually reach the general public in any direct, accessible way. “We want to have it be so that a person who knows nothing about trees could understand it,” Greyeyes says.

Rademacher also dreams about innumerable riffs on the concept, where almost anything could be outfitted with sensors and narrate its experiences of the changing world through a bot. “I’m dreaming of an ‘IoT,’ but an internet of trees, not things,” he says. An estuary could tweet about salinity and or storm surge, a mountain could tweet about erosion—and what a user chooses to follow could reflect their particular region or interests. “If you live in Arizona, you could follow a ponderosa [pine],” Rademacher muses. “We want to connect people to what’s happening around them.”

The project is funded by the National Science Foundation, and when that grant runs out, Rademacher will try to find a full-time position somewhere. Before he leaves, he hopes to set up the tweeting tree to communicate sustainably and self-sufficiently, so it can keep going without him. Scaling up the idea would require making the sensors and hardware a little tougher and more concealed, and cheap and self-contained, with a nearby wireless connection.

We can’t know how the tree “felt” about the recent heat wave in the Northeast, but Rademacher suspects that the data holds a sense of how the tree experienced a particular day. He imagines that on a scorching afternoon, the tree would stop photosynthesizing—the process is “too stressful”—and would shut the pores in its leaves to avoid losing water and wilting. He expects to see proof of this in the sap-flow record.

These specifics matter to researchers, but on a broader scale, the project is also a call for the casually curious—not just botanists and arborists—to look closely and sympathetically at our non-human neighbors. The trees, insects, birds around us—they’re all weathering the same changing world. We share it, after all.

Not by themselves, but the Archangel Ancient Tree Archive is out to show how they can help.
art

"HeyJTree" is built like a dating site, but it matches readers with the charismatic, threatened plants.
world record