In 1507, This Map Used the Name 'America' for the First Time - Atlas Obscura
Want to see fewer ads? Become a Member. 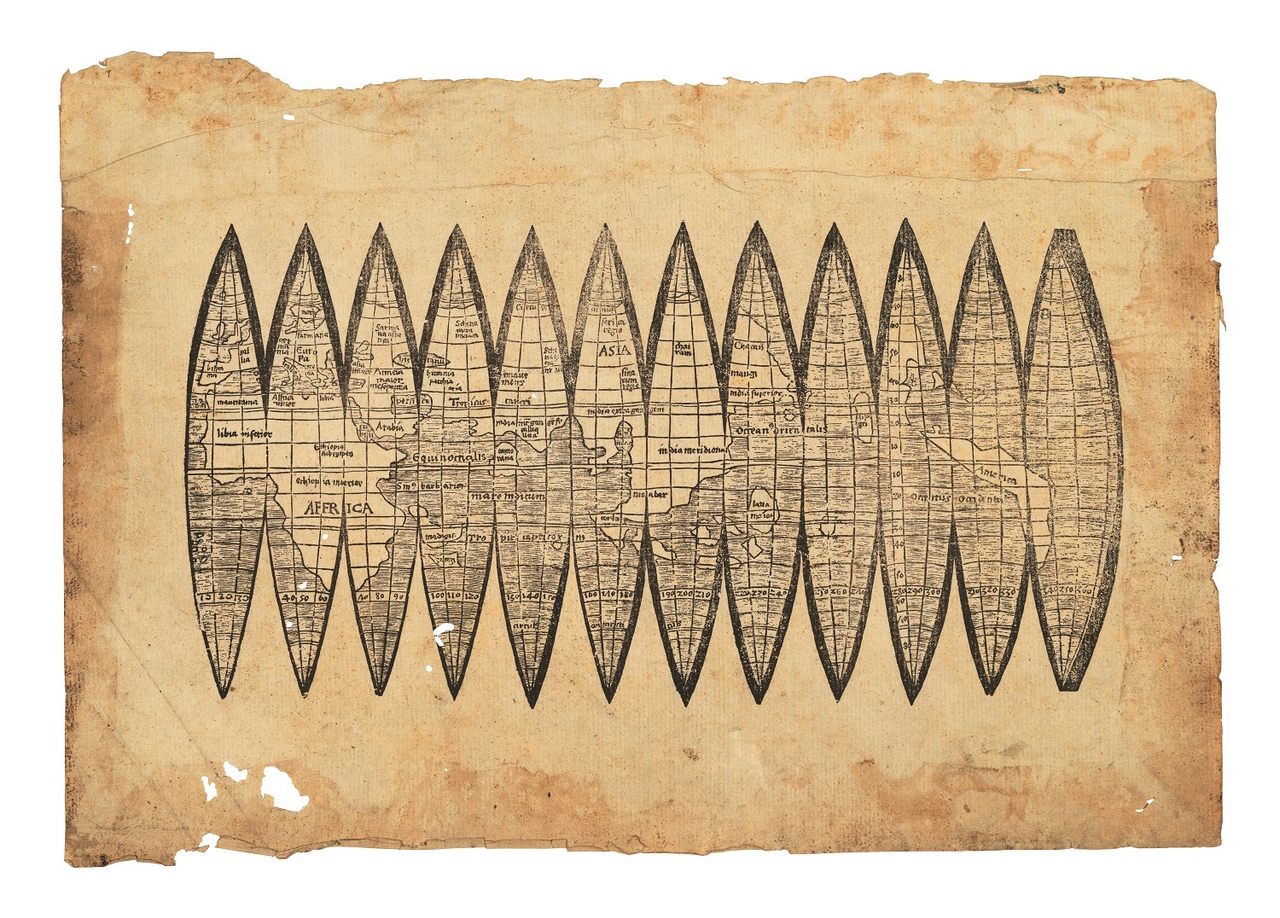 For sale: a Waldseemüller world map in the form of a set of gores for a globe, 1507. Courtesy of Christie’s

In 1507, German cartographer Martin Waldseemüller created a map unlike any other ever drafted in Europe. To the west, across the Atlantic, his map included the coastlines that European voyagers had only just reached for the first time. A few other surviving maps had done the same, but Waldseemüller went further.

On this map, these coasts continued until they outlined whole continents and defined another ocean, what we now call the Pacific. And on one of the continents, he wrote a proposed name for the place—America. Waldseemüller was the first European cartographer to imagine North and South America as separate continents, the first to create a full 360-degree view of the world that included the Pacific Ocean, and the first to use the name “America” to label any part of the world.

Only a few copies of this work survive. The Library of Congress holds the only surviving copy of Waldseemüller’s wall map, which measures 4-by-8 feet and is divided into 12 panels. Waldseemüller also created “gores”—maps meant to be cut out and pasted onto globes—with the same features. Only five copies of these survive, and Christie’s London is putting one of them on display, in advance of a December sale.*

Waldseemüller was raised in Freiburg, in what’s now southwestern Germany, a center of scholarship for many centuries. He was one of the foremost cartographers of his time, and he made these maps as part of his work for the Gymnasium Vosagense, a scholarly aristocrat-sponsored group that he joined in 1505. His assignment was to create an updated world map. Christopher Columbus had made his famous first voyage little more than a decade prior, and Amerigo Vespucci had crossed the Atlantic a few years later, and sailed far down the coast of South America.

Waldseemüller and his colleagues had obtained a translated version of Vespucci’s discoveries, and it influenced the details on these maps. Even that document, though, doesn’t fully explain how Waldseemüller came to imagine the Pacific Ocean. That would have required further, now undocumented, information—or a feat of inference unmatched by any other cartographer of his time.

Even Waldseemüller backed away from this radical cartographic vision in his later work, where the second ocean and the western coasts of the Americas were missing. The name he’d given these lands—America—did not appear in his later maps, either. Instead, South America was labeled “Terra Nova,” or New World.

Waldseemüller’s wall map, though, had what in the 16th century counted as a massive print run of 1,000 copies. Its influence was strong enough that the name “America” stuck. But by the early 20th century, Waldseemüller’s original maps had disappeared, until another German cartographer, Joseph Fischer, rediscovered a copy in a castle belonging to the family of Prince Waldburg-Wolfegg. For close to a century, the Library of Congress kept its eye on the map, before finally acquiring it in 2003 for $10 million.

Five copies of the gores survived as well, including one that had been cut out in order to paste on a globe. The copy for sale at Christie’s was used as scrap for bookbinding, according to the auction house, and belonged to Arthur Drescher, a British paper restorer. Drescher died in 1986, but his family recently resurfaced it.

Compared to the wall map, the gores are simple works. The continents are outlined without detailed coasts or place names. But the crucial details remain: continents flanked by two oceans and labeled America.

Update 12/11: Christie’s has withdrawn this map from auction, after outside experts raised concerns about its authenticity.

In Victorian England, was there anything leeches couldn't do?
americamap mondayexplorationmapsfeatures

A mariner's take on a town in "New Spain" was notably accurate for its time.
maps