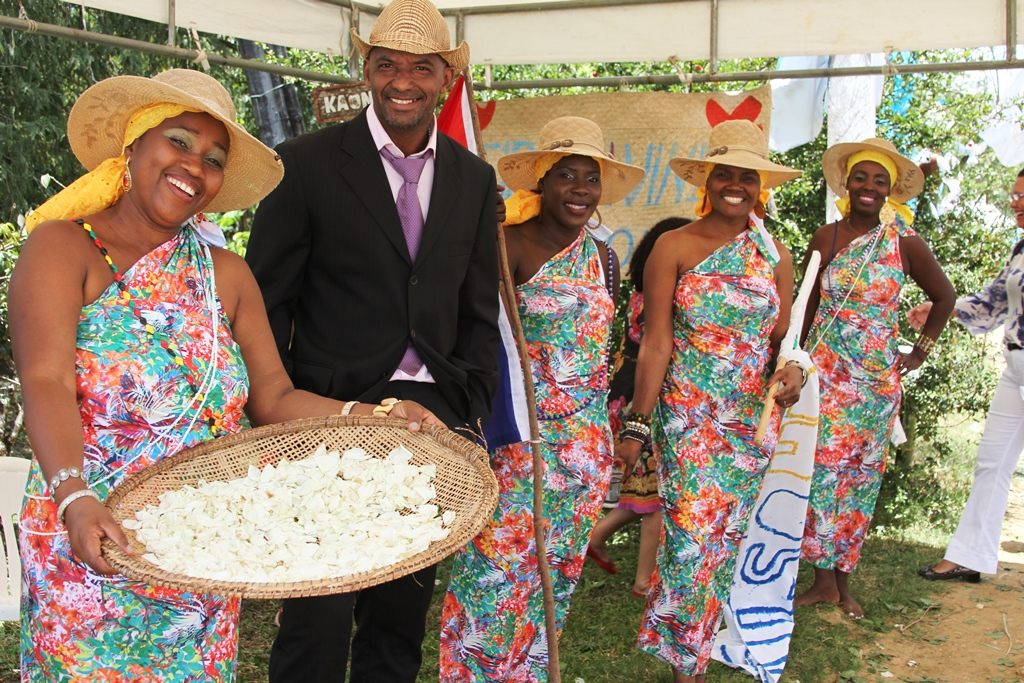 A scene from the 11th annual oyster festival. CC BY-ND 3.0 BR
In This Story
Destination Guide

It was a scorching hot Saturday in the Recôncavo region of Bahia, Brazil, but instead of heading to the beach or Paraguaçu River, hundreds of people had chosen to dine alfresco at Quilombo Kaonge, a community located far from the main road and deep within the trees and bramble. On the menu: freshly caught oysters served fried, raw with a spritz of lime, stewed in a moqueca (seafood stew), or grilled over an open fire. While classic Samba do Rio blared from the stereos, partygoers sang along from their seats. Elderly Black women sat in circles fanning themselves, some in towering headwraps and many in straw hats, while those with relaxed hair consistently dabbed their edges. As the day progressed, the crowd shifted to Afro-Brazilian youth on their phones, who took pictures to share on Whatsapp and danced to bass-focused pagode music.

This was the 11th annual Festa da Ostra (oyster festival) held in October. During the festivities, there was acknowledgement of a Black past and a celebration of its future, and families, neighbors, and travelers from as far as São Paulo had come to take part in it. They were celebrating a community that emerged from pain and sacrifice: Before Brazil abolished the slave industry in 1888, some 4 million Africans arrived in chains in the ports of the Recôncavo. Of those who escaped, many found refuge in quilombos—well-hidden communities built in densely forested mountains and swampy lowlands by formerly enslaved people. The money raised by the Festa da Ostra helps maintain Quilombo Kaonge as an independent center of Black life—even as Brazil’s new president disparages quilombos’ existence.

Brazil’s involvement in the transatlantic slave trade dates back to the 1400s, and the country ultimately “imported” more enslaved Africans than the United States, Cuba, Jamaica, and Haiti combined. For the Africans who survived the Atlantic passage—and found themselves in Bahia’s sugarcane fields or the country’s Southern mines—resistance looked like revolts, covert religious ceremonies, and quilombos.

The name quilombo comes from the Kimbundu word “kilombo,” which means “war camp” or “hideout, and originally described a temporary residence for nomads or displaced people. At its peak, the Palmares Quilombo, which was founded by two of Brazil’s most revered Black leaders, Zumbi dos Palmares and his wife Dandara dos Palmares, was home to more than 20,000 inhabitants. Quilombos and the people who lived there, known as Quilombolas, lived separate from Portuguese rule under a political system rooted in the Bantu traditions they had come from (community, balance, and agriculturally based). Although Brazil’s census does not include national data on quilombos, NGOs estimate that there are more than 1,500 across the country with more than 100 whose land claims are still pending. Kaonge, which has been politically recognized, is a matriarchal community led by its spiritual leader and griote (storyteller), senhora Juviani Viana.

“My entire family has lived here for generations,” senhora Viana tells me. She is sitting in the middle of the square, keeping her eyes closely trained on everything happening around her. “I took on the role of leader after my oldest sister passed away a few years ago.”

Now in her late 50s, she walks with the aid of a wooden stick. “I used to be able to help make everything we eat and sell here: the dende oil, the pimenta, the oysters. But now my body just can’t take it,” she says with a resigned laugh.

During the festival, seafood is the most popular option, and oysters are the main course. Which is fitting, since oysters have long been key to quilombos surviving and thriving.

Historically, Brazilians viewed oysters as peasant food, considering them too much of a hardship to both find and properly clean. “People thought oysters were dirty food,” says senhora Viana. “Black people couldn’t afford to eat beef and pork, so we made oysters something that we could enjoy.”

Many quilombos were built next to river beds with significant oyster populations that fed their free inhabitants. In addition, crushed oyster shells were used as ancestral summoning tools during sacred ceremonies that continue today, and oral stories passed through generations speak of Quilombolas marking the way to the hard-to-find quilombos with oyster shells.

In the neighboring city of Salvador, high-end restaurants now charge upwards of 120 reais ($28) for an oyster dish, one you can easily purchase for 20 or 40 reais at Quilombo Kaonge. Kaonge sustains itself with oyster farming, and the weekend festa raises money that funds better harvesting equipment, school tuitions, more than a dozen grassroots community organizations, and the daily upkeep of homes. In a country where white workers earn 72.5 percent more than black and brown workers, the economic self-sufficiency of Kaonge is both a relief and an inspiration. The weekend long get-together is an opportunity to not only revel in the successes of an Afro-Brazilian settlement, but also acknowledge Black ingenuity and lose yourself in untempered Black joy.

Senhora Anna, a Kaonge elder, says it’s because she grew up here that she has such a compassionate love for Black people. “Everyone in my family is Black—that dark African Black,” she says, as she sits next to fried oysters she has placed in to-go boxes so people can take them home. “I just think it’s so beautiful.”

Like all societies that reside on the margins of society, caught between legitimacy and erasure, not everyone finds comfort within the community. Senhora Anna and her husband sent their three sons, who they raised in Kaonge, to Catholic schools, which are the majority in Brazil’s public education system. Her three sons then decided that the African traditions and spiritualism practiced on their quilombo were paganism. They moved to the city and rarely come to visit. “These things happen,” says Senhora Anna. “They don’t believe in what I believe in.”

As radically subversive as the history of quilombos is, the majority of the settlements, much like Native American and First Nations reservations in the U.S. and Canada, have very poor living conditions. In 2007, the most current and extensive report regarding quilombos’ quality of life found that 91 percent of Quilombola families had a monthly income of less than $190, compared to the average national income of $204. The same report discovered that the number of malnourished children in quilombos is 76 percent higher than the national rate. It’s inside this inescapable reality that Quilombo Kaonge exists as a space that has navigated inequitable systems of power and access to create a safe place for its residents.

In 1986, Afro-Brazilian Congresswoman Benedita da Silva created a law that would allow quilombo residents to own their land. This was meant to halt the hundreds of cases where Quilombolas were forced off their land by farmers or the fast-growing eucalyptus monoculture business, which plants acres of the tree to make paper. In 2003, President Luiz Inácio Lula da Silva expanded on this law by issuing a presidential decree classifying Quilombola as an ethnicity with a distinct history and culture that, when claimed and proven, would give descendants full land rights.

But government bureaucracy has made claiming land rights a slow and unnerving process, one that could be quickly and easily undone by President Jair Bolsonaro, whose election last October has meant a rise in ultra right-wing political rhetoric. During a 2017 interview while still a Federal Deputy, Bolsonaro was asked about the importance of quilombos and safeguarding their history. “I have been on a quilombo. The quilombolas don’t do anything,” he responded. “They are not even good for breeding anymore. More than R$1 billion is spent on them.” As of January this year at least 230 quilombo and indigenous territories were under threat after Bolsonaro transferred quilombo and indigenous land claims to the Ministry of Agriculture—a ministry that largely favors major farming and mining companies.

This disdain and anti-Blackness has meant heightened uncertainty and fear regarding quilombos and their autonomy. “Look things are difficult right now,” says Senhora Viana. “But we have always found a way to be here. My parents did it, their parents did, and we will too.”

There is a tangible sense of ubuntu, the Zulu word for humanity, on Quilombo Kaonge. The tenet of ubuntu, “I am because we are,” is a deeply African principle, and it’s one that almost four centuries of slavery and subsequent decades of systemic and structural anti-Black violence have failed to break down. Because during one October weekend, in a small community of less than 50 families, copious amounts of cerveja were consumed and one man and his two sons shucked and shared 40 kilograms of oysters and, on the last night, as people slowly filed out, Senhora Viana delivered a blessing: “We are the children of Obàtálá, the children of Iemanjá. Go in peace.”

Why North Carolina Is the Most Linguistically Diverse U.S. State

It's where legends like Tina Turner and Ray Charles launched their careers.
Video