Eat Like Royalty With This Cookbook From the Emperor Who Built the Taj Mahal - Gastro Obscura
Want to see fewer ads? Become a Member. 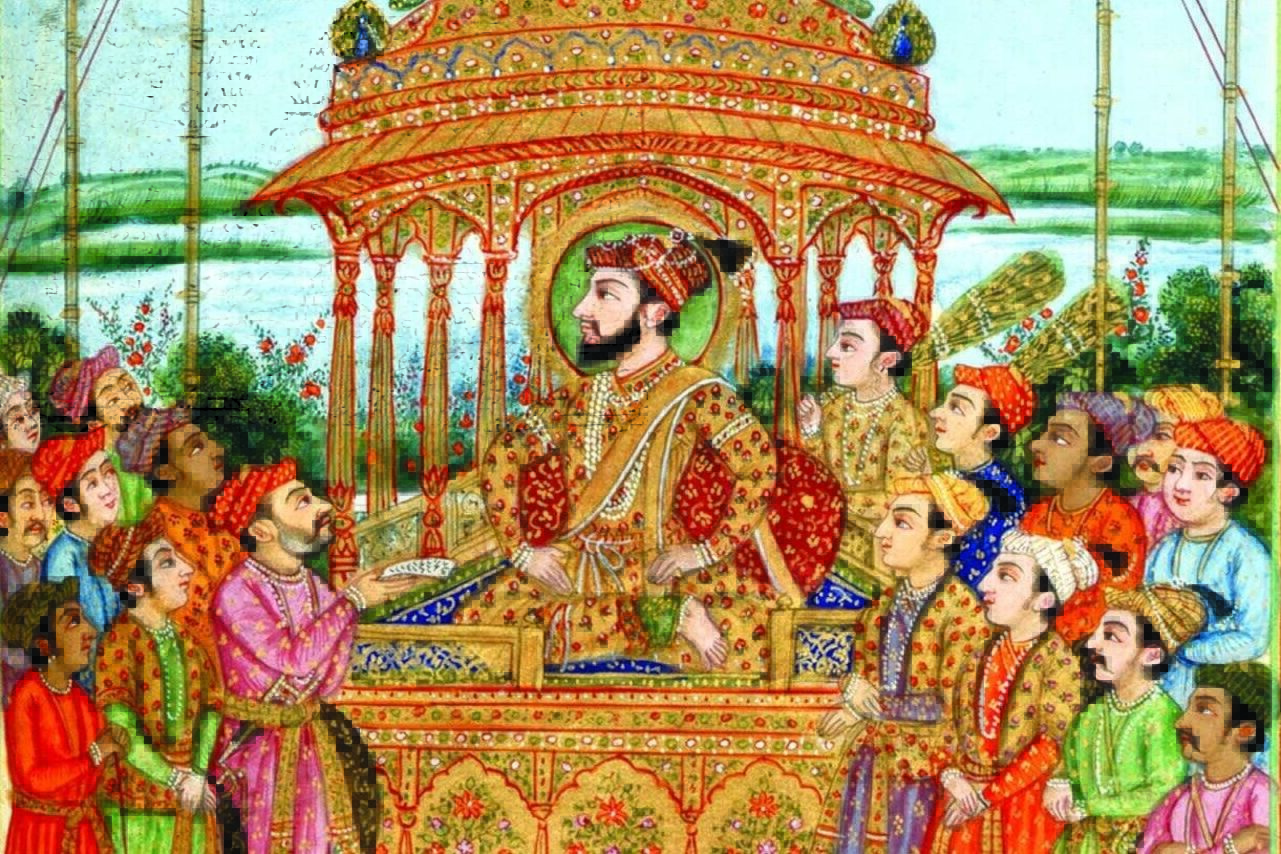 Shah Jahan on the Peacock Throne at Delhi receiving deputations. The British Library and Roli Books/Used with permission

It was the mid 1600s, and Friar Sebastian Manriquea, a Portuguese priest who had come to visit the Mughal Court, wanted to witness a royal supper. It was a rare sight. The Mughal emperors, who ruled territory across the northern Indian subcontinent, usually didn’t dine with anyone but their wives and concubines. But on this day, Shah Jahan—the Mughal ruler who commissioned the Taj Mahal—would be dining with his wazir, advisor Asaf Khan. Sensing an opportunity, the curious priest found an ally: A court eunuch, one of the many third-gender people who enjoyed an elevated status as guardians of women in the Mughal palace, smuggled the Portuguese friar into the inner chamber to watch Shah Jahan at his meal.

The exact meal Manriquea witnessed has been lost to history. But thanks to The Mughal Feast, a recently-translated Mughal royal cookbook, we have some ideas. Salma Yusuf Husain, a Persian-language scholar and culinary historian, dubs her version of the book—which includes literal translations of recipes as well as cultural and historical notes—a “transcreation” of the Persian-language Nuskha-e-Shahjahani. One of the only extant culinary texts from Shah Jahan’s court, the manuscript had sat in the British Library for years without being available in English. Illustrated with ornate Mughal miniature paintings, the new translation details an elevated courtly cuisine, in which Indian ingredients such as mango and tamarind fused with Persian soups and meats, and every grain of rice was covered in costly silver.

The book’s recipes for qormas, biryanis, and pulaos reveal the roots of one of India’s most globally recognized cuisines: Mughlai food, a culinary tradition descended from the Mughal court, enjoyed across North India, and disproportionately exported abroad. Walk into an Indian restaurant outside of South Asia today, and you’re almost guaranteed to encounter menu items descended from Shah Jahan’s kitchens.

The Mughal Feast reveals a cuisine shaped by conquest. The Mughals came from Central Asia, and traced their roots to Genghis Khan and to the great Central Asian king Timur. The first Mughal king, Babur, rode into the subcontinent from Kabul with his followers in 1519. He had conquered his way across North India by the 1530s. When Babur arrived in India, says Husain, he would have found a relatively simple cuisine which was, at least among certain Buddhists, Jains, and caste Hindus, often vegetarian. Used to a nomadic lifestyle, Babur brought meat. While the kebab—cut or pounded sections of meat cooked in a tandoor oven—became an art in North India, its early counterpart in Babur’s army was strictly utilitarian. “They would take the meat piece, put it under the saddle, sit on it, and gallop,” says Husain.

Under Babur’s descendants, Mughal cuisine became increasingly complex. Emperor Akbar, who married a Rajasthani queen, brought influences from that desert region; Emperor Humayun, who was exiled to Iran, returned with a taste for Persian food. But, says Husain, the most intricate flowering of Mughal cuisine came under Shah Jahan. Compared to his bellicose compatriots, “Shah Jahan was not a warrior; he was never a soldier,” says Husain. “He loved to eat.” During Shah Jahan’s reign, the empire was relatively stable, and he frequently entertained visiting dignitaries. Manriquea may have been the only European to spy on the emperor’s dinner, but there was extensive contact between European delegations, often made up of Christian clergy, and the Muslim Mughals. In one incident from Shah Jahan’s youth, the Mughal royals and their Jesuit visitors celebrated Easter in a feast that included Easter eggs, tight rope walkers, and the burning of a firework-stuffed effigy of Judas.

So what did Manriquea witness in the Shah Jahan’s chambers? A typical meal, served on gold plates, might have included thick, sometimes-leavened naan bread; Persian-inspired aash or soup; bharta or smoked mashed vegetables; meat kebabs; and pulao or zeer biryan, rice and lamb cooked on a low flame for hours until the lamb juice suffused the rice. Dried fruits and nuts, such as raisins and cashews, were common flavorings, but some of the more complex spice mixtures of contemporary North Indian cuisine were not. Decorations, from warq silver-coated rice to intricately colored desserts, were lavish. Everything that could be coated in sugar syrup, including savory kebabs and biryani, was. Even the water was high-end: The food was cooked in a mixture of rain water and water from the Ganges river, considered sacred by Hindus.

Some ingredients that we today consider typical of Indian food don’t appear in the Nuskha-e-Shahjahani. “The use of potato came in the later period,” says Husain, as did chillies and tomatoes. (There was no spicy butter chicken in tomato-based gravy during Mughal times.) Chillies were brought to India by the Portuguese, and used originally as a medical treatment. Love for their hot flavor, however, quickly spread, resulting in the chilli-heavy Indian cuisines we know today. By Muhammad Shah Rangeela’s reign in the early 1700s, chillies had become common in North Indian cuisine, and they remain so today.

While some recipes in The Mughal Feast may be challenging for modern home cooks—one recipe calls for boiling lamb liver multiple times before frying it and shaping it to resemble bone marrow—Husain says the recipes can be replicated at home. “It’s a canvass,” she says. “Fill in the colors.” Today’s curious gastronomes may not be able to sneak into Shah Jahan’s inner chambers, but by trying out a recipe from The Mughal Feast, they can still eat like emperors.

2. Add half the mangoes to the stock, and cook until tender. Remove from heat and keep aside to cool. Squeeze the mangoes by hand to extract thick pulp. Strain and keep the mango stock aside.

4. Cut the remaining mangoes into pieces, boil in water, and then float in this sugar syrup and cook until tender. Remove from the syrup and keep aside.

5. Add the syrup to the mango stock and parboil the rice in it.

6. In a separate pan, spread the cumin seeds, followed by the lamb pieces. Add the whole spices and 2 tbsp sweet stock; cook on low heat until syrup is absorbed.

7. Spread the rice over the lamb, pour some ghee, and cook on dum.

8. While serving, arrange the mango pieces on the pulao and garnish with fried dry fruits.

Cooking methods as listed above:

Dum literally means ‘breath’. This process involves maturing the prepared dish after the completion of the cooking process. The pot is sealed as tightly as possible with dough or a heavy weight on the lid. This pot is then placed on hot ashes or an iron griddle on very low heat. A few coals are also placed on the lid, if possible. This process allows the individual flavors of the dish to blend into their own juices. The pot should be opened only before serving.

This is a meat stock. Boil meat with or without bones with salt, coriander seeds, onions, and ginger. When tender, separate meat pieces from the stock and keep aside. Strain the stock through a muslin cloth. For 1 kg meat, use 4 cups water if cooked in pressure cooker, or 8 cups if on coal fire. Adjust ingredients according to recipe.

Boil 2 cups sugar with 2 cups water, and then cook on low heat, adding juice of 1 lemon. When syrup is of one-string consistency, remove. Adjust ingredients according to recipe.

Excerpted from The Mughal Feast: Recipes from the Kitchen of Emperor Shah Jahan by Salma Yusuf Husain, published by Roli Books.

The 1976 book included contributions from the Black Power and Gay Liberation movements.
wwii

Make bread fit for a pharaoh and a sweet treat out of tiger nuts.
Video

Once where royalty entertained guests, this opulent table is now one of the longest in the world.
Ranchi, India

This women-run eatery and cooking school is putting India's long-neglected tribal cuisines back on the menu.
Want to see fewer ads? Become a Member.
Related

By making pizza approved by the Communist Party.
Read more
Thanks for sharing!