What Does a Failed New Jersey Utopia Have to Do with the Algonquin Round Table? - Atlas Obscura
Want to see fewer ads? Become a Member. 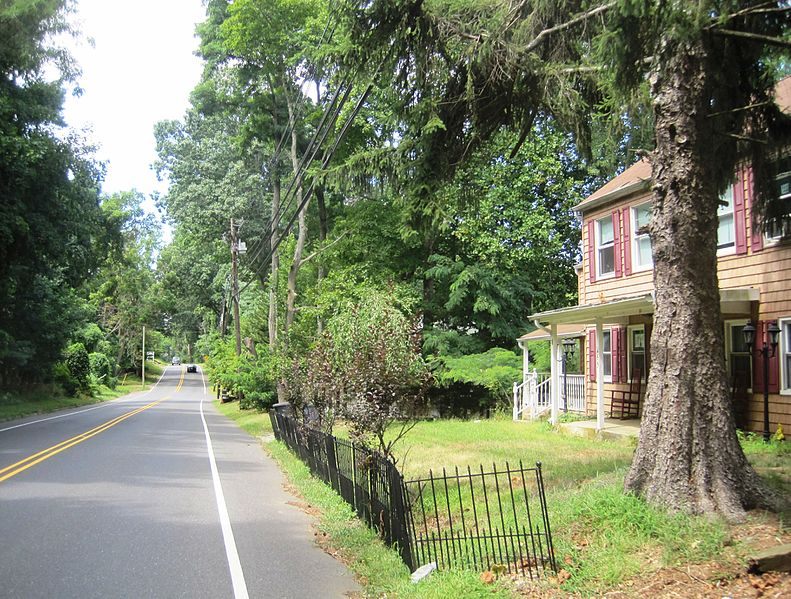 Phalanx Road is a quiet road that runs through the towns of Lincroft and Colts Neck in central New Jersey. It’s not unlike many thoroughfares in places where the suburban and the rural quietly blend into one another. But if you look closely enough at the side of the road, you’ll see a small plaque, alluding to a little-known piece of social history: This modest stretch of road was home to a utopian community in the 19th century, whose backers included the abolitionist editor Horace Greeley.

Phalanx Road was not named by an urban planner with a fondness for ancient Roman military formations. Instead, it’s an acknowledgment of this unique place. From 1843 to 1856, the North American Phalanx, a community built around the ideals of the French philosopher Charles Fourier, was located in what is now Colts Neck. Fourier’s philosophy emphasized communal living and labor and at its peak, 150 people resided in this particular community. One of the backers was Greeley, an early supporter of Fourier’s ideas in the United States.

The North American Phalanx was one of the largest communities of its kind in the United States, second only to Massachusetts’s Brook Farm, which was run along Fourierist lines from 1843 until 1847.

The project was begun with gusto. Photographs of the Phalanstery, the centerpiece of the community built in 1847, reveal a building modest in design but expansive in scale. From a central entranceway runs a long two-story wing, with several chimneys arising from the roof. It was one of several buildings on the property, including a dormitory, a blacksmith shop, and a flour mill. In an article in the Spring 1974 issue of The Monmouth Historian–the journal of the Monmouth County Historical Association–the Rev. M. Joseph Mokrzycki described the components of the Phalanstery, including apartments, a musicians’ gallery, and a grand salon, a reading room, in which international newspapers and a paper produced by the Phalanx could be found.

Would-be members had to submit to a lengthy probationary period. “[P]rimary attention was placed on an individual’s ability to work with others under the theory of association,” Mokrzycki writes–“association” being Brisbane’s preferred term for Fourierism. Fourier believed (this is something of a simplification) that by bringing diverse groups of people into a system of collective living, social divisions would gradually erode, and more and more people would spontaneously adopt the Fourierist manner of living. Unfortunately, the reality of many Phalanxes did not correspond to Fourier’s ideals: several such communities were set up in the United States, but none endured.

But humans weren’t the only problem at this particular utopia. In 1854, a fire destroyed several of its buildings, with the resulting cost being the primary factor that led to its disbanding two years later. The community was already a tenuous one at that point. Founder Albert Brisbane had hoped for a population of over 1,000, a goal that was never reached, and a rival utopia–the Raritan Bay Union in nearby Perth Amboy, established in 1853–caused some members to drift away.

An interior from the North American Phalanx, prior to the fire. (Photo: Library of Congress)

A later fire destroyed what was left of the Phalanstery in 1972. Two cottages from the original property remain as private homes. A historical marker denotes the site, and, in 1998, a local Eagle Scout restored the Colts Neck cemetery that likely housed the bodies of several members of the community.

After the Phalanx left the site, a man named John Bucklin bought it and operated a cannery there. Bucklin was the maternal grandfather of Alexander Woollcott–writer, critic, contributor to the early New Yorker, and member of the Algonquin Round Table. And it was in the Phalanstery that Woollcott was born, over 30 years after the Phalanx dissolved.

This is how a failed, short-lived experiment in communal living in New Jersey made it into 20th century American literature. Woollcott’s 1934 nonfiction collection While Rome Burns contains an essay titled “Aunt Mary’s Doctor,” described as a “chapter from an as yet unwritten autobiography.” Here, he recalls the circumstances of his aunt’s death, and discusses the house in which he was born. He repeatedly cites “ghosts,” including the legacy of slavery in New Jersey, which has ties to the assembly of a building on the property; and of the rumor that several of George Washington’s troops were later buried there. And then he takes the reader to a more recent–though still many years distant–moment, bringing them back to the days of the Phalanx.

Then there is the ghost of Mr. Greeley, who used to take his nap on a chair on the veranda, the red bandanna, which would be thrown across his face, bellying rhythmically with his snores, and all the young fry compelled to go about on tiptoe because the great editor was disposed to doze.

This is not a recollection of Woollcott himself, as he was born 15 years after Greeley’s 1872 death. Instead, it’s a kind of summoning of the past, an exhumation of an intellectual legacy. Whether or not the Phalanx had a more direct influence on Woollcott’s intellectual development is less clear, though the two seemed to share a contrarian streak. Perhaps the history of his birthplace helped him to understand the virtues of a life that eluded societal convention. Or perhaps the image of Greeley in slumber was simply too good to pass up. Regardless, the legacy of the North American Phalanx can be found if you look closely enough–in archives, in memoirs, and on the side of a road.

The Forgotten Midwest Craze for Building Palaces Out of Grain

The birds fly right into your mouth, and there isn't animal poop everywhere!
cold war

It's a ghost town, but it's got a pool.
food

This niche practice was commonplace in North America for centuries.
Video