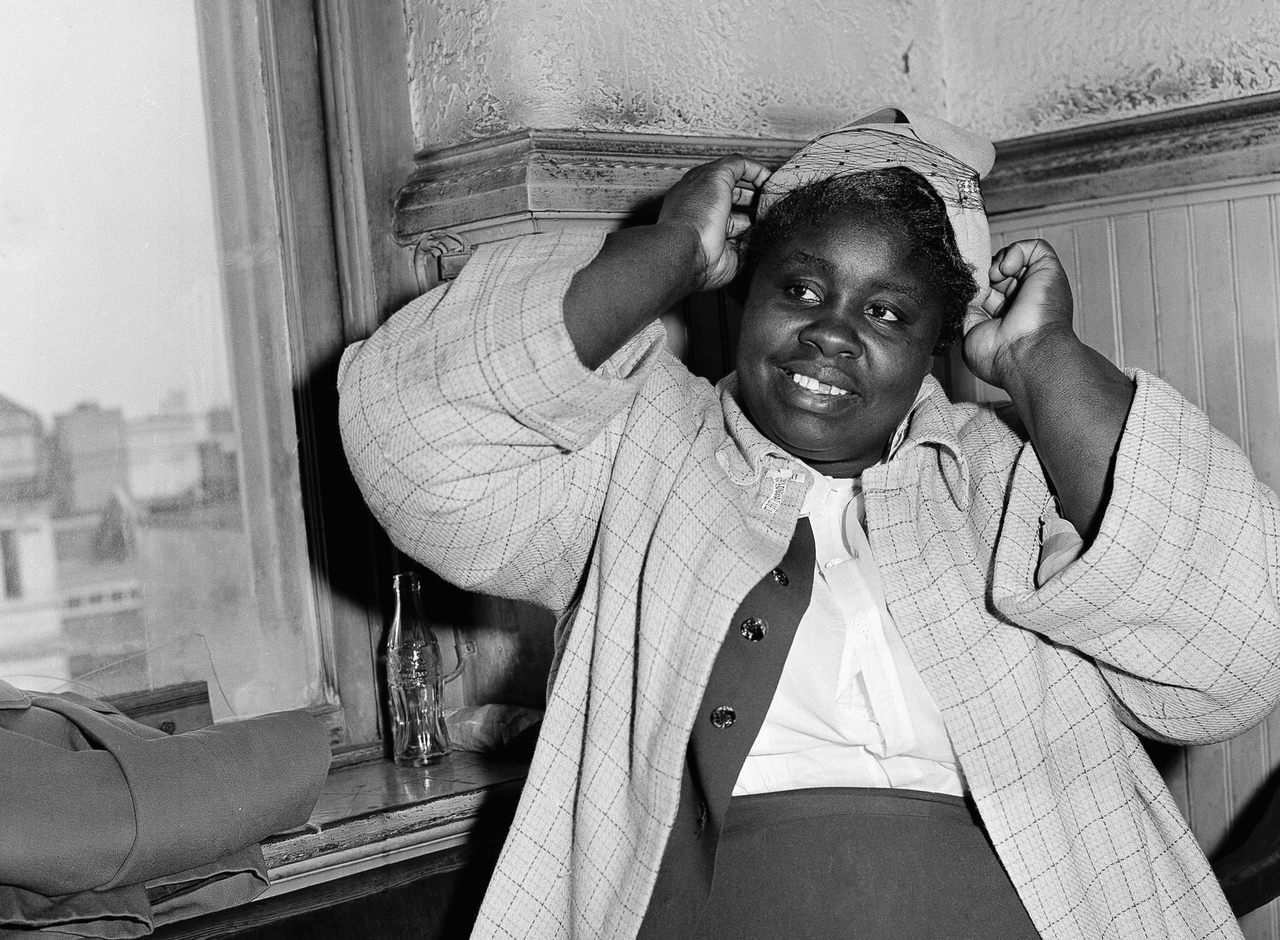 On December 5, 1955, four days after Rosa Parks was arrested for refusing to give up her seat on a segregated city bus, a community meeting was held at the Holt Street Baptist Church in Montgomery, Alabama. Thousands of Black citizens gathered to hear about the proposed bus boycott, filling every inch of the church’s sanctuary, balcony, and basement auditorium. Loudspeakers were set up to accommodate the overflow, which extended for three blocks in each direction.

“There comes a time when people get tired of being trampled over by the iron feet of oppression,” Dr. Martin Luther King Jr. called out from the podium. “There comes a time, my friends, when people get tired of being flung across the abyss of humiliation.” Dr. King’s speech—his first as a civil rights leader—electrified the crowd. The proposition to hold a bus boycott was met with thunderous applause and cheers of support.

Georgia Teresa Gilmore, a cafeteria cook, midwife, and single mother of six, was one of the thousands of people crammed into the church that night. “I never cared too much for preachers,” Gilmore later recalled, “but I listened to him preach that night. And the things he said were things I believed in.”

Gilmore was a large, gutsy woman who had little tolerance for racial bigotry. “Everybody could tell you Georgia Gilmore didn’t take no junk,” said Reverend Al Dixon. “If you pushed her too far, she’d say a few bad words, and if you pushed her any further, she would hit you.”

At the time, Gilmore was already in the midst of her own personal bus boycott. Two months before Parks’s arrest, a white bus driver had accepted Gilmore’s fare and then berated her for entering through the front door. He forced her off the bus and drove away, leaving her stranded. “I decided right then and there I wasn’t going to ride the busses anymore,” Gilmore said.

Gilmore played a pivotal role in the Montgomery bus boycott. In between parenting her six children and juggling two jobs, she single-handedly operated a grassroots fundraising campaign to support the Montgomery Improvement Association (MIA), the organization coordinating the protest. “Georgia is an unsung heroine of the Civil Rights Movement,” says Thomas E. Jordan, pastor of the Lilly Baptist Church in Montgomery. “She worked behind the scenes to support, and see the reality of, desegregation in Montgomery.”

In order to raise money for the MIA, Gilmore organized an underground network of Black women who sold pound cakes, sweet potato pies, and plates of fried fish and stewed greens door-to-door. More than half of the city’s Black female workers were employed by white families, so Gilmore’s group provided an opportunity for them to contribute without jeopardizing their jobs. “Some colored folks or Negroes could afford to stick out their necks more than others because they had independent incomes,” Gilmore told the Chicago Tribune in 1975, “but some just couldn’t afford to be called ‘ring leaders’ and have the white folks fire them.”

To protect the participants from any backlash, Gilmore named the group the Club from Nowhere. That way, if the MIA was ever asked where their money came from, they could honestly say “nowhere.” Only Gilmore knew who cooked and purchased the food.

To sustain the community’s enthusiasm, the MIA held biweekly rallies on Monday and Thursday nights. Gilmore’s fundraising updates were one of the highlights. Twice a week for over a year, the tall, voluptuous woman sauntered down the aisle singing “Shine on Me” or “I Dreamt of a City Called Heaven.” Gilmore emptied hundreds of dollars worth of coins and small bills into the collection plate and then announced how much money the club had collected that week. In response, the crowded church erupted into a jubilant din of applause, stomping feet, and a chorus of voices shouting “Amen” and “That’s right.”

The MIA organized a massive carpool network to put pressure on the city bus company. For 381 straight days, hundreds of cars, trucks, and wagons transported protestors between 42 pick-up and drop-off locations across the city. Even though all the vehicles were donated, the carpool was still expensive to run and maintain. The money Gilmore’s club raised helped pay for the gas, insurance, and repairs that kept the alternative transportation system running.

“Martin Luther King often talked about the ground crew, the unknown people who work to keep the plane in the air,” Pastor Jordan reflected in an oral history. “She was not really recognized for who she was, but had it not for been people like Georgia Gilmore, Martin Luther King Jr. wouldn’t have been who he was.” The Club from Nowhere typically raised $125 to $200 each week (the equivalent of $1,100 to $1,800 today), and Georgia Gilmore is believed to have raised more money for the boycott than any other person in Montgomery.

Gilmore’s role in the movement came at a personal cost—she lost her cafeteria job. But she rebounded quickly. Dr. King lived a couple of blocks away from Gilmore and was a fan of her fortitude and fried chicken. When Gilmore was fired, Dr. King encouraged her to open her own business. With his financial backing, Gilmore transformed her dining room into an unofficial restaurant, which served as a clubhouse for civil rights leaders.

Every morning, Gilmore woke up around 3 or 4 a.m. to prepare lunch. Her menu changed day-to-day, but always included an assortment of ham hocks, stuffed pork chops, potato salad, collard greens, candied yams, bread pudding, and black-eyed peas. By noon, her house was crowded with customers, who often waited an hour or more for their turn to order. About a dozen people could squeeze around her dining room table, so everyone else ate standing up in her living room or kitchen.

Dr. King was a regular customer at Gilmore’s house, which doubled as his office and social club. Throughout the Civil Rights Movement, Dr. King held clandestine meetings around her dining room table, fueled by fried fish and butter beans. “Her home was a haven for Dr. King and other civil rights leaders,” says Pastor Jordan. “It was a safe place to meet and discuss strategies.” Even after the white-owned restaurants were desegregated, Dr. King always headed straight to Gilmore’s place whenever he was back in town. According to Reverend Al Dixon, “Dr. Martin Luther King, he needed a place where he could go, where he could not only trust the people around him but trust the food.”

For many diners, Gilmore was as much of an attraction as her food. She had a no-nonsense attitude and a feisty sense of humor. Gilmore often greeted her guests with a “call from the kitchen,” John T. Edge writes in The Pottliker Papers: A Food History of the Modern South. In a growling voice, she’d say, “Come here you little whore and get your food! I don’t want to hear any of your mess. I got a big bowl of buttermilk and some corn bread for you to crumble in it, just like you want.”

No one was protected from Gilmore’s signature sass. In her house, Reverend Al Dixon was a “whore” and Dr. King a “heifer.” In response, Dr. King affectionately called the large woman “Tiny.”

Gilmore was also known for being a warm and welcoming host. “She was sort of seen as a mother figure,” recalls Pastor Jordan, who ate at Gilmore’s house regularly. “She had a concern and maternal care for the individuals coming in and out of her home. The atmosphere of her home allowed people to come in and relax, even if they were strangers.”

Everyone was welcome at Gilmore’s table. “Her living room and kitchen were a microcosm of what integration should look like,” explains Pastor Jordan. “It was crowded all the time with college students, government workers, military, professionals, and non-professionals.” Even Governor Wallace, the man who had previously proclaimed “segregation now, segregation tomorrow, segregation forever,” later ate at Gilmore’s. She called him “Guvs.”

Gilmore remained active in the Civil Rights Movement for the rest of her life, using her food to fuel social change. She died on March 7, 1990, the 25th anniversary of the Selma to Montgomery March. Despite being advised by her doctor to stop cooking, she woke up early to prepare chicken and potato salad for the people marching in commemoration. Instead, her family served the food to people who came to mourn her. Years later, Gilmore’s sister Betty told Edge that, “Lots of people brought food to the house, too, but everybody ate Georgia’s chicken and potato salad first. Nobody could fix it better.”

He's a towering figure in history, but his story is far from complete.
holidays

It's where legends like Tina Turner and Ray Charles launched their careers.
museums