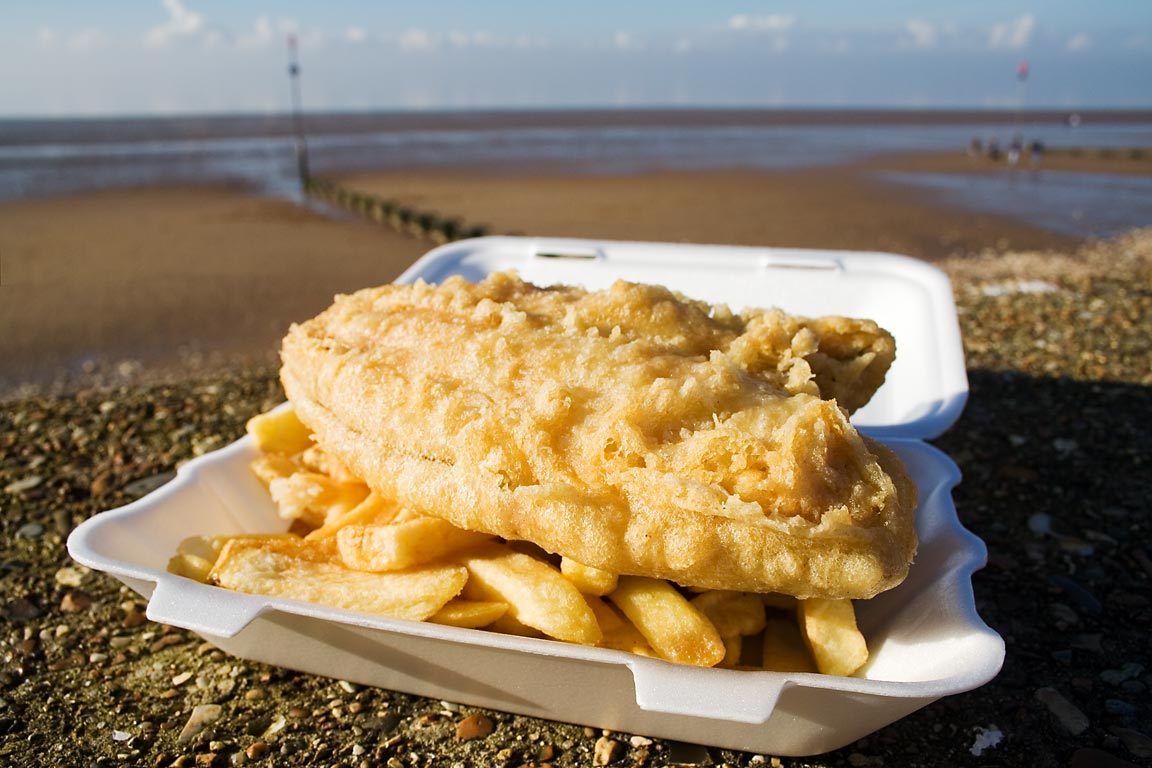 Fish and chips by the sea at Hunstanton, Norfolk. © Andrew Dunn, http://www.andrewdunnphoto.com/CC BY-SA 2.0
In This Story
Destination Guide

The powerful pairing of fish and chips has long been considered a British staple. Dubbed “the undisputed national dish of Great Britain” by the National Federation of Fish Friers, it’s been enjoyed on the island for over a century, with an estimated 35,000 chip shops in business by 1935. During World War II, Winston Churchill exempted the beloved dish from rationing. Today, “Fish & Chip Friday” is a weekly ritual for Brits ringing in the weekend.

Fish and chips’s origin story, however, is a bit more complex than this nationalist sentiment might imply.

As told by Simon Majumdar in his podcast, Eat My Globe, it all began outside of the U.K., hundreds of years ago. From the 8th to the 12th century, Jews, Muslims, and Christians lived in relative peace in Portugal, known as Al-Andalus under Moorish rule. Sephardic Jews, who likely comprised around 20 percent of the population, were relatively well-respected and held positions in the high court. For this reason, the area became somewhat of a haven for those fleeing the Spanish Inquisition. However, in 1496, after the end of Moorish rule, King Manuel I married Isabel of Spain, who was not so aligned with the idea of religious freedom. Her ultimatum: Their betrothal would mean the expulsion of Jews from Portugal. Manuel I mandated that all Jews be baptized, or otherwise expelled.

While many fled, some Jews stayed, and either converted to Christianity or pretended to do so while continuing to practice Judaism in secret. But when Portugal fell under Spanish rule, the Inquisition targeted individuals with Jewish lineage, threatening anyone claiming to be a Converso. As religious violence worsened, many fled Portugal and resettled in England, bringing with them culinary treasures founded in Sephardic cuisine—including fish.

Peshkado frito (in Andalusian dialect, pescaíto frito) was one of them. The dish of white fish, typically cod or haddock, fried in a thin coat of flour, was a favorite particularly among Sephardic Jews, who fried it on Fridays to prepare for the Sabbath, as the Mosaic laws prohibited cooking.* Allegedly, the batter preserved the fish so it could be eaten cold, and without sacrificing too much flavor, the following day.

It was a hit. Fish prepared “in the Jewish manner” was sold on the streets of London on any given day. And at the end of the week, eating fish on Friday was a part of religious observance for Jews and Catholics alike—as “fish fasting” to avoid consuming warm-blooded animals has been a part of the Catholic tradition for centuries.* Though both groups were religious minorities at the time, fried fish became a popular secular dish, too.

But the Friday-night tradition was likely chipless until the late-19th century. The general popularity of the potato bloomed late in Europe, and it wasn’t until the late 1800s that the tuber was accepted, due especially to the promotional efforts of a French scientist. Though there are several theories of how the potato came to England—and how it became the “chip” we know and love today—one historical account credits a tripe vendor by the name of Mrs. “Granny” Duce with selling the first fried cut potatoes to the public.

There are also competing theories about who created the pairing of, as Churchill called them, “good companions.” Most trace it back to the early 1860s, when Joseph Malins, a Jewish immigrant, opened up a fish and chips shop in London. Others point to John Lee, a man living outside of Manchester, who ran a “chipped potato” restaurant that sold the beloved pairing.

Whether the winning combo was first slapped together by John or Joseph or someone else entirely, it soon became everybody’s dish. British natives and immigrants alike began slathering their cod in batter and frying up husky chips. Industrialization in the 19th and early 20th centuries launched the fish dish to even greater heights, as it became a favorite for factory and mill workers in London and beyond. And while its religious connotations are hidden today, many admirers remain devoted to the beloved international, national dish.

*Update 10/23: This post has been updated to note that Catholics were a minority in England during the time period in question.

**Update 10/23: This post has been updated to remove the term “Marranos,” which is often considered offensive.

***Correction: This post previously stated that Sephardic Jews fried fish on Friday nights before the Sabbath. Sabbath begins at sunset on Fridays.

The Places You Never Tire of Visiting

During a drought, church-builders mixed their mortar with the local vintage.
food

In Indiana, a restaurant and grocery store offers refugees a taste of home.
churches

Why a Minnesota Pastor Wrote an Obituary for a Lutefisk Dinner