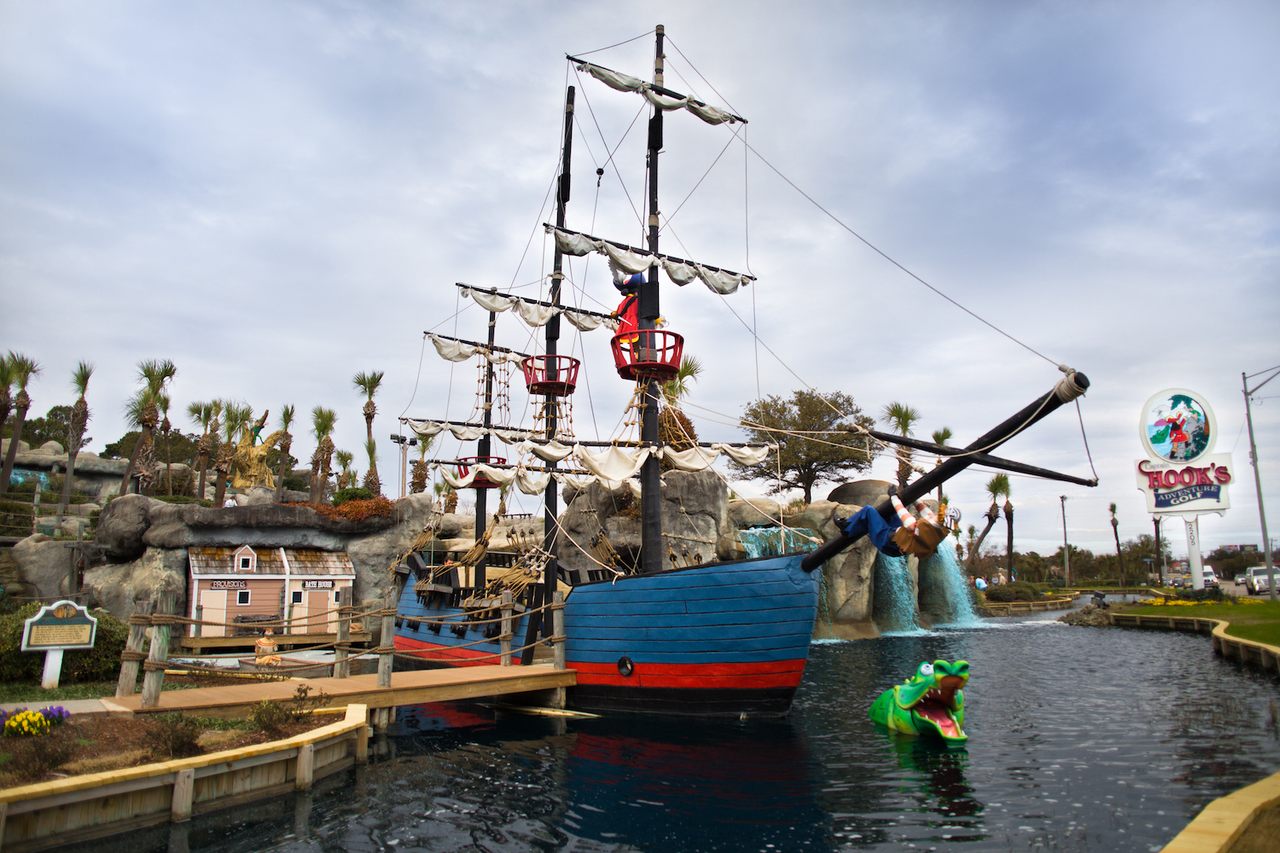 In Myrtle Beach, South Carolina, you can check yourself into a campsite or RV resort with its own mini-golf course. You can drive for an hour along “the Grand Strand” on the state-long Highway 17 and hit a mini-golf course every few minutes. You can choose between 50 courses within the span of 30 miles.

Myrtle Beach may be the golf capital of the world, but it’s also the self-proclaimed mini-golf capital of the world. Not only are there more mini-golf courses per square mile than in any other city in the United States, but Myrtle Beach is also home turf for the ProMiniGolf Association’s annual “Master’s” tournament. For the past 20 years, the association’s president has even been working on getting the sport into the Olympics. Those are big dreams for a game that was initially considered “fake golf,” a diminutive version of “real golf” that was more attraction than sport.

Not many people visit Myrtle Beach solely for a mini-golf weekend as they do in heaps for regular golf, though they might consider it. There are storylines to follow, worlds to travel through, heights to ascend, and Easter eggs to surprise along the way.

One of the first mini-golf courses came to Myrtle Beach on Highway 17 in the heart of the city, adjacent to the first hotel and the amusement pavilion, in June 1930. It wasn’t alone—it was around this time when courses were opening across the U.S. The sudden spark was thanks to Garnet Carter, who owned a golf course and inn at Fairyland, his property near Chattanooga, Tennessee.

In 1926, Carter and his wife Frieda built a mini-golf course to keep wives and children entertained while men were off on his larger course. However, this wasn’t just a miniature version of regular golf, as others had been up to that point: There were hollowed-out logs, rock tunnels, fairy statues, and obstacles. In the end, it was more profitable than his other offering. After he patented and franchised “Tom Thumb Golf” in 1927, named after the English folk character, thousands of similar attractions popped up across the country.

But as with all leisure activities popular with Americans in the 1920s—mahjong, flagpole sitting—the Great Depression squashed mini-golf into a short-run fad. While pockets of Tom Thumbs and mom-and-pop courses could be found where space was cheap, in Myrtle Beach, real estate developers saw mini-golf as an important part of their grand, long-term plan.

Before the turn of the century, the development company Burroughs and Collins envisioned building a main street that would turn the sleepy fishing village into a “vacation playground” to rival Coney Island in New York or Atlantic City in New Jersey. It’d be close to the beach and full of reasonably priced attractions. In 1900, the company built the first railroad that connected Myrtle Beach to western and northern parts of the Carolinas.

Then, in 1926, the mogul John T. Woodside from Greenville, North Carolina, invested his millions to pave Highway 17, which was chosen as the burgeoning town’s main street. He also built Myrtle Beach’s first golf course.

Word of this vacationland spread swiftly—thanks in large part to the efforts and investments of the same developers. A 1935 promotional magazine called Myrtle Beach, Today and Tomorrow touted the town as “one of those ‘unique’ resorts where there is always something to do; someplace to go; something different to see other than the usual beach activities.” Mini-golf was one of those hyped attractions.

For businessmen, it also glimmered of a great idea to get rich quick. Mini-golf courses could be built and maintained at a fraction of the cost of regular courses (you don’t need as much land or labor, and you don’t have greens to water and mow), and with the town in development, there were plenty of people in Myrtle Beach who could build one for you.

While the West Coast had elaborate courses influenced by Hollywood, the East Coast courses of the late 1940s and early 1950s were smaller and more straightforward because of their shorter playing season and climate. They were still prominent, though: A number of “carpet golf” courses, which were fairly flat and with few decorations, were built in Myrtle Beach’s oceanfront amusement pavilion, where “everything that is Myrtle Beach…all started,” according to Will Moredock in the book Banana Republic Revisited.

But because the town had tourists pouring in and a longer vacation season than most places along the East Coast, course owners grew to have the revenue and reason to invest in flashy special effects. Take one of those oceanside carpet golf courses: Before it was torn down in the 1980s to make way for a shopping complex, the fairly standard course was remodeled with a global theme by the developers who brought some of the first jungle-themed courses to the area. Not only did Around the World in 18 Holes stand out because every few holes represented a different part of the world, but some holes, such as the one for Tibet, were elevated.

By the 1970s, a local style had been established that could be found in Myrtle Beach and south along the Eastern Seaboard. Nina Garfinkel and Maria Reidelbach describe “Myrtle Beach Style” in the book Miniature Golf as “characterized by large central rockeries made of sprayed synthetic rock over which water, dyed blue or gold, cascades dramatically… Invariably a jungle atmosphere is invoked, replete with palm trees, thatched huts, and fiberglass ‘wild animals.’”*

With so many courses densely packed into a small area, businesses have to stay competitive to stay in business. And in Myrtle Beach, staying competitive means building the largest, most imaginative, most over-the-top putting greens.

Take Mount Atlanticus Mini Golf, just a block north of the location of that bygone first mini-golf course, which likely closed to make way for the expanding amusement pavilion. Its sun-bleached sign reads Mount Atlanticus Minotaur Goff (as the story goes, the course was built 50,000 years ago by a minotaur named Goff) and juts in front of towering huts, an ocean-blue waterfall, and an oasis of palm trees.

The mini-golf course was built in 1999 for a reported whopping $3 million in what was previously the Chapin Company department store. Some holes are four stories up, and the last hole—down a long, impossibly narrow green surrounded by water—is so hard that if you ace it, you get a lifetime pass.

Mini-golfers start their game indoors, where they’re greeted by a rendering of Michelangelo’s The Creation of Adam, in which God, with his hair coiffed and shirt unbuttoned, quite resembles George Michael. They then wade through the lagoon, which has sea monsters, lily pads, giant Venus flytraps, and real koi fish. After the lagoon and the ice cave, there’s the land of tiki: holes on elevated huts with raffia rustling in the wind, lily pad obstacles, even a view of the ocean.

The snazzy special effect at Hawaiian Rumble, a course 12 miles down the Grand Strand, is a 40-foot volcano that shoots fire every 20 minutes. Even so, its owner, Bob Detwiler, president of the ProMiniGolf Association, says he’s constantly upgrading. All of his courses have exotic tropical birds (he rescues and rehabilitates them) and turtles (he raises and sells them). Every spring, he brings in two semi-loads of hibiscus. Other courses have employed boats, airplanes, plot lines, indoor courses, and booze.

One of Detwiler’s newer courses, Aloha, also has a shooting volcano, but this particular location’s main allure isn’t all eye candy. Detwiler, who designed the course himself, incorporated elements of professional golf courses, a budding trend he’s finding as mini-golf is taken more seriously. For Aloha, this meant sloping greens, rock barriers made of concrete, and carpet “that’s as close as you can get to grass.”

“You have to keep up,” he cautions.

Meanwhile, Captain Hook’s Adventure Golf lures you from the street: Mermaids wave at passersby, and a human skull has smoke coming out of its eye sockets. Once you start to play, the voices of Peter Pan and Captain Hook egg you along over the speakers. During the run of your game, you’ll journey under waterfalls and through caverns (Tinkerbell’s locked up in one), hike up a mountain to hang out with the Lost Boys (Peter Pan’s sitting in a tree), and even play one hole on Captain Hook’s ship. The course is often packed, even in the off season.

Even with Myrtle Beach’s plentiful other attractions, mini-golf remains popular for tourists and businesses alike. Detwiler claims mini-golf in Myrtle Beach is a $25-million-a-year industry, and the annual US ProMiniGolf Association Master’s tournament—“the Augusta National of mini-golf”—alone brings in one or two million dollars annually.

The success of the game in Myrtle Beach isn’t frivolous or a fluke—those developers’ plan from the 1920s has worked: Burroughs and Collins is now Burroughs and Chapin, which owns a huge amount of land in Myrtle Beach (including many mini-golf courses). They continue to create family-friendly attractions that pull in tourists of all ages. For two years in a row, a record number of visitors have flown to the area.

But mini-golf hasn’t thrived just because it’s a smart business move—it also brings wholesome escape to an otherwise slightly seedy, Ferris-wheelin’ beach town. According to a 2015 economic impact study, more people visit a mini-golf course in Myrtle Beach than amusement parks. Anyone—whether sunburnt, exhausted, terrible at golf, tight on cash, or stuck with Grandma—can play a round or 50 on constantly-improving courses. They can journey to Mt. Atlanticus, Neverland, Hawaiian paradise, or almost any other fantasy they can dream up, all along one stretch of highway in South Carolina.

*Correction: This piece originally stated that this quoted description belonged to John Margolies. While Margolies was responsible for the images in Miniature Golf, Nina Garfinkel and Maria Reidelbach wrote the text.

A Digital Look at Darwin’s Trove of Prehistoric Fossils

The organizers posit that "derelict heritage" can be a path to rejuvenation.
floods

As waters rise in Morganza, Louisiana, so does disaster tourism.
architecture

Creating Disneyland Was Like Building a Brand New City

Mill Ends Park in Portland, Oregon, now has its own sign.
Video