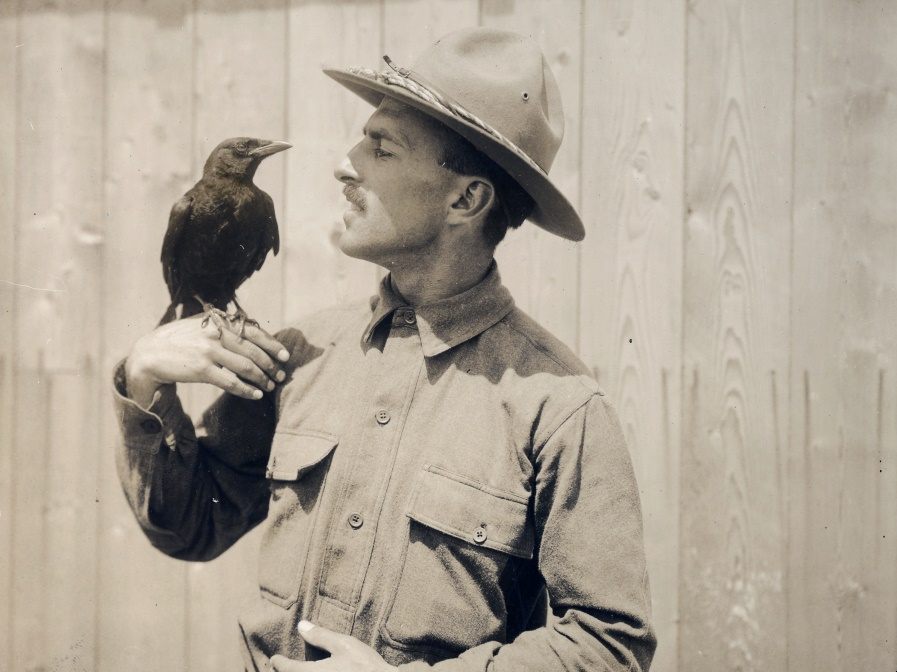 During the First World War, a menagerie of animals became honorary soldiers in the American army. Whether for the sake of comfort, combat, or ceremonial pride, different World War I U.S. military regiments adopted animals into their ranks—from several species of canine to the more unusual raccoon and baby alligator.

Recent photos digitized by the National Archives reveal the range of animal mascots employed during World War I and the relationships soldiers had with these creatures.

The battlefields of World War I were torn up and destroyed by new machine-based warfare. Tanks, airplanes, machine guns, and mustard gas transformed the trenches of the Western Front into a wasteland. Amid these trying conditions, animals were a source of consolation and familiarity.

“The very presence of animals was a key link with ordinary pre-war life for the soldiers of 1914 to 1918,” wrote Tim Cook in Canada’s History.

Dogs, cats, foxes, and even lion cubs provided soldiers comfort and kinship as pets and boosted morale as mascots.

But they weren’t just there to be friendly and encouraging—they performed military duties, too. Units of both the Allies and Central Powers used tens of thousands of homing pigeons to relay messages due to their agility and ability to fly high above trenches, including Cher Ami the pigeon that saved 194 soldiers with the message he delivered at the expense of his life. Dogs were intelligent sentries and rescuers. They helped lay telephone wires, while one Boston Bull Terrier, Sergeant Stubby, was even able to sniff out and alert soldiers of the presence of mustard gas. Some dogs trained to parachute behind enemy lines.

Unfortunately, these animal soldiers and mascots were also casualties of war. The German military brought down carrier pigeons with hawks and falcons, as well as machine gun fire. An estimated nearly eight million horses that moved supplies and soldiers died during the four years of World War I, according to The Atlantic. Many were slaughtered to serve as food and, gruesomely, mattresses, wrote Steven Johnston in Political Research Quarterly.

The horrid deaths and living conditions appalled military officials from multiple nations, some of whom made strides to protect and improve the care for animals used in warfare. Canadian veterinary officer Major D.S. Tamblyn created a service dispatching veterinary sergeants on patrols to care for abandoned horses, wrote Cook.

“I deem this step necessary as a number of cases have been brought to my notice of animals being left to die on the roadside,” Tamblyn once wrote. “I trust this will eliminate such cruelty.”

In June 27, 1916, the American Red Star Animal Relief organization was founded by the American Humane Association as a kind of Red Cross for U.S. Army animals, according to The National Museum of American History. The organization sought to help the health of animals by recruiting veterinarians, blacksmiths, and stable hands, and published educational pamphlets that gave guidance on first aid for horses. Similarly, the British government recognized the value of messenger pigeons and created the British Defence of the Realm Act, which declared it a crime to kill, wound, molest, or not take adequate care of pigeons.

Military mascots were rewarded and memorialized for their service. Many mascots received official military personnel files like soldiers, giving them authenticity. Others, like Cher Ami the pigeon and tough canine Sergeant Stubby, have been stuffed and preserved as war heroes at the National Museum of American History in Washington, D.C.

Stuck in an 8-hour gridlock, the Tacos El Tajin truck made the best of a bad situation.
world war ivisualmilitary historywar historymilitaryanimals

Strange and unexpected photos of wartime innovation, animal mascots, and Churchill in a onesie.
military history

The Artists Who Depicted War in a Whole New Way

These unorthodox images were used to drum up support for World War I.
world's largest