A Day at Yakapalooza, the Premier Event for the Yak-Curious - Gastro Obscura
Want to see fewer ads? Become a Member. 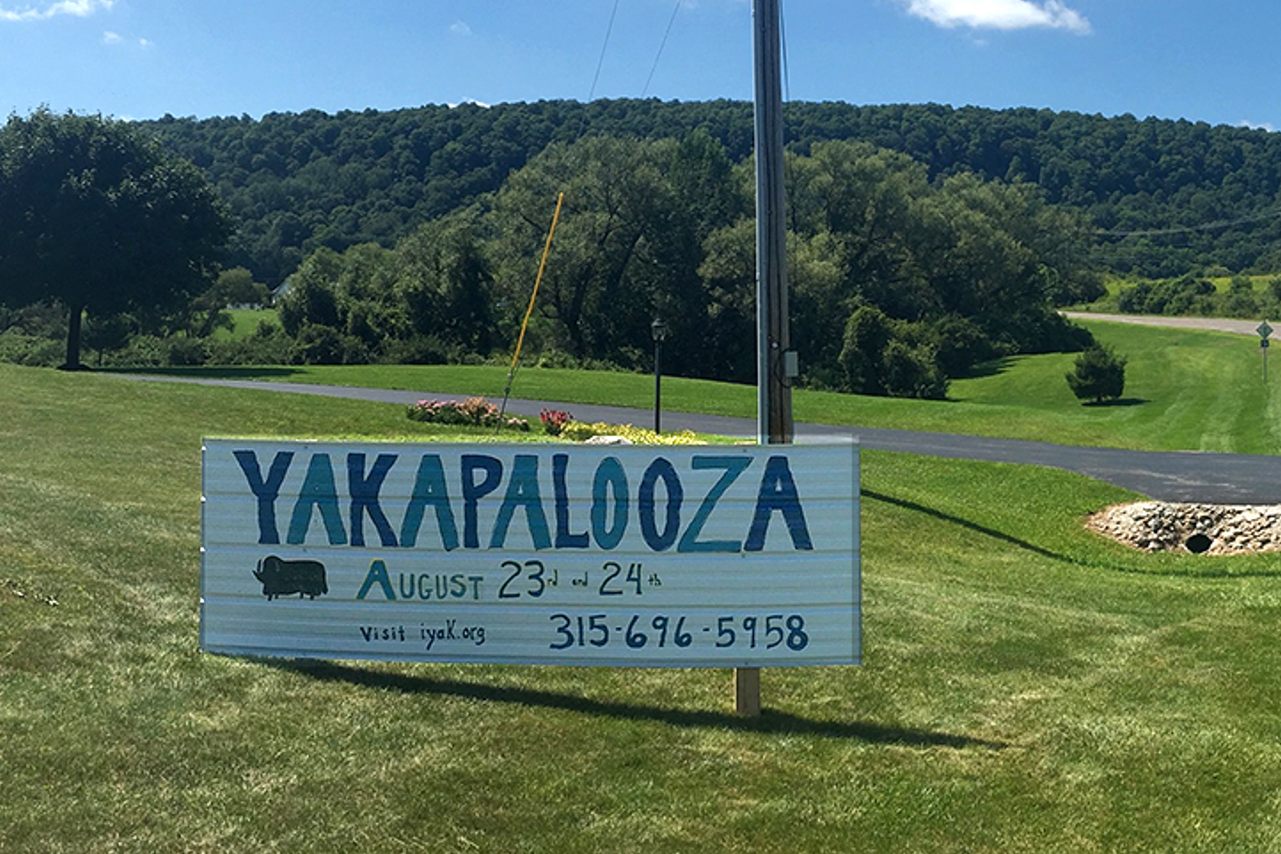 A sign on the road features the Yakapalooza event dates. Oliver Whang
In This Story
Destination Guide

Lynette Priest, a yak owner from Mancelona, Michigan, is sizing up potential customers in the parking lot of a farm in Tully, New York.

Standing in front of a large wooden barn nearby, Jane and Jon Marbet look lost. The Plymouth, Massachusetts, couple recently started thinking about putting a small farm on their empty plot of land in Maine. Today they drove here to Tully, a town of green rolling hills, to look for an animal or two to put on that farm. Something endearing and large and, better yet, tasty—preferably with a low fat content.

“First we wanted buffalo,” Jane says, “until we went to a buffalo farm—”

“—and they just want to kill you,” finishes her husband.

The couple’s dreams of fresh lean meat to stock and sell were put on hold. But then they heard about yaks.

A couple million years ago, in the wide strip of land running from the Himalayas of South Asia to the Tibetan Plateau, modern-day wild yaks (Bos mutus) first appeared. They were significantly smaller and hairier than their ancestors, the aurochs, who are also common ancestors to European and North American cattle. The domestic yak (Bos grunniens), bred by occupants of South Asia between 7,000 and 10,000 years ago, has large lungs and thick, long fur necessary for survival in high altitudes and frigid temperatures. Today the animals speckle slopes and divots of mountains across Central and East Asia, impassive dark spots against snowy peaks.

Yaks form a key part of modern rural life in these regions, used to lug supplies and people up to extreme heights. In Tibet, Nepal, and India, all parts of the animal are used—fur for clothes, milk for cheese and drink, meat for food, horns for combs, tail for broom brushes, skin for cloth, and dung for fuel.

In the United States, yak is mainly advertised as an alternative to beef, but better in every way: more environmentally sustainable, tastier, healthier. Jon and Jane Marbet first stumbled across the meat for sale online a couple of years back and were instantly hooked. The animals also, according to the couple, do not want to kill you. Which is why they are here now, standing in front of a large wooden barn in Tully, New York, ready to buy some yaks.

The barn in question is on a farm called Bentwood Alpacas and Yaks, owned by Suzanne and Mark Drumm. Inside are 20 alpacas that chase each other around on stubby legs, tilting their long necks at precarious angles, screaming. Outside the barn, standing with heads bowed on gentle slopes of grass, are the yaks. Some are a solid dark brown or black, others are patched with white. The Drumms own around 40 yaks, but today there are an additional dozen or so on their land.

The yaks present at Yakapalooza outnumber humans three-to-one. Inside another large barn are two tents set up by attending yak owners, most of whom are members of IYAK, the International Yak Association. Despite its name, IYAK consists only of farmers living in the United States. As yak popularity in the U.S. skyrocketed in recent years, mainly due to the animal’s lean cuts of meat, the organization, and the zeal of its members, has grown significantly.

The President of IYAK, Stephanie David, owns Bow Creek Ranch in Kansas with her husband, Doug. Doug David stands beneath his tent with five plates of yak jerky laid out in front of him. People periodically filter by, slapping him on the shoulder and spearing samples with wooden toothpicks. The packets of meat are around $12—pricey for a bag of jerky—but people keep swinging by, grabbing bags of the stuff in one hand while holding out folded bills in the other.

Doug grew up in Western Kansas on a cattle farm, and in the late 1990s was one of the first people to venture into the world of North American yak farming. Back then, Doug estimates, there were only 600 yaks in the entire continent. Now there are more than 20,000. He remembers trying the meat for the first time at the Denver Stock Show and being impressed enough to buy a couple of animals on the spot. “I just wanted to try something different,” he says, shrugging.

Now, Doug and Stephanie own one of the largest yak herds in North America—more than two hundred animals. “I can hardly keep enough,” Doug says. “The meat market has exploded.”

But the market is still tiny compared to that of other standard farm animals. There are nearly 100 million cattle in the U.S., and a cut of grass-fed beef is usually about half as expensive as a similar cut of yak meat. This is mainly because the USDA still considers yaks “exotic” animals, requiring inspection of the meat from “hoof to packaging,” each hour costing the farm owner upwards of $85. IYAK is working to get the animals delisted, but has had no success yet.

The environment in Western Kansas, and most parts of the U.S., is also significantly warmer and wetter than that of Tibet and Nepal. Maintaining a herd in these conditions is expensive. Doug has to move most of his animals all the way to Colorado when the weather starts getting too hot on his ranch in Lenora, Kansas.

For many, yak farming has become more of a hobby than a money-making scheme. Ron Ireland, who owns a farm with his wife in northern New Jersey, is a fairly serious yak owner but still ends up in the red every year. “We’ve been at it 15 years and haven’t made any money,” he tells me, though this fact doesn’t seem to upset him too much—he says so while winking and smiling.

Yakapalooza is thrown by IYAK for yak farmers all over the country. In attendance are local farmers, including Szabolcs Mandy, a Hungarian immigrant who lives in Tully and works as a pediatric anesthesiologist on the weekdays, and farmers who drove for days to be here: Holly Modjeski, the treasurer of IYAK, is on the last stop of a 3,500-mile yak transportation trip from Colorado to Montana to Kansas to New York. The event offers an opportunity for these farmers to get together, bond over their yaks, and maybe even get some business. Most of the people here are already close acquaintances, and fresh faces, though few in number, are sized up as potential customers.

But a yak is a serious investment. The animal itself can cost anywhere between $1,000 and $10,000, without taking into account equipment and upkeep. By the end of the day—after a yak photo competition and a yak chute demonstration and a yak fiber judging—as the sun sinks below the trees of Bentwood Farms, very few yaks have been sold. The number could be counted on one hand.

But this doesn’t seem to bother the 20 or so people inside the Drumm’s large barn. Each person appears content with this little gathering, particularly Jane and Jon Marbet, who are proud new owners of three yaks.

In 19th-Century Britain, The Hottest Status Symbol Was a Painting of Your Cow

The inventor of the Coney Island hot dog rests in a grand mausoleum in Brooklyn.
Want to see fewer ads? Become a Member.
From Around the Web
THE GASTRO OBSCURA BOOK
Taste the World!
An eye-opening journey through the history, culture, and places of the culinary world. Order Now