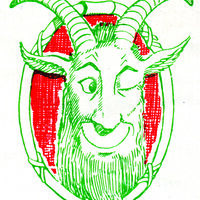 John Goldsmith has been the curator for the DeMoulin Museum since its opening in 2010. Goldsmith’s interest in the company’s history was encouraged by his mother, Norma, who worked at the factory for 50 years until her death in 2007. He self-published in 2004 “Three Frenchmen and a Goat: The DeMoulin Bros. Story.” Now out of print, the book was sold in the United States, Canada, and Europe. Inspired by his mother’s passion to preserve DeMoulin Bros. & Co. history, Goldsmith spearheaded the creation of the DeMoulin Museum. It has attracted nearly 5,000 visitors from over 35 states. The museum showcases everything from fraternal regalia and marching band uniforms to lodge and church furniture. But the main draw is the quirky lodge initiation devices manufactured by DeMoulin from 1895 to 1930. The museum features many of these wacky gadgets including the ferris wheel goat, trick chair, the lung tester, and various spanking devices. John Goldsmith was a consultant on “Catalog 439: Burlesque Paraphernalia” published by Fantagraphics in 2010 and “The Extraordinary Catalog of Peculiar Inventions” published by Perigee in 2011. The DeMoulin Museum has been featured on KSDK’s Show Me St. Louis; WSEC’s Illinois Stories; WEIU’s Heartland Highways; and WTVP’s Illinois Adventure. Goldsmith also served as a consultant to the History Channel’s American Restoration in 2014 when they restored two DeMoulin lodge initiation devices owned by David Copperfield. Goldsmith is also friends with Mike Zohn from Science Channel’s Oddities.
www.demoulinmuseum.org