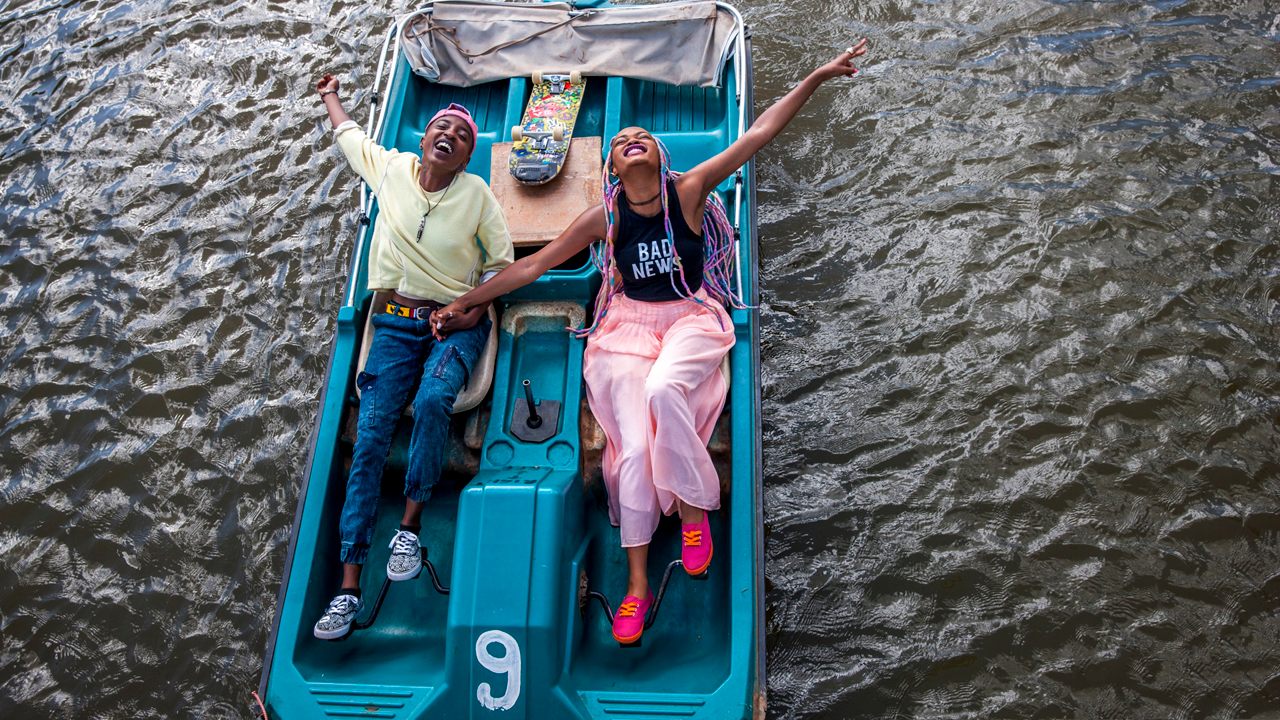 According to Nairobi-based director, producer, and author Wanuri Kahiu, African art needed a jolt of fun, fierceness, and frivolity. Too often, she says, the stories that come out of the continent are “limited to war, poverty, and devastation.” So Kahui cofounded an artistic movement called AFROBUBBLEGUM that flies in the face of those stereotypes. AFROBUBBLEGUM includes the work of many artists in a variety of mediums, including Kahui’s film Rafiki, which follows the story of Kena and Ziki, two women in Kenya who fall in love despite the political rivalry between their families and the conservative society in which they live.

Host of the TED podcast Pindrop, Saleem Reshamwala, spoke with Kahui about the movement, and how Africa and Africans are portrayed around the world. This interview has been edited for clarity and length.

AFROBUBBLEGUM is fun, fierce, and frivolous African art. It’s art for art’s sake. It’s art for the sake of joy. I felt that we were missing out on being joyous and allowing ourselves to be joyous because so often, especially when you decide to become an artist from this side of the world, instead of being something more serious, like a doctor or lawyer or whatever your family expects of you. Our stories are never about joy. And if we don’t see ourselves as people of joy, how do we know we’re worthy? If seeing is believing and we don’t see ourselves as joyful people, how do we know that joy is something that we can work toward, or we can attain, or something that belongs to us? So I started to look for joy in our art and saw that it had always existed. We’ve always been a people of joy and we should celebrate that.

How did the movement start?

It came about as a result of a conversation with other artists, including Muthoni Drummer Queen and Blinky Bill. We started talking about, “Why don’t we have the right to be like pop and bubblegum?” Like, you know, AFROBUBBLEGUM.

I saw you made almost like a Bechdel Test of the specific rules. What are those rules?

It has three questions. In your piece of art, are two or more Africans sick or dying? Are they hopeless or lost? Are they in need of saving? And if the answer is yes, then your work is not AFROBUBBLEGUM.

Getting your art out into the world hasn’t always been easy. Can you tell us about the pushback around the release of your film Rafiki?

Once the film was released, it was banned in Kenya, which means it couldn’t be broadcast, couldn’t be distributed, couldn’t be exhibited, and couldn’t be possessed within the Republic of Kenya. I know we shouldn’t have been surprised, but we were still incredibly disappointed because not only do we love our country, truly love our country, but we also believe in the mandate that was set out, which is our constitution. And our constitution allows us freedom of expression. The classification board wanted me to change the ending because they felt it was too hopeful, and they thought it should be remorseful. When I refused, they banned it. They said that by keeping the ending—which is joyful, which is in keeping with my ethos on AFROBUBBLEGUM—that it normalized and glorified homosexual behavior.

Do you see the AFROBUBBLEGUM movement as political?

I think when you’re creating, you’re not thinking about the reception, you’re thinking about the creation first. When I say that it’s not a political story, I think this is what I mean. Love has become associated with politics. Depending on who you love and what color you are and what religion you are. So a white, straight couple, you wouldn’t call that love political. But if you change the hue of the color of the person, if you change the race, the ethnicity, the religion of the person, then it starts being called political. So when you have two black women loving each other, it’s as if what they’re doing is an act of politics, not an act of love.

What do you hope will come from this movement?

I’d love to project more hopeful, radical hope, ideas that are full of awakened curiosity that help us think in new ways, that help us value Africa in new ways. I really, truly think that once we begin to see Africa in a new light, it will help globally with many, many injustices that we still face.

To hear more from Kahiu and other artists in the movement, listen to Far Flung with Saleem Reshamwala (formally called Pindrop), a podcast produced by TED that travels around the world in search of surprising and imaginative ideas. You can find it on Apple Podcasts, Spotify, or wherever you listen to podcasts.

The 'Boccaccio Project' Is Capturing the Music of Quarantine

You can’t not dance when amapiano comes on.
art

The Artist Who Imagined Zaire as a Miniature Utopia

A Fossilized Skull May Solve the Mystery of a Chameleon Migration

A raft very likely carried chameleons between Madagascar and mainland Africa—but in which direction?
Video