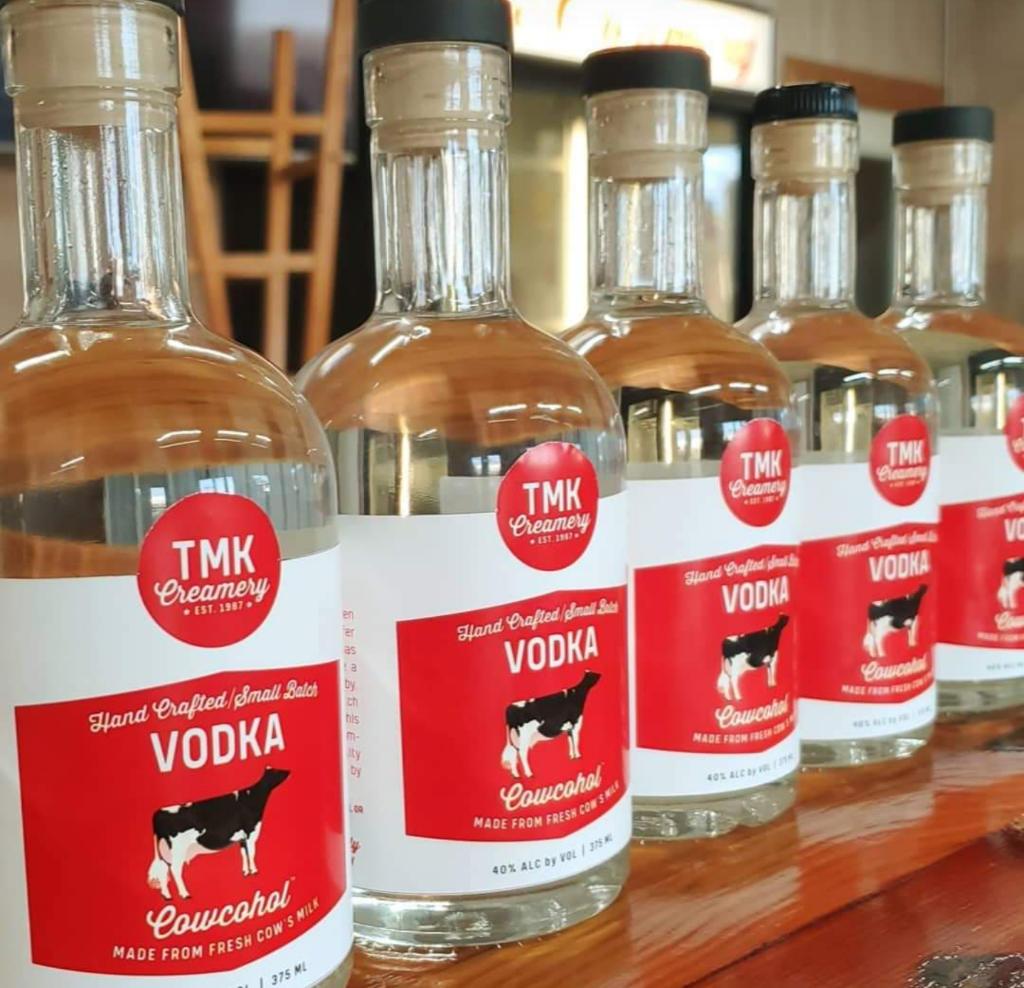 Just when you thought cows could do it all. Courtesy of TMK Creamery
In This Story
Place

As long as humans have enjoyed the bacterial miracle that is cheese, cheesemakers have struggled to make use of its byproduct: whey. Every pound of cheese produces about nine pounds of whey—the translucent liquid you may recognize from the top of a freshly opened tub of sour cream. Excess whey can fertilize fields or feed pigs, but artisanal creameries are often still hampered by massive amounts of leftover whey. They pay thousands of dollars to have it disposed of in landfills.

Luckily, a niche field of researchers and an eager group of craft creameries are taking an unexpected approach: turning all that whey into “vodka.”

Dr. Paul Hughes is an Assistant Professor of Distilled Spirits at Oregon State University, a nascent department and one of the few of its kind in the country. After an aspiring graduate student approached him about fermenting whey into a neutral spirits base, he began running experiments to prove that the solution was both environmentally sustainable and cost-effective for small creameries. His work showed that a cheesemaker selling cheese for $40 a pound could, with a proper fermentation system, make half again as much in retail sales on alcohol. In the last several years, he says, he’s been approached by more than a dozen creameries from across the country looking to ferment their whey into alcohol.

Todd Koch, owner of TMK Creamery in the rolling hills of Oregon’s Willamette Valley, remembers reading about Hughes’s work in the newspaper early last year. Large, corporate-owned creameries can afford the expensive equipment that converts whey into profitable products such as protein powder. But at his family-owned, 20-cow farmstand creamery, Koch and his wife simply fed their whey into the fields through a nutrient management system. Rather than continue to bury the byproduct, Koch decided to ferment as a means of profitably upcycling the whey while bringing visibility to his animals. He teamed up with Dr. Hughes and a nearby distiller to manufacture the creamery’s newest product: a clear, vodka-like liquor they call “Cowcohol.”

Not only is it an effective means of upcycling, but it also “creates another vehicle to showcase our true heroes, the cows,” says Koch. “We call them cow-lebrities.”

Koch says the cow-based spirit has a caramel-like sweetness with a smooth finish. Dr. Hughes, who has officiated the American Craft Spirits competition, says it’s refreshingly neutral. He would have no problem serving it neat to a friend, though he admits his peripheral involvement renders him biased. Judging from public demand, the partnership produced a hit: TMK is overwhelmed by demand for “Cowcohol.”

Outlandish as it may seem, TMK is not alone at the intersection of dairy and liquor. A sixth-generation dairy farmer from Dorset, England, turns his whey into Black Cow Vodka. Tasmania’s Hartshorn Distillery ferments their sheeps’ whey into award-winning vodka, gin, and liqueur. Ontario’s Dairy Distillery turns problems into profit with a product they call “Vodkow.” Indeed, Dr. Hughes imagines a future in which a concentration of creameries are bound by a cooperative distillery fermenting what would otherwise be a cumbersome byproduct.

Whey fermentation offers a brave, new world for small creameries, both in decreasing their environmental footprint and ensuring financial security in an age of mass conglomeration. For Koch, a life-long, self-proclaimed “cow person,” the possibilities of bovine booze are a relief to him and his beloved herd. “Going through college, I was like ‘Man, if I could just figure out how to get cows to make alcohol, we’d be set,’” he says. “So I guess we’re one step closer here.”

The Small Goat Breed That’s a Star of Urban Farms

“If you’re thinking about getting a dog, maybe get a goat instead.”
insects

Every summer and fall, giant vacuums gobble up insects for 13 hours a day.
Video • Wonder From Home

Eat like a "buckaroo" at this remote restaurant.
Portland, Oregon

Definitely not a clown bar.
Want to see fewer ads? Become a Member.
From Around the Web
THE GASTRO OBSCURA BOOK
Taste the World!
An eye-opening journey through the history, culture, and places of the culinary world. Order Now