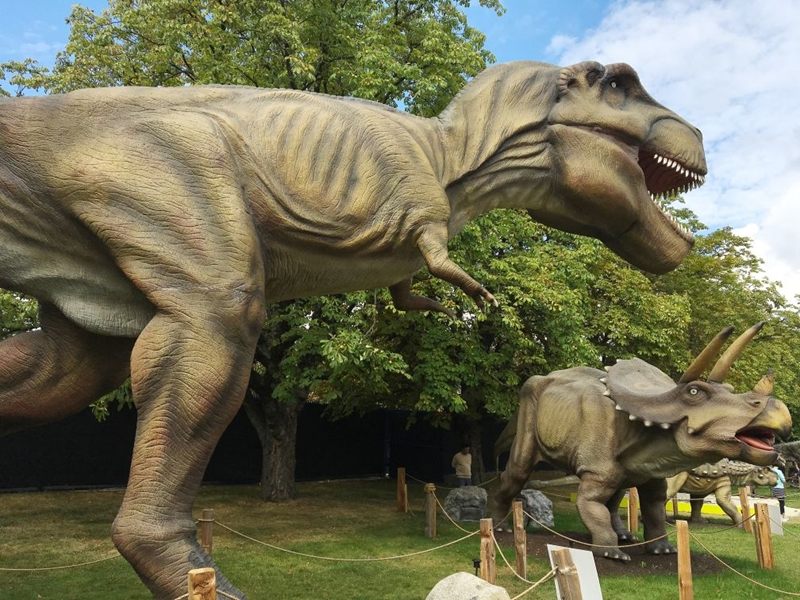 These could be your new housemates! All photos courtesy Able Auctions

At a time when many people’s workplaces are empty and quiet, Jeremy Dodd’s is suddenly crowded with creatures from the Cretaceous and beyond. Dodd, the owner of the British Columbia-based Able Auctions, is gearing up to sell a gaggle of animatronic dinosaurs on August 6. But before the Mesozoic mechanical menagerie finds a new home, it’s hanging out at the auction house’s warehouse, where it’s causing a prehistoric ruckus.

The auction facility can run a maximum of eight or nine of the electronic beasts at a time, and when it does, heads nod, eyelids blink, and mouths open and slam shut. Tails arc across the ground, barrel chests rise and fall as though the animals were breathing, and roars ricochet off the walls. (The Triceratops’ is a little like a tinny cow mooing its head off.) “It sounds like a dinosaur farm in there,” Dodd says.

Animatronic dinosaurs have been popular components of exhibits in such institutions as London’s Natural History Museum and the Smithsonian National Zoo, which, of course, are not able to display living examples of the real thing. The particular prehistoric crowd up for auction in British Columbia was “part of a local company here that toured the world doing dinosaur exhibits,” Dodd says. (The Vancouver Sun reports that they may have been offloaded by a company that entered bankruptcy in May, roughly a year and a half after buying the assets of an outfit called Dinoking Tech.)

Prospective Jurassic Park rangers can rest assured that the T. rex, Velociraptor, and sauropods are “all up and running,” Dodd says. “Every one of them is functional.” The dinosaurs have rubbery exteriors stretched over a steel-frame skeleton. Instead of bellies full of chewed-up plants or smaller, unfortunate prehistoric creatures, these behemoths are full of foam, plus rumbling motors and gears. They plug into controllers, through which a human handler can dictate how often a particular dino jerks to action, or, say, how far its tail should wag. Many also rely on motion sensors, and put on a show whenever someone gets close.

Dodd says that, while the menagerie roars to life, cars often pull over and gawk at the gargantuan T. rex and the 72-foot-long brontosaurus, which are too large to fit in the building. The dinos can be sold as one-offs—a small apatosaurus may go for as little as $250 Canadian—or as a delightfully dissonant group. Dodd says he’s had inquiries from a dinosaur-themed liquor store, zoos, restaurants, and ordinary folks who want a backyard creature to entertain their grandkids.

The auctioneers were surprised to see how quickly word spread about the sale—they’ve fielded inquiries from the U.K. and Australia, as well as across Canada and the U.S.—but Dodd understands the animatronic appeal. They can give us a tantalizing glimpse of a world we’ll never see up close (without fear of being gobbled up). “We know dinosaurs existed, we know they walked where we’re walking, but no one has seen a real one,” Dodd says. Though researchers have recreated such experiences as dinosaur breath, the whole sensory picture is still hard to piece together. “People love mysteries,” Dodd says, “and this is a mystery, what it would have been like back then.”

Was it a teenage T. rex or another species entirely?
dinosaurs

How Scientists Are Recreating Dinosaur Breath

At the Field Museum, visitors can now get a whiff of the Cretaceous.
Video