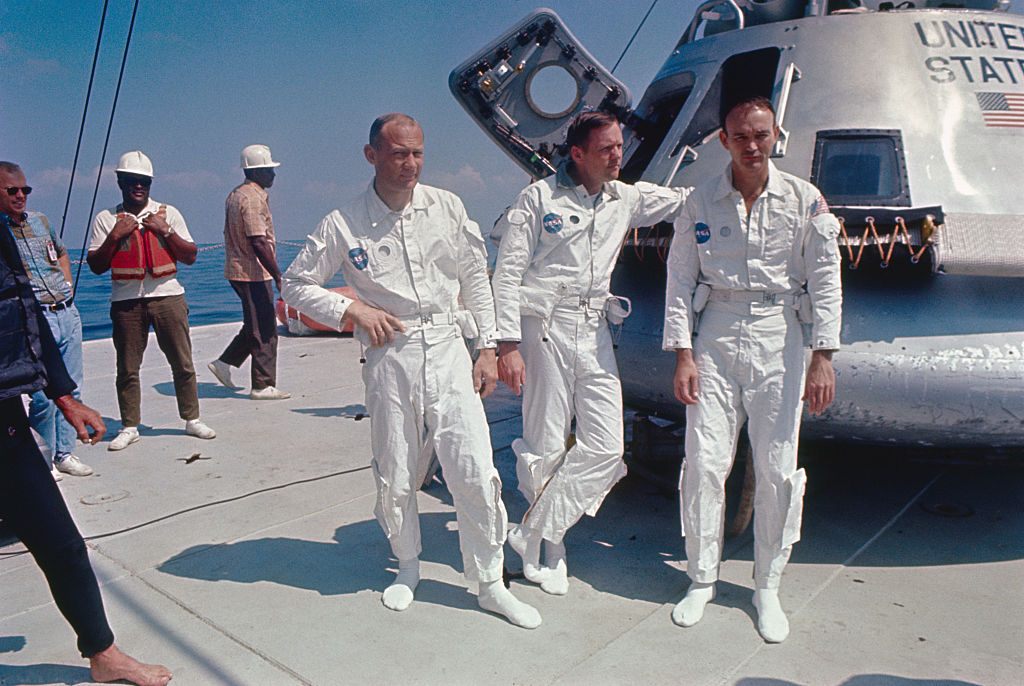 Buzz Aldrin, Neil Armstrong, and Michael Collins in front of one of their training capsules. Bettmann / Getty Images

In July of 1969, three men stepped into a small capsule perched atop a nearly 400-foot-tall rocket. They were to travel 238,900 miles, through a crushing vacuum, at thousands of miles per hour, land delicately on a barren, airless rock—and then make the trip home. Survival was not assured.

The three Apollo 11 astronauts—Neil Armstrong, Buzz Aldrin, and Michael Collins—knew they might not make it back. Just two years earlier, during an Apollo 1 launch rehearsal, a similar capsule had caught fire, killing the entire crew. Things could go wrong; they had before.

All three had families, though, who had to share in their risks, so the astronauts tried to find some measure of security for their wives and children should the worst happen beyond the surly bonds of Earth. They did so in a very American way: by capitalizing on their fame. In the weeks before the launch, all three men autographed hundreds of envelopes, each with a special design commemorating the mission and a postage stamp celebrating a previous Apollo mission. These envelopes were to be postmarked on launch day or Moon-landing day, ideally increasing their value as collectibles. If the astronauts didn’t return, their families could sell these “insurance covers,” as they were known, to stay afloat.

“It was driven by the fact that, given the nature of the astronauts’ livelihood, they were not able to secure much life insurance,” says Howard C. Weinberger, a collector and author who has written extensively about the Apollo program.

NASA had its own insurance program, but it “originally did not cover astronauts when flying—it was considered high risk and experimental,” according Brandi Dean, a spokesperson for NASA’s Johnson Space Center. That left the most dangerous and defining part of the astronauts’ job uninsured by their employer. It’s not true, Weinberger says, that no one would insure the astronauts during the mission. They were able to get private insurance—it just wasn’t enough. “Since we were unable to obtain adequate life insurance due to the high risk nature of being an astronaut,” Buzz Aldrin later wrote on the certificate of authenticity that accompanies his insurance covers, “we signed this group of covers and evenly distributed them to our families for safe keeping while we performed our mission.”

Weinberger says it’s unclear where the idea to do covers or envelopes originated, but stamp collecting was very big at the time, and the astronauts had become friendly with a group of Houston philatelists who’d been producing envelopes celebrating the space program. That group designed some of the Apollo 11 envelopes, which the crew then signed during their weeks-long preflight quarantine. (Weinberger notes that insurance covers have nicer, more careful signatures than many other space collectibles.) An astronaut not on the launch then got them postmarked in Houston. Because the project was not officially sanctioned, there are no NASA records for it; Weinberger estimates that between them, the astronauts signed between 500 and 1,000 of them.

Of course, Armstrong, Aldrin, and Collins did make it safely back, and went on to sign many, many more autographs over the years. In the morbid way of collectibles, that should have made the insurance covers less valuable—there are plenty of other ways to get an Apollo 11 autograph. But Robert Pearlman, editor of collectSPACE, says the insurance covers “had a great story behind them. Collectors like that.”

“The appeal of a cover is that it had to be there,” Pearlman says. “If you wanted to have that connection to the date and place, you had to go there.” The postmark is a time-stamp that captures a moment of uncertainty, when no one knew if the man who signed it would be alive in a few days.

The practice of creating insurance covers continued through Apollo 16. (Apollo 15 was mired in scandal after returning astronauts sold covers they’d taken with them to the moon; NASA banned the crew from ever flying in space again.) Aldrin began selling them from the beginning, Weinberger says, and more and more slowly made their way to collectors. As interest in space memorabilia really started to take hold in the 2000s, the market price for insurance covers has stayed pretty consistent, starting at about $5,000 a piece. But that didn’t include Armstrong’s—his collection, which he closely held while he was alive and which passed to his family after his death in 2012, didn’t begin to become available on the market until now. These covers have begun fetching higher prices.

Most often, though, insurance covers are near the lower end of the space collectibles hierarchy. As Pearlman explains, they’re not among the rare objects that have actually been in space, or the even more rarefied objects that have been on the Moon, such as the lunar landing manual used by Armstrong and Aldrin to make their descent (which did not sell in a recent Christie’s auction, with an estimate in the millions). They’re not one-of-kind Earth-bound objects such as the mission control recording of the landing or Neil Armstrong’s gold medallion. But as human reminders of just what those astronauts risked to get to the Moon—and what might have been running through their minds and the minds of their families—they tell a hell of a story.

These little gems are not your typical images of space travel.
space exploration

The Moon Went on Tour Through England

It dangled over church pews and disco dancers in Dorset.
objects of intrigue

“Fallen Astronaut” honors those who died in the Space Race, with a few notable omissions.
Video • AO Docs