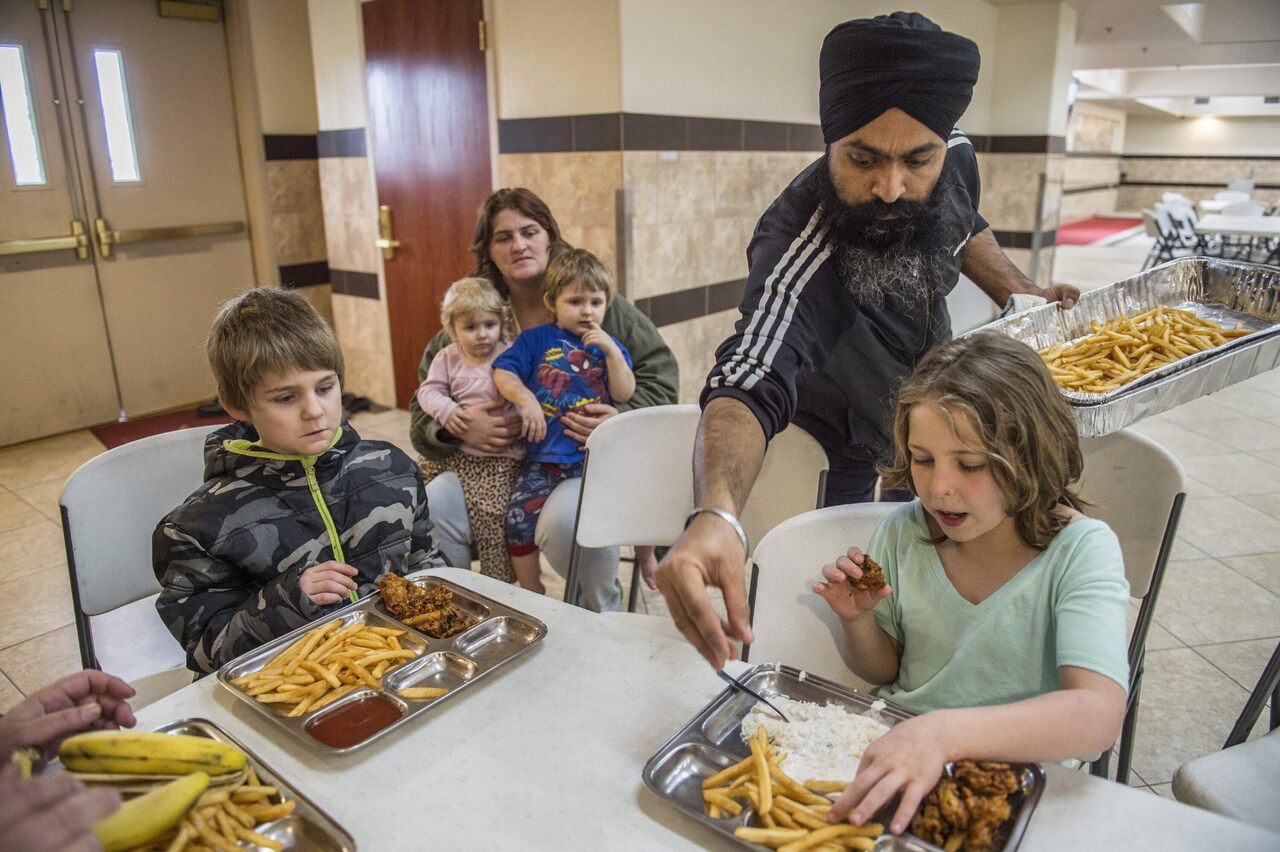 At a Sacramento gurdwara, Amarjit Singh dishes up food to a family forced to evacuate under the threat of a catastrophic dam spillway collapse in 2017. ZUMA Press Inc/Alamy Stock Photo
In This Story
Destination Guide

On a clear fall morning earlier last year, Kashmir Shahi received an urgent call from the Salvation Army. The organization wanted to know if he would be able to provide food for more than 700 people at a Santa Rosa shelter who had been displaced due to the Kincade Fire burning through California’s Sonoma County.

“They called me at 11 a.m.,” Shahi remembers. “They needed the food at 4 p.m. I live in Union City, and Santa Rosa is an hour and a half drive from there. They asked if it was possible and I said, ‘We will make it happen.’”

Shahi is a member of the Gurdwara Sahib of Fremont, a Sikh temple in Northern California. He immediately put out word to his congregation, and other members assembled to prepare food in the gurdwara’s kitchen. That afternoon they drove rice, beans, bananas, cake, chips, and oranges up to hundreds of hungry evacuees.

It was hardly the first time Shahi and the broader Sikh community have mobilized to help victims of California’s natural disasters. “I’ve been doing this since 2009,” Shahi says. “I know what it takes to do that much food.”

Sikhism, which dates to the 15th century, is a monotheistic faith guided by the teachings of 10 spiritual leaders, or gurus. Gurdwara literally means “home of the guru,” and the temples are regularly opened to those in need. As wildfires and other disasters have ravaged Northern California in recent years, gurdwaras have mobilized to provide aid.

During the Kincade Fire this past fall, gurdwaras in Fremont, San Jose, and Santa Rosa prepared and served over 1,300 meals to affected residents. In 2017, when the potential failure of the Oroville Dam’s main spillway caused the evacuation of nearly 200,000 residents in the Sacramento area, gurdwaras put out calls for volunteers and opened their doors to those displaced. Later that year, San Jose’s gurdwara—the largest in the nation—partnered with the city’s police officers to send supplies to communities affected by the North Bay fires, which destroyed more than 6,000 homes. The 18-wheeler they dispatched was filled with diapers, food, and water.

Sikh communities are uniquely equipped to provide sustenance for huge groups. Nearly all gurdwaras have fully stocked kitchens due to a core tenet of Sikh practice: langar. Langar is a free, vegetarian meal provided to anyone who comes to a gurdwara. The food itself is made and served by volunteers from the congregation. Traditionally, it is eaten while sitting on the ground, a symbolic gesture indicating that all who partake of the food are equals.

Karanbir Singh, who helped organize the Sikh Center of San Francisco Bay Area’s outreach during fires in Santa Rosa two years ago, says that the community’s response is a natural outgrowing of its scripture. “We follow the teachings of Guru Nanak [the founder of Sikhism], and one of them is to share with other people and to help them,” he says. “We try to help out anybody who comes here; day or night we provide them free food or lodging.” Though the Center is not equipped to provide housing for long-term stays, he says that some people who had lost their homes in the fire stayed for two weeks.

Prior to the Tubbs Fire, in 2017, most gurdwaras had been operating individually to provide aid. That fire, which killed more than 20 people and burned through nearly 40,000 acres, was the worst the state had seen in years. Given the scale of the necessary relief efforts, volunteers realized that creating some kind of coalition would be the most effective way to help.

Members of roughly 20 gurdwaras, from Sacramento to San Jose, formed a group called Sikhs for Humanity. Now, when natural disasters strike, the group keeps in touch through WhatsApp and Facebook groups to coordinate collecting supplies or preparing food. During the 2018 Camp Fire in Butte County, Sikhs for Humanity collected food and blankets to send to a local shelter, while a gurdwara in Stockton organized a blood drive. During the first week of the Tubbs Fire, Shahi estimates that gurdwaras in Northern California served more than 5,000 meals to evacuees and first responders.

When the group hears about a wildfire or other potential emergency, members usually begin by reaching out to relief organizations such as the Red Cross and the Salvation Army to find out what the needs are on the ground. “The idea is, number one, not to overflood with items that are not needed, and number two, to streamline a process of providing these things,” Shahi explains.

Because gurdwaras also have regular outreach actions during the year, organizers know who they can depend on. The Fremont gurdwara, for example, takes part twice a year in Feed the Hungry events in conjunction with San Francisco’s GLIDE Memorial Church. “When the disaster comes, we have to act quickly,” Shahi says. “So during these events, volunteers learn how to manage things and how to build a team. And, God forbid anything happens, they already have experience.”

The Sikh community’s commitment to aid extends beyond its gurdwaras. Bhupinder Singh Kooner is a co-founder of SEVA, a relief organization based in Northern California. He and his friends started the organization around 2012 with the intention of feeding homeless veterans.

“Pretty soon, we realized you can’t tell who’s a veteran and who’s not,” he says. “So we expanded. In Sacramento we’ve been serving the homeless every Thursday for six years. During the Paradise Fires we did 27, 28 straight days serving lunch and dinner, sometimes a combination of both.” Because the group operates year round, when disasters strike they have large reserves—of water, hygiene products, blankets, and warm clothing—to contribute.

In addition to reaching out to larger relief organizations, Kooner says that SEVA often uses Twitter to get in touch with local facilities that might be hosting evacuees. During the Kincade Fire, he says, “We found out where people were being evacuated to and called them directly to find out how many people they had, their capacity, what [they were] in need of.”

Though SEVA is not officially categorized as a Sikh organization, nearly all of its members identify as Sikh. Seva is also the term for the Sikh philosophy of selfless service. “There would be no SEVA without Sikhism,” Kooner says. “For almost everyone in our organization who’s Sikh, that’s our driving point. It’s what our Gurus taught us: trying to do the right thing, helping your neighbor.”

Kooner references the Nishan Sahib, the Sikh flag, which flies outside many gurdwaras. He says that it stands as a symbol to all who see it that they have reached a place that will offer them food and shelter, regardless of their background. That concept, Kooner says, is one that his organization “has just taken and mobilized.”

Though Sikhism was first founded in Punjab (a region now divided between India and Pakistan), there are presently more than 50,000 Sikhs living in the U.S., nearly half of whom live in California. Sikhs have lived in the state since at least the early 1900s; the nation’s first gurdwara was founded in Stockton, California, in 1912.

California’s Sikh community has particularly deep roots in the feeding of others. Many of the earliest arrivals to the state were farmers in California’s Central Valley. Nand Sing Johl, a rice farmer who was one of the state’s first Sikh landowners, is credited with introducing rice-cultivation practices in the Sacramento Valley. Didar Singh Bains, who immigrated to California from Punjab in the late 1950s, is still known as the “peach king of California.”

A focus on charity is not unique to Sikhism. Most religions emphasize the value of helping one’s neighbor; churches, mosques, synagogues and temples all mobilize with donations, supplies, and volunteers in the face of natural disasters. A 2012 report from the University of Southern California emphasized the outsized role that smaller faith organizations can have, as they are able to respond quickly to immediate and localized needs on the ground. In 2017, USA Today found that many religious groups partner with state and federal agencies to provide a large proportion of the country’s disaster relief.

But even outside of disaster, many gurdwara doors are always open. “We serve food 24/7 to anyone who comes, regardless of religion or anything else,” says Channy Singh, a member of the Fremont gurdwara. “In the gurdwara, the food is always cooking, always there in large quantities, in large pots. We use the same facility to prepare those meals for disaster-prone areas.” Because volunteers cook so frequently, when the need arises they simply double or triple the quantity of whatever they are making, knowing that the rest will be sent out of the gurdwara doors.

But Singh stresses that while a gurdwara kitchen is helpful when it comes to logistics, the core Sikh belief of feeding the needy is what inspires the community to do what they do. “It is more based on the religious principle, not necessarily the physical infrastructure,” Singh says. “Obviously the kitchen comes handy, but it is the principle that is the driving force.”

The Graveside Festival That Celebrates the Dead in Okinawa

Shimi, or “grave-sweeping festival,” takes place every April on the southernmost islands of Japan.
food

And nobody is quite sure why.
food

The reasons were both religious and practical.
Video • AO Docs

Snap judgments may spell trouble for what was once the king of California apricots.
Gastro Obscura

Beneath a layer of spines, this cactus sprouts asparagus-flavored buds.
Gastro Obscura

The unique style born out of the California Gold Rush blends the crispness of a lager with the flavor of an ale.
Gastro Obscura

Activists envision a bloodless future for the annual Dashain festival.
Read more
Thanks for sharing!