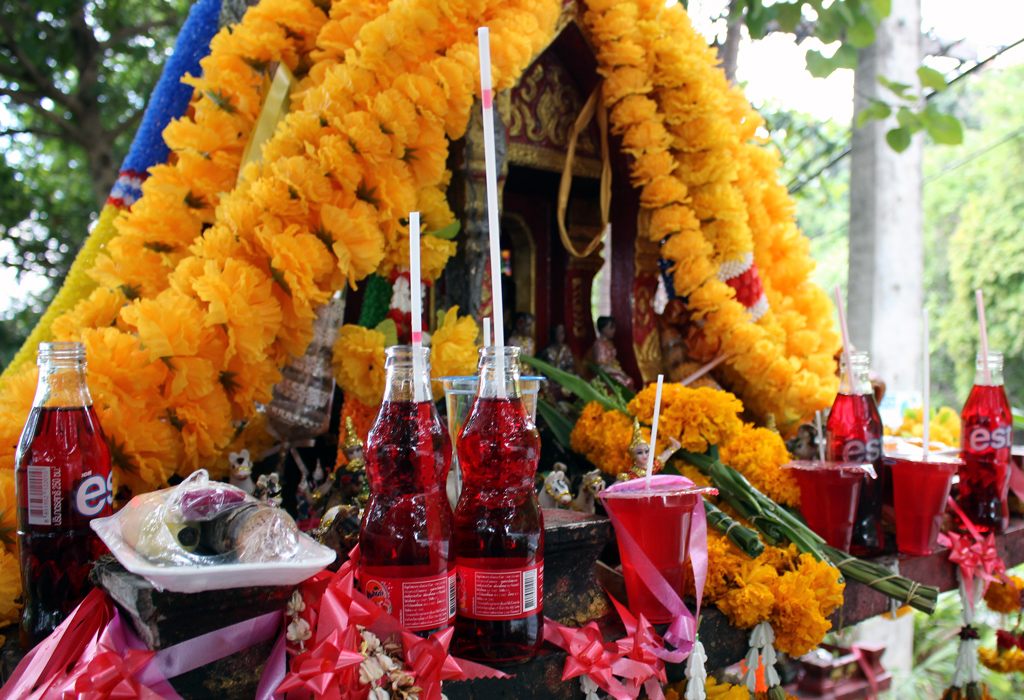 Gods and spirits are offered flowers, food, and Fanta. Per Meistrup/CC BY-SA 4.0
In This Story
Destination Guide

They are everywhere, ubiquitous to the point where they are nearly synonymous with the spirits themselves: small, plastic bottles of strawberry Fanta, placed solicitously in front of shrines, straws helpfully tilted towards the gods for easier sipping.

Turn the corner just off of Bangkok’s Charoen Krung Road, and you’ll spy a single Fanta in front of a simple concrete spirit house. At the popular night market Asiatique, a battalion of crimson bottles vie for space before the resident spirits. Even the mighty Erawan Shrine, a pre-Covid magnet to thousands of tourists daily, warrants a bottle or two of red Fanta, left among the flower garlands, coconuts, and platters of fresh fruit donated by those hoping to have their prayers heard.

But how did Fanta nam dang, “red water,” become the spirit drink of choice? How did Thailand—a country physically smaller than the state of Texas—become Fanta’s fourth-biggest market, ahead of both the entire United States and China? How did a strawberry version of the soda concocted by a Coke-deprived, World War II-era Germany find its way into the culture of a country halfway around the world?

“Thais aren’t the only people who give food when praying,” says Kalyanee Rudrakanchana, who points out that the Tibetans, Chinese, and Japanese also offer food to placate unhappy spirits. Rudrakanchana serves as a spiritual adviser to individuals and companies in search of auspicious locations for their businesses and offices. But she must also occasionally serve as a “ghostbuster” for locales already infected with restless spirits, finding ways to put them at ease.

The spirits she has communed with have yet to ask for red Fanta. Yet “offering sweet, red water at a shrine is something that is uniquely Thai,” Rudrakanchana explains. “Nobody knows why it has to be strawberry Fanta, but it probably has to do with its bright red color.” After all, she notes, “Thais are a very visual people. They probably think it looks pretty in front of the shrine or spirit house.”

The demand for Rudrakanchana’s very specific services shows how Thailand teems with the supernatural. Often, concessions are made to extrasensory beings to keep the peace. Many Thais believe that spirits reside in trees and the land itself. As a result, the small shrines known as spirit houses—also a tradition in Myanmar, Laos, and Cambodia—are a common sight, since spirits must have a place to reside when they are displaced by construction, lest they decide to move in with the humans.

Although 95 percent of Thais are Buddhist, animist beliefs are so firmly entrenched that spirit houses can be found at almost every building in Thailand. It’s just a matter of course, then, that these spirits must occasionally be appeased, or called upon for favors, with small gifts: a box of pandan-scented coconut jellies, an iced Frappuccino, or more commonly, a sweet, cool bottle of strawberry Fanta.

Coca-Cola, which today owns Fanta, is quick to point out that any soda consumption beyond its intended targets is beyond its control. “Thailand is renowned all over the world for its variety of delicious fruits,” says Karthik Subramanian, a marketing manager for Coca-Cola Thailand. “Fanta has successfully replicated those fruitful flavors in a more fun and colorful way, hence its popularity with Thais.”

Formal shrines for more widely recognized deities—currently closed to prevent the spread of Covid-19—also demand their own sugary tributes. Normally, the hundreds or even thousands of visitors to Bangkok’s many shrines deck them out with sodas, cakes, fruits, alcohol, and even full meals. In a country where female tree spirits receive regular offerings of pretty dresses and even the water buffalo can be magical, spirits available for petitioning include the Hindu trinity of Brahma, Vishnu, and Shiva, popular household divinity Kuman Thong (who often appears as a sweets-obsessed young boy), and real-life historical figures, such as the revered Thai king Rama V. They all require their own specific gifts.

“It comes down to what is known, supposed, or perceived to be what the deity wants,” says Phil Cornwel-Smith, author of the pop culture book Very Thai. “Kuman Thong always seems to have both red and green drinks in pairs. Rama V shrines are offered cigars and shots of brandy, as he liked those treats.”

The rules about what to offer are widely understood. Buddhist monk figures may receive pure water, but animist spirits, saints, and deities get nam waan, or “sweet water,” says Christina Krause, a half-Thai non-governmental organization worker who has lived her whole life in Bangkok.

According to Krause, the families of many Bangkokians originally hail from China, where the color red is auspicious and lucky. Many Thais associate the color red with blood, signifying both fertility and sacrifice. Before soft drinks existed, Thais sweetened and colored water for the spirits with nam ya thai thip, a pink-hued blend of palm sugar and six herbal essences. Today, sodas such as red Fanta provide the same result, with less effort. “Strawberry Fanta represents sweetness, the color red, and convenience,” says Krause. “These three factors are embedded in the Thai culture.”

But it might just simply come down to personal taste. Offerings to the spirits are often what the worshipper prizes themselves, whether that means juicy roast duck, steamed palm-sugar cakes topped with shredded coconut, or an icy bottle of red Fanta. That’s according to bartender Vipop Jinapha, of the Bangkok speakeasy Q&A. Jinapha, who enjoys mixing strawberry Fanta with rum and pineapple juice for a spin on Planter’s Punch, says red Fanta’s popularity at the shrines is obvious. “It just tastes good,” he says. “It takes you back to when you were a kid.”

Why Brigham Young University Had a Secret Cola Vending Machine

The complex relationship between Mormons and caffeinated soda.
food

The owner of Alcôa has devoted decades to recovering lost pastries.
festivals

Sikhs statewide have organized to feed their fellow Californians in crisis.
Video