How to Make Sense of an Undrowned Town - Atlas Obscura
Want to see fewer ads? Become a Member. 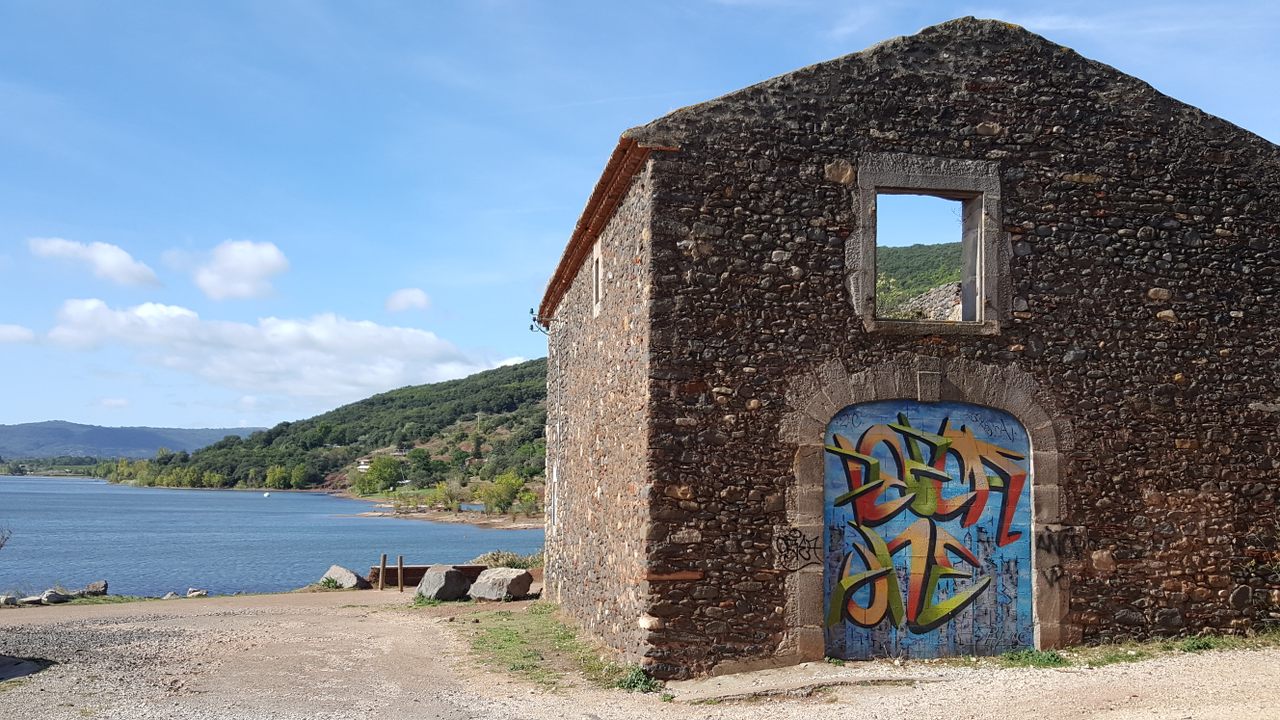 A graffitied former home beside the lake. Sam Harrison
In This Story
Place

Half a century after it was abandoned, this ghost town is coming back to life.
Destination Guide

In the 1950s, Celles was a tiny, nondescript village in the Salagou Valley in southern France, an area known for its dark red soil and dry climate. Most of its 63 inhabitants were farmers and winegrowers whose families had lived in the area for generations.

Then, local government decided the inhabitants of Celles would be evicted so the whole area could be drowned.

At the time, France was facing a viticulture crisis: the wine market was saturated, and prices were low. Local authorities hoped that creating a reservoir in the area would allow farmers to diversify their crops and move away from wine production. They chose the Salagou Valley.

Between 1959 and 1968, the inhabitants of Celles were pushed to sell their homes to make way for the reservoir. Those who didn’t were expropriated, their houses left empty.

In 1968, the dam on the Salagou River was finally finished. The water crept up slowly, covering the red clay landscape. But just short of the village, it stopped. In the original plans the water was supposed to rise to the 150-meter altitude mark. But in the end it stopped permanently at 139 meters, 4 meters lower than the village.

Celles sat empty for nothing, and quickly fell apart. Squatters moved in for a time; looters cleared everything out, from the faucets to the front doors.

But now, thanks to the efforts of a small but very determined group of people, three new families are signing long-term leases to rebuild houses and move back into Celles, over 50 years after the original inhabitants were evicted.

Joëlle Goudal is the current mayor of Celles, where 35 people live in the Celles municipality and three people live in the village proper. Goudal has been fighting almost her entire life to keep her village alive. “We wanted a lively village. A village that’s lively is a place where people work; where kids go to school, where people wake up in the morning to go to their jobs.”

After the lake was formed, the region transformed. It had been an arid valley inhabited by a few farmers and winemakers, known for its red soil that stained your shoes and clothes. Once the dam was in place, it quickly became a popular tourist attraction known for its scenery, hiking and biking trails, and of course the watersports the lake made possible.

Goudal was five years old when her family was forced to move. Her father took it hard. On weekends, he would come back from his job as a farm worker and take her to the ruins his family owned on the other side of the lake, facing the old village of Celles. “There was a little bench. He would sit and he would cry, and I would play with the goats,” she recalls.

After a few months, her fed-up mother put her foot down. “Rebuild the ruins. Do something,” she told him. “Break some stones instead of crying. It’ll have the same effect, but at least it’ll be useful.” So he started rebuilding the ruins of the farmhouse. The Mas de Riri is now a successful seasonal restaurant and campground, one of only two businesses in the municipality.

Goudal’s family and their friends never gave up on Celles, especially her father. “When the last expropriated people were forced to leave, a small group of people said ‘no,’” she says. They formed a municipal council and continued participating in regional politics, even though there were no inhabitants left.

Her father became mayor in 1972. He wrestled with local government for years to keep Celles from being absorbed into another municipality, and finally won in 1990.

Goudal, then a young punk who believed rock ‘n’ roll would change the world, took over from him when she was 29. “I would show up at departmental council meetings with black makeup and pigtails, a mini skirt and ripped tights,” she remembers. “No one gave me a dime of funding, not with that look.” But she and her friends’ punk outlook on life also allowed them to imagine a different kind of village in Celles. “It allowed me to be so offbeat from other politicians, that we did a different kind of politics here. We were much more open and responsive to what people were saying.”

Goudal isn’t exactly a punk these days: at 55, she has ditched the pigtails and wears colorful outfits—today it’s a turquoise sweater and flowered shirt. But the village she and her municipal council are trying to build is definitely offbeat, and very different from the village her parents were forced to leave. “The village is going to be reborn, but it won’t look how it did 50 years ago. It’s turned towards the future.”

Goudal’s father died in 2009. In 2010, the department “sold” the whole village and its buildings to the municipality for one euro, a symbolic gesture. Where her father’s mission was to make sure Celles didn’t become part of a different municipality—didn’t cease to exist, basically—Goudal is more focused on what the future of the village will look like.

As the Salagou Lake continues to grow as a tourist destination, Goudal wants to set a different tone and make sure that Celles becomes a village where people live and work, not a place that hosts tourists six months a year. “People were expropriated for this land,” she says. “It’s out of the question to let people today make money off of the people who were forced to leave.” The municipal council has agreed on four founding principles for the new Celles: No land speculation, each new household needs to contribute to the local economy by moving their job or company to Celles, social/income diversity, and environmentally friendly construction, because part of Celles is a classified European Natura 2000 site, protected for the diverse species of birds that live there.

The municipal council has a plan in place to make this happen. For starters, they’re working with a type of French lease called a bail réel solidaire, a long-term contract designed to prevent land speculation, that separates ownership of the land and the building. The three families moving in will be in charge of rebuilding the ruins of the house they’re signing for, in exchange for this lease.

The municipal council also selected the new inhabitants of Celles out of about 200 applications. According to Celles’ rules, each family will need to bring at least one job/company to their new home. “We didn’t have a lot of houses, so the only solution that we found was not to select the people who would live here, but to choose the companies that would move here.” Goudal says. “We chose people based on their project or the enterprise they will bring.”

They’re also working with different types of leases to make sure that Celles has income diversity, including some social housing. All tourist business will be conducted in a single co-op building, and will be run collectively.

Not everyone is thrilled about the project, however. Some of the people whose families left don’t like the current plans. “Some people think it’s good, but it would be especially good if it wasn’t in their [former] house,” according to Goudal. “And some people have been angry for 50 years. And this hasn’t calmed their anger.”

The closest houses are just a few dozen feet from the water (the water level is now fixed permanently at the 139-meter mark). The ruins are fenced off, but the families who signed leases will be beginning construction in the next few months. The only buildings that are currently standing are the church and the town hall. Only three people live in the village of Celles itself, and around 35 people live in the “commune,” or municipality, which covers 750 hectares. Goudal hopes the final number in the village will be closer to 35, as more families move in. Whether or not the project will work still remains to be seen; the reconstruction of the old village has not yet begun. But Goudal and the people of Celles are used to fighting for what they want; it’s what they’ve been doing for the last 50 years.

Goudal’s father never did get to see the culmination of a lifetime of work. “But I think he’d dig the project,” she says. “I’m sure that he’s super proud.”

During the winter months, the iconic French site casts a perfect shadow on a bay full of history—and quicksand.
caves

Archaeologists test how our ancestors may have used this (nearly) lost skill to navigate caves and other dark spaces.
collections

“It’s more than a hobby, it’s a passion.”
caves

Scores of ancient paintings and other works will soon succumb to the sea—but a passionate team is determined to preserve this 'bubble of memory.'
Video