This Map Charts the Complex Landscape of an Artist's Face - Atlas Obscura
Want to see fewer ads? Become a Member. 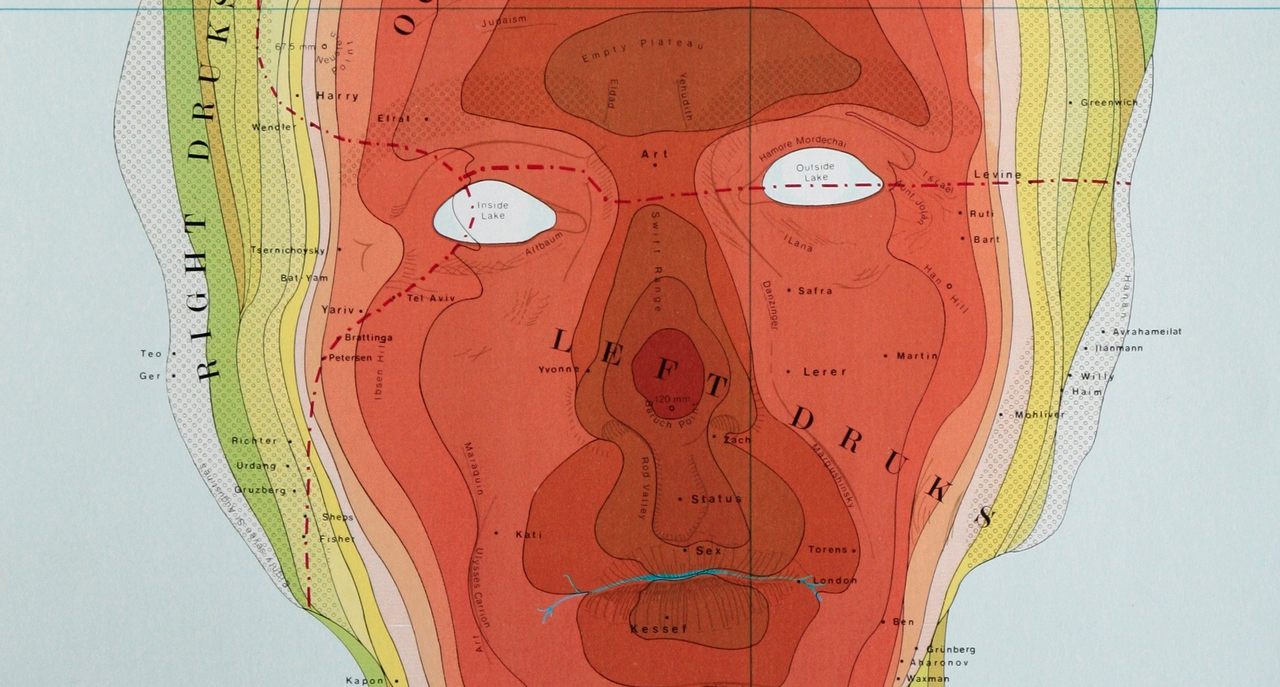 It isn’t unusual to come across maps of fictional worlds or mistaken regions explorers once thought were real. But in the case of the map above, the creator intentionally charts an entire land that—literally—only exists in his head.

On November 8, 1973, the Israeli artist Michael Druks mapped Druksland, a cartographic display capturing his life story. Outlining the shape of his head, Druks’ conceptual map incorporates features you would see on a topographical map, including coordinates, bodies of water, and a map legend. Yet the map also serves as an unconventional self-portrait, the coordinates corresponding to major life events, significant people, and important institutions. Druks shows how the contours of a face could be a more complex terrain than any geology on Earth.

“In this work, Druks’s head turns into a topographic expanse,” wrote Galia Bar Or for the Michael Druks: Travels in Druksland exhibit at the Museum of Art Ein-Harod. It’s “made up of spaces that contain the landscapes of his life with the inner (psychological) and outer (social) dynamic that shapes them on various levels of consciousness.”

Born in Jerusalem in 1940, the England-based artist had a lifelong interest in maps from his father, who was a librarian in the map department of a print house and library. In 1973 at the age of 33, he was inspired by his “physical, political, and mental isolations from the space around [him] in Israel,” he says.

To create his self-portrait, he projected a grid of stripes on his face, photographed himself, copied the image onto transparent paper, and marked out the contour lines. Printing each color separately through offset lithography made his face appear three-dimensional, similar to the sloping hills and deep valleys of the earth, explained Bar Or. Druksland was finished in 1974.

“Translation of three-dimensional terrain into the two-dimensionality of the map is no simple task, and this difficulty is intrinsic to cartography,” wrote Bar Or. “The solution that Druks found for this and the production technique that he chose are closely connected to cartography’s technological and historical contexts.”

Just like a topographical map, the lines and graduated hues show elevation, while the blue represents bodies of water and the brown indicates mountain ranges. “The eyes are like a lake,” Druks says. “The lips are a bit like a river. The blue can represent either air or water aiming either up or down—outside or inside.”

Druks splits Druksland into three major zones: a small region of the right side of his head is “Right Druks,” his nose, lips, and chin fall under the larger area of “Left Druks,” and his crown and forehead appropriately make up “Occupied Territory.” The legends also inform how Druks created the map. He describes age lines, vegetation, and the color scale of heights in millimeters.

An assortment of words and phrases are scattered across his face and head, referencing influential teachers, addresses of apartments, cities, names of family members, friends, schools, galleries, and owners. He also has points with the names of fellow artists, whom Druks thought were important contributors and detractors of the Israeli art scene, wrote Gil Stern Goldfine in the Jerusalem Post.

The ambiguous nature of Druksland stirs all kinds of interpretations, and Druks welcomes each one.

The Enduring Mystery of James A. Garfield's Immigration Scandal

An Online Collection of Maps Highlights the World’s Saddest Spots

The world's most mapped city, as you've never seen it before.
Video • Object of Intrigue