The American Government Is Searching For Its Own Lost Art - Atlas Obscura
Want to see fewer ads? Become a Member. 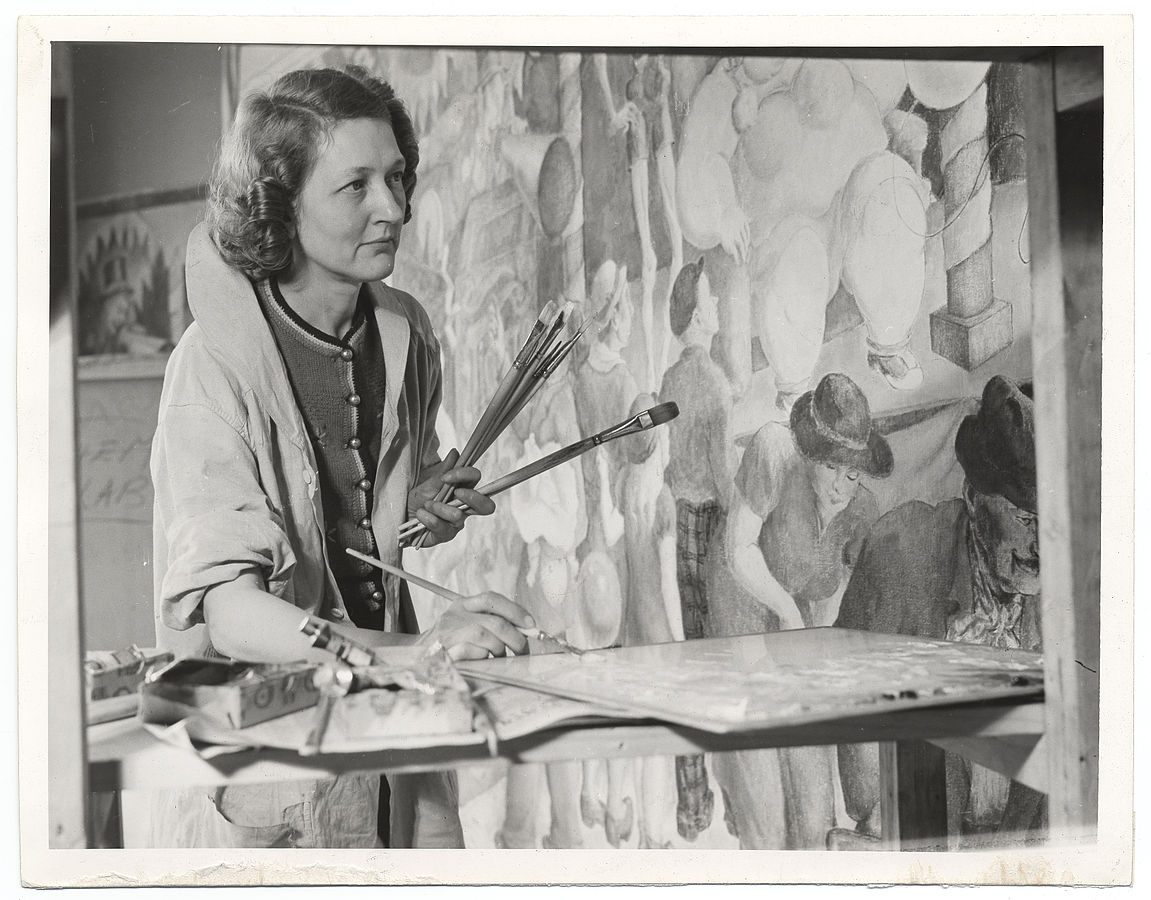 They are not America’s art police. There are no midnight raids, covert surveillance or undercover operations. Most everything is done through cordial emails, polite phone calls and, if necessary, civil court. While glamour is not top priority, make no mistake: The United States government wants its art back.

Special Agent Eric Radwick, who works in the Office of Investigations for the General Service Administration’s Office of the Inspector General, is working to do just that—to locate and recover government-owned long-lost artwork of the New Deal-era federal arts programs. It could be hidden in plain sight. It could be in grandma’s attic. It could be in the possession of art collectors. No matter if it was found in the trash or cost a few grand, the art is federal property and the government is looking for it. That means regularly monitoring auction house listings, Craigslist and eBay. It means coordinating with the art community about tips. It also means waiting for calls to the GSA hotline.

Most people, upon realizing they are in possession of federal property, are cooperative. Few are not, understandably reluctant to give up art that’s been in their family for decades. But as Radwick likes to say, “My uncle also lost a lot of art many years ago. My uncle just happens to be Uncle Sam.”

On May 9th, 1933, President Franklin Delano Roosevelt received a rather curious letter from an old classmate and professional artist George Biddle. Since his March inauguration, President Roosevelt had implemented the most aggressive 100 days agenda in the country’s history in hopes of solving the Great Depression. While absurdly busy—he had just delivered his second Fireside Chat and was about to sign both the Farm Relief and Unemployment Relief bills—this note gave him pause. In it, Biddle wrote that he had long admired the Mexican government for paying artists “plumbers’ wages” to paint murals on government buildings expressing Mexican ideals. Perhaps the President should consider something similar in the United States?

As Biddle wrote, “[Artists] would be contributing to and expressing in living monuments the social ideals you are struggling to achieve. And I am convinced that our mural art, with little impetus, can soon result, for the first time in our history, in a vital national expression.” In his diary, Biddle admitted that he really didn’t know Roosevelt all that well—save for encountering him at the school infirmary where “boys who were underweight were served crackers and milk”—but the letter got the President’s attention. A month later, Biddle met with members of FDR’s administration in Washington about his proposal. By the end of 1933, the first national art relief program—the Public Works of Art Project—was established.

Over the next decade, the American art scene flourished thanks to the financial encouragement of the government. According to Smithsonian Magazine, in the first four months of 1934 alone, nearly 4,000 artists were hired to produce over 15,000 paintings, murals, sculptures and other works of art for federal buildings across the country. In 1935, the Works Progress Administration’s Federal Art Project was established, the largest of these programs both in scope and number of artists employed. In its eight-year existence, it’s believed that over 200,000 artworks were created under the project while employing such before-they-were-famous luminaries as Mark Rothko, Marion Greenwood and Jackson Pollock. At a time of crisis in America, these programs not only provided an enormous collection of artwork for public consumption, but gave the creators a sense that they were needed. “It made them feel like they counted,” says Virginia M. Mecklenburg, Chief Curator at the Smithsonian American Art Museum , “What they did and created had … value for the country and their fellow Americans.”

A few of the pieces produced for these programs are considered American masterpieces, like Marvin Beerbohm’s Automotive Industry mural, the “Scrub Woman” ceramic sculpture by Gustave Hildebrand and John Sloan’s Fourteenth Street at Sixth Avenue. Many, many more are not. As Mecklenburg points out, these programs were all basically work release programs—after all, those who applied had to prove they were impoverished and actual working artists. Often, artists were assigned projects by either federal, local or regional agencies to create works for particular federal buildings or public institutions, like libraries, schools, housing projects or the Department of Interior. Their latitude in picking the subject matter and how they went about creating it was rather limited.

However, says Mecklenburg, “[their work] helps us understand who we were and what we thought at a particular time … It’s not art about art. It’s art about us.”

The works are also all federal property, commissioned and paid for by the United States government. According to the GSA’s legal fact sheet, the courts have determined that at no point can the federal government abandon property—even due to “inactivity” or “neglect.” When it comes to Federal Art Project works, the “GSA recognizes that there have been many stories of works of art abandoned or even thrown in the trash,” but the “GSA does not believe the employees of the New Deal agencies were authorized to treat the property of the United States in this manner.” Furthermore, because all of these murals, paintings, and sculptures, were funded by taxpayer dollars, the art is required to be loaned to and displayed in a place where “the public has access free of charge and which are … operated exclusively for educational, scientific and charitable purposes.”

This is why the GSA’s Fine Arts Program—and Special Agent Radwick—are in hot pursuit of these works of art. And there are a variety of reasons that they have gone missing in the first place, a few more innocent than others. Sometimes the government simply lost track of them, like the several Sophie Brannan landscapes that were “rediscovered” hanging in a San Francisco public library in 2015. Or a piece of artwork is not immediately recognized as valuable or government property, like in the case of Anne Fletcher’s Iris Garden. The story goes that in 1970 a 12-year old Berryville, Virginia student was told by his principal that, as a reward for helping to clean out the soon-to-be demolished high school, he could take home whatever art he could manage to carry in one trip. One of the pieces he took was Fletcher’s beautiful garden landscape. It hung in his home for four decades before he realized what he had was a forgotten classic (thanks to an episode of Antiques Roadshow).

Recognizing New Deal artwork is not as easy as it may seem. With any luck, there’s a brass plate on the frame that reads “WPA Federal Art Project” or a paper label on the back that indicates completion date, artist and title of the piece. Unfortunately, that’s not always the case, explains Jennifer Gibson, Director of GSA’s Art in Architecture and Fine Arts Division, who helps authenticate the works. A painting could be missing its original frame, the paper label could ripped off (intentionally or unintentionally) or other verifying documents could have been lost over the years. When that happens, they have to sort through decades-old paper records that are voluminous, unorganized and often not centrally housed—meaning, depending on the work’s original destination, the records could be at the National Archives or in other state, city or institutional archives around the country. As Gibson puts it, “It’s definitely a ‘needle in the haystack’ problem.”

Radwick says this is one of the GSA’s feel-good programs, in that they are bringing the art back to the people—even if a majority of the works are sorta pedestrian. “For some of this stuff, the beauty is truly in the eyes of the beholder,” says Radwick with slight chuckle, though he describes certain works, viewed up-close, as “truly awe-inspiring.”

According to the GSA’s most recent report to Congress and since the project began in 2001, 578 WPA works of art have been recovered with a comparative value of $6,659,350 (with John Sloan’s Fourteenth Street at Sixth Avenue leading the way with an estimated value of $750,000). After reacquisition, they are often re-loaned to various institutions, museums and public buildings across the country. Examples include Dorr Bothwell’s Steam Shovel, now at the Los Angeles County Museum of Arts, The Accident by Adrian Troy, at the Illinois State Museum and Virginia Pitman’s Four Phases of Labor, which lives at the Wyoming Museum of Art.

Radwick also notes that they make every effort to work with the possessor to get the artwork loaned to a nearby institution, as they did with a Michigan man who had bought a WPA-marked Leonard Jungwirth sculpture at a local antique mall. He requested that it be displayed at nearby Michigan State University with a plaque mentioning both him and his sister, who had attended the state college. Radwick says it was the least they could do considering the government can’t compensate individuals to get its property back, even if the artwork  “has been in the family for years” and its owners “were planning to sell it for a college fund for [their] kids or grandkids.”

As we come to the eighth decade since the New Deal federal arts programs ended, there are still many works of art whose whereabouts are unknown. Mecklenburg says a notable Oscar Bluemner work is still long-lost. The Charles Polowetski artwork stolen from the Mills Mansion in upstate New York has yet to be recovered. Goatlings by Tulita Boronda Westfall is certainly missing, though no one is completely sure it ever existed in the first place. According to the FBI’s National Stolen Art File, Torvald Arnst Hoyer’s idyllic Green Meadows is also still among the missing. Redwick encourages anyone who has information about these works of art or any other New Deal, federally owned art to contact him directly. Uncle Sam would appreciate it.

When Batgirl Saved the Day and Demanded Equal Pay

These hybrid productions are unique in mapmaking.
nature

The Man Searching the World for Artifacts Bearing His Name