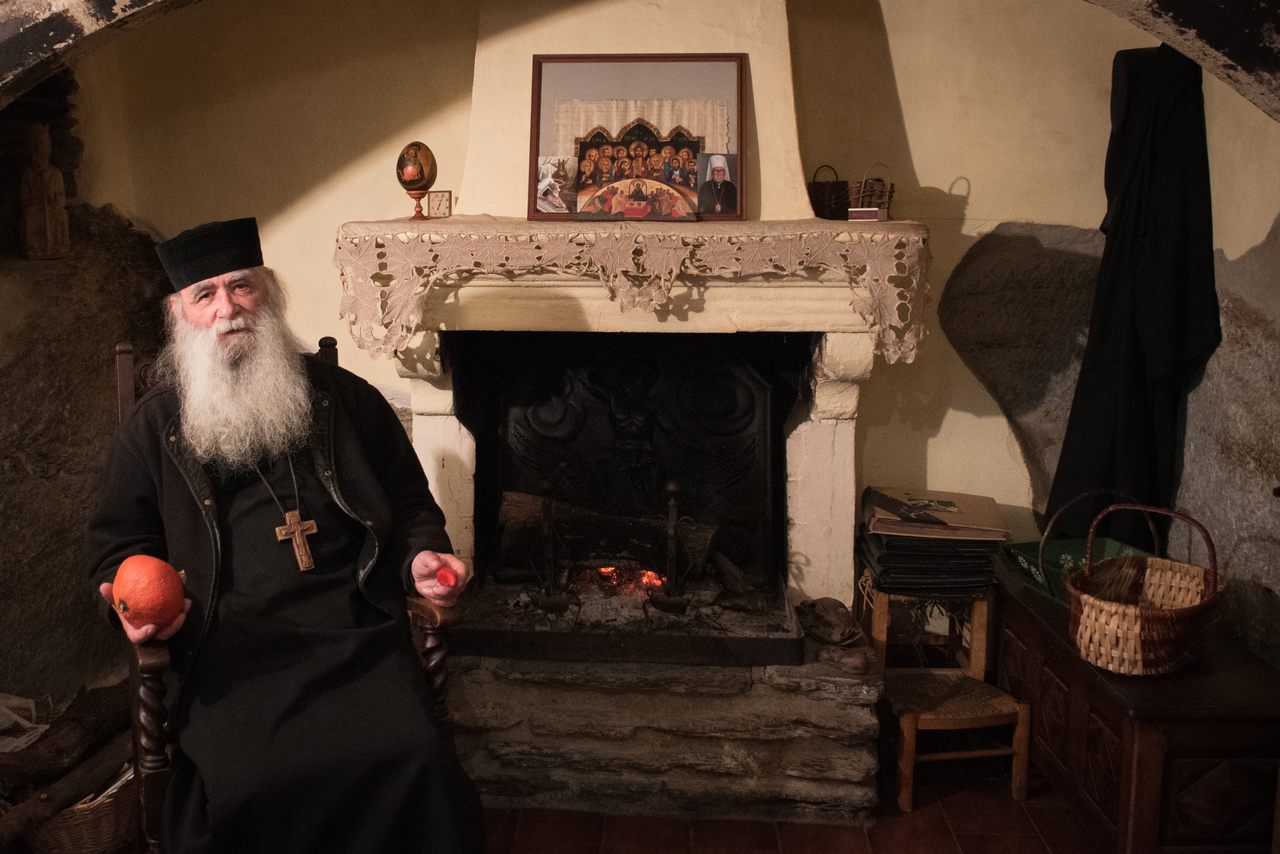 Frère Jean inside his monastery. Anna Richards
In This Story
Place

Cloistered comestibles are served with style at this French Orthodox monastery.
Destination Guide

My host pours freshly brewed coffee and, with the charisma of an actor, regales me with tales of his travels, celebrity encounters (Liz Taylor, Salvador Dalí, Marcel Marceau), and high-fashion photo shoots in Paris. Light from the open fire bounces off the gold leaf wall frescos and polished wooden table. It feels like a film set, but it’s an 11th-century monastery in the Cévennes, Southern France, and my host is an orthodox monk.

Many of us change careers in our lives, but few have undergone such a radical change as Frère Jean, a fashion photographer-turned-monk. Having swapped photographing catwalks for gardening and prayers, Frère Jean has become an avid chef and the author of Les recettes du monastère (Monastery Recipes), with a sequel cookbook due out next autumn.

As he refills my mug, Frère Jean recounts his early life. The son of an English teacher, he began life as Gérard Gascuel in the very region where he has returned to open his own monastery, Skite Sainte Foy. He gesticulates at the prehistoric landscape of long-extinct volcanoes and Jurassic gorges that greets him each morning from the monastery window. Autumn clouds hang over the valley in wisps. The mist is the same color as his beard.

After studying photography in Paris, Gérard enjoyed an illustrious career as a journalist and fashion photographer for a Japanese magazine. It must have been a surprise to all when at age 33, seemingly overnight, he ditched his man-about-town persona and became a monk.

He was on an assignment in Mount Athos, Greece, when he observed Orthodox monks going about their daily routine. Watching the simplicity of their lifestyle against the backdrop of the cerulean Aegean Sea, he felt as though he had never seen anything so beautiful. Parisian catwalks paled in comparison. He quit his job, broke up with his girlfriend, and headed straight to Athens to be initiated into the Orthodox Church.

Soon after arriving at Mount Athos, Frère Jean was appointed monastery chef. “I was the only Frenchman, so the other monks assumed I could cook,” he says. Inspired by the wealth of fresh flavors (seafood, citrus fruits, thick, vibrant olive oil) and already a food lover (“my mother was a great cook; when I came back from school we’d play a game where I’d sniff the air and try to guess what she was preparing”), he fell in love with cooking. He served up calamari, vegetarian moussakas, and vibrant tomato salads to his brothers.

He always liked a challenge, and life in Greece seemed too idyllic, so he transferred to the Mar Saba Monastery, one of the oldest continuously inhabited monasteries in the world, which resembles a sprawling sandcastle, in the middle of the desert, near Jerusalem.

With very little growing nearby, he adapted his recipes to match his environment. His repertoire expanded to include hummus, beans, and lentils. Eventually, though, returning to the Cévennes was his calling. It was an area that he felt had lost its faith, so he took over an old priory in a state of disrepair and began an ambitious interior design project. Of utmost importance was the monastery garden, and Skite Sainte Foy became almost entirely self-sufficient, with anything that couldn’t be grown on site swapped for home-grown produce.

By his side throughout was Frère Joseph, another Orthodox monk with whom Frère Jean has shared the old priory since its début in 1996. Frère Joseph stops by to say hello, but declines a coffee. He’s quieter and more reserved than Frère John, who is rattling a tray of chili seeds (all deseeded by hand) under my nose.

Thanks to a steady stream of visitors (religious pilgrims, locals, families keen to learn about permaculture and the monastery’s history), Frères Jean and Joseph are far from isolated. Two nuns who live close by are also regular dinner guests.

There are few rules around what they eat. Aside from Lent, Jean and Joseph are not vegan, but meat is rare in their diet. “If one of us is ill or lacking in energy, we’ll eat a little meat,” Frère Jean explains, “but we don’t see the point in killing an animal for a celebration.” Seasonal fruits and vegetables form the basis of every meal, and they never eat, nor harvest, in excess. “We’re not the only ones who need the food,” he says. “With our fruit trees, the top layer is for the birds, the bottom layer for goats, and we take the middle section.”

To me, Gérard Gascuel’s lifestyle as a fashion photographer sounds aspirational—many of us dream of travelling the world and meeting celebrities for a living. But he’s far from the first to make such a drastic life change. History is littered with examples. Dolores Hart, the actress who played Elvis Presley’s love interest in the 1957 film Loving You, became a Benedictine nun at the age of 24. She was playing St Clare of Assisi in Frances of Assisi and seems to have morphed into the role. More recently, Ananda Krishnan, a billionaire and the son of Malaysia’s third richest man, gave up his fortune at the age of 18 to become a Buddhist monk.

Behind the thick cotton-wool beard, black habit and skufia (cap), though, the fashion photographer and the monk live in harmony. Frère Jean acts with artistic flair, animatedly showing me photos of his liturgical robes, or “party clothes.” The bejewelled cream and gold garments are reminiscent of runway models, albeit rather more modest. The theatrics and splendor of his life as a monk surely weighed into Frère Jean’s decision to join the church. With ornately decorated churches and stained glass windows, the Orthodox Church is nothing if not elaborate.

For Frère Jean, gardening and cooking are art too. On the long, wooden dining table sits a fruit bowl, brimming with a bounty of imperfect produce. He grabs an apple and traces the scarlet stripes tattooed on its skin with his finger. It looks as though someone burst a balloon filled with red paint on top of it. Next, a jar of chestnut honey appears. Frère Jean’s presentation feels like a lesson in mindful eating: He encourages me to smell the honey and observe the color before tasting.

“My favourite dish is whatever I’ve grown seasonally and shared with my brothers,” he says mischievously, when I ask. “But I do love a velouté de potimarron [pumpkin soup].”

He dashes back from the kitchen, but what he’s waving wasn’t grown at the monastery. “Marmite!” he smiles. “I had to trade for this, but it’s great for so many recipes. Do you know it?” After my own lengthy pilgrimage to track down Marmite in French supermarkets, I can hardly believe my eyes.

Before I leave, Frère Jean is keen to show me his latest exhibition, displayed along the stone walls of the monastery garden. The collection of still-life photos of the fruits of his labors—a heart-shaped buffalo tomato, a striped apple, a gnarled pumpkin—wouldn’t look out of place in an exhibition at the Rijksmuseum.

“I used the fabric of my habit as a backdrop for the photos!” he says. “Look at the shape of that tomato, isn’t it beautiful?”

What’s So Special About Monk-Made Food?

The enduring appeal of beer, cheesecake, and ferments made at convents and temples.
food

The owner of Alcôa has devoted decades to recovering lost pastries.
food

Why Monks and Nuns Make So Many Beloved Foods

A medley of efforts, and one abbey's monks, may bring back the forgotten fruit.
Video