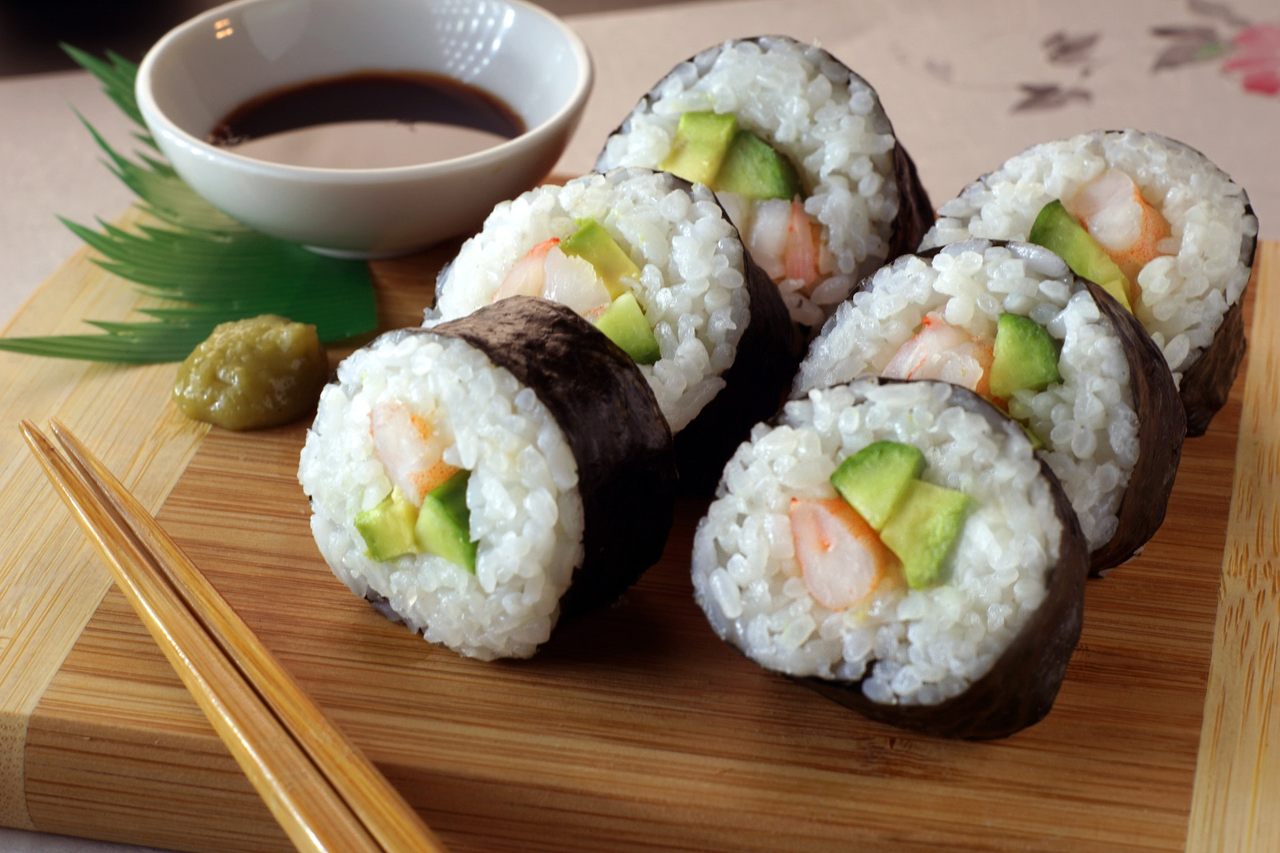 California rolls: Not from Canada? Kasumi Loffler/Pexels
In This Story
Food

Sushi chefs in Toronto are just teasing lovers of actual pizza, but with delicious outcomes.
Food

A unique take on Szechuan dumplings is now a Montreal specialty.
Destination Guide

Consider Hawaiian pizza: The divisive pineapple-and-ham topped pie is viewed as an abomination by many pizza lovers, including the president of Iceland, who once threatened to ban it. Consider, too, boxed mac and cheese. In a world of wonderful noodle dishes, from silky cacio e pepe to ramen served in a rich broth, Americans dump milk and neon-orange cheese powder on a bowl of macaroni and call it dinner. Even sushi, far from its native Japan, can find itself transformed into pan-fried “sushi pizza,” adorned with all manner of sweet and fatty sauces.

Americans have a penchant for unhealthy, processed foods and a tendency to turn other cultures’ cuisines into dishes occasionally decried as crimes against cuisine. But none of the above examples were invented in the United States. Hawaiian pizza hails not from Honolulu, but from Chatham, Ontario. Chef Kaoru Ohsada created the first sushi pizza in Toronto. Even instant macaroni and cheese has roots in Canada, and Canadians eat three times as much of the cheesy noodles compared to their cousins to the south.

“We have kind of adopted it as our own,” says Canadian food writer Gabby Peyton of The Food Girl in Town. “It’s more ubiquitous in Canada, for sure.”

These are just some of the culinary creations for which Canada deserves—depending on your perspective—to be either lauded or maligned. Instead, eaters largely assume they are American. Why is that?

Food historian Ian Mosby of Ryerson University points to the fact that “the U.S. is a cultural monolith, even in Canada.” The two countries share a language, and 90 percent of Canadians live within 100 miles of the U.S. border, contributing to shared cultural influences across both countries. “We eat the same kinds of fast foods as our American neighbors,” says Mosby. “It’s very hard to disentangle what constitutes Canadian culture and American culture at this point.”

To wit, aside from poutine and maple syrup, many diners have a hard time attributing foods and dishes to Canada. Given the association of processed, unhealthy food with the aptly named “SAD,” or Standard American Diet, it’s perhaps not surprising that Canadian innovations such as processed mashed potatoes (developed in Ottawa in 1960) or processed cheese (arguably invented in 1892 in Ingersoll) are often assumed to be American. This is further compounded by Canada’s depiction as a utopia—despite Canadians’ own occasional assertions that these overly optimistic views of Canada are “mooseshit.”

“We kind of have a world perspective, not just about our food, but about how clean and nature-filled Canada is,” says Peyton. There’s no place in that utopia for the highest per-capita doughnut consumption on earth, even though Canada beats out America for that honor.

But Canada has a complex historical and culinary landscape, defined not just by its proximity to the U.S., but by its diversity. Following decades of global immigration, in 1971, Canada became the world’s first country to enact an official policy of multiculturalism. Today, immigrants represent more than 20 percent of Canada’s population, which is more than any other G8 country.

So while America tells its immigrant story more loudly, Canadian immigrants are quietly responsible for many new dishes associated with the United States. In British Columbia, Chinese food buffets got their start when Chinese railway workers prepared mass quantities of their favorite dishes to share with Scandinavian loggers, in line with their concept of smorgasbord. While it’s challenging to say whether the Canadian version inspired Chinese buffets in the United States and elsewhere, Canadian-Chinese food (think Newfoundland chow mein, peanut butter dumplings, and more) is as rich a category as American-Chinese food, and Montreal’s Bill Wong certainly became one of the pioneers of all-you-can-eat Chinese food offerings as we know it.

The popularity of Chinese food in Canada also inspired Sam Panopoulos, a Greek immigrant in Ontario, to invent Hawaiian pizza. In a nod to the Tiki culture sweeping North America, and taking inspiration from the sweet-and-savory flavors of Chinese cuisine, Panopoulos tossed canned pineapple on pizza, and the world’s most divisive pie was born. (This is equally true in its birthplace—about a quarter of Canadians dub it “blasphemy,” according to a 2018 survey by Abacus Data.)

Hawaiian pizza is not the only dish with an American name but roots in Canada. To hear Osaka native Chef Tojo tell it, he created the California Roll in Vancouver in the ‘70s to introduce sushi to diners averse to raw fish and seaweed. Tojo’s dish did away with the former in favor of crab and hid the latter by turning the roll inside out, winning over North Americans. And despite arguments to the contrary, its name, according to Janis Thiessen of the University of Winnipeg, is likely due not to its purported place of invention, but rather to the association between avocados and California (much as Hawaii’s pineapples lent their name to Panopoulos’s pizza).

Another reason Canada never manages to lay claim to its many innovations—not just instant mashed potatoes and processed cheese, but egg cartons, garbage bags, and vortex flush toilets? That famous Canadian humbleness, or what Peyton dubs an “inferiority complex” vis à vis of Americans, which leads them to accept American appropriation of their innovations.

In 1884, Montreal’s Marcellus Gilmore Edison was the first to develop a recipe for one all-American classic: peanut butter, which he developed as a means of providing quality protein to elderly people less able to chew. “Kellogg just jumped all over it,” says Peyton. “In certain instances, Canadians kind of invented things and then Americans just said, ‘OK, I’m just going to patent that and that’s going to be mine now.’”

Mosby points out that the same story plays out with blue-box mac. “The inventor of Kraft processed cheese was born in Canada,” says Mosby. “But I think that’s sort of a Canadian story: He goes to the U.S. to succeed.” As a neighbor to such a large, wealthy country, it’s somewhat inevitable that Canadian innovations are rushed to the American market.

There’s something to be said, though, for Canada’s quiet innovation and local pride. Canada is, after all, home to a few uniquely Canadian fusion foods, such as the Halifax donair, a sandwich invented in the 1960s by Greek immigrants who substituted doner kebab’s lamb for beef and swapped out the yogurt-based tzatziki for a slightly sweetened sauce made with evaporated milk. Canada is also home to the Bloody Caesar, a northern answer to the Bloody Mary made with clamato instead of tomato juice.

Ketchup chips are yet another item ubiquitous in Canada but almost impossible to find in the United States, despite ketchup being one of America’s favorite condiments (found in 97 percent of American households, according to the Boston Globe). In her book, Snacks: A Canadian Food History, Thiessen attributes this discrepancy to a Canadian penchant for anything vinegar-based.

“These differences may be the result of the British tradition in Canada of using vinegar on French fries,” she writes, “a practice not common in the United States.”

“Personally I don’t like them,” says Peyton, “but I feel like a bad Canadian for saying that!”

Fortune cookies emerged from one of America’s darkest moments.
bars

Before your favorite tools, cooking was hell.
Video

The Jewish diaspora shares a menu at this museum café.
Want to see fewer ads? Become a Member.
From Around the Web
Atlas Obscura Trips
Seeking the Mysterious in Winnipeg
View This Trip
Thanks for sharing!