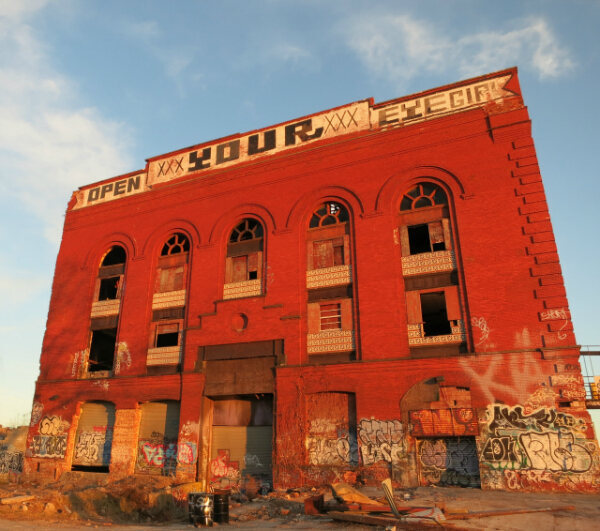 Along the Gowanus Canal’s toxic shores sit the decaying remainders of the Brooklyn Rapid Transit Company’s Central Power Station. The building has been nicknamed “The Batcave”  for the creatures that are said to live in the former power station’s ceiling.

Built in 1896 to serve the initial development of public transportation in the outer boroughs, the 180-foot power plant originally housed an arsenal of two generators, eight engines, a coal-conveying apparatus capable of moving 125 tons of coal an hour, and had a basement stocked with tens of 100 foot boilers, all fueling the eight 4,000 horsepower steam engine generators. It was a coal-powered giant with huge smokestacks, ornately carved stairs, and the best view in Brooklyn. Due to dated technology, the station eventually fell behind the times, and after a brief resurrection as a paper recycling plant it was left to rot on its noxious soil. Today considered one of the most contaminated bodies of water in the nation and officially designated as a brownfield, the Batcave’s stretch of Gowanus had previously been used as a paper mill, lumberyard, garage with gasoline storage tanks, auto repair shop, iron junkyard, and a sulphur works.

The building’s history during the 20th century is vague, but in the early 2000s the decrepit industrial hulk became home to a massive community of teenage runaways from across the country—dozens of kids from Queens, Long Island, California, and various Midwestern states. A rare article on the Batcave from the Daily News in 2006 documented the feelings of residents: “It’s like a dorm,” said Sasha, 18, a runaway from her home in Long Island City. Anton Green, a security guard at the neighboring Verizon truck depot, commented that the kids looked harmless and waved to him when they passed: “They look like they’re punk rockers—Mohawks, army bags, hoodies. They seem real nice, well-mannered.” 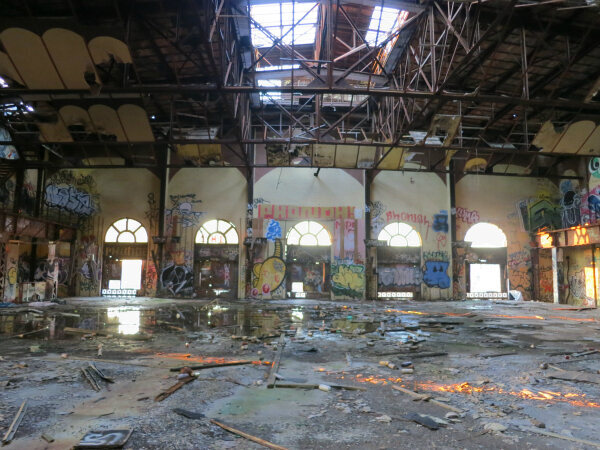 Allegedly the settlement began peacefully, governed by a few “guardians” who kept hard drugs and violence out of the colony through an “anti-junkie law.” There was even a communal bike shop where broken bikes were stripped for parts and hung from the ceiling. Then came a drunken rooftop incident where rocks were thrown at passing cars, and the police attempted their first eviction of the squatters, arresting the “guardians” and leaving the rest of the youths to self-govern. During 2004 and 2005 the settlement quickly devolved into heroine use and drug-induced violence. A homeless man was thrown through a window to his death, and one overdosing resident was carted to the street in a wheelchair for the authorities to deal with. Reporter Jotham Sederstrom with the Daily News interviewed two twenty-somethings on their daily routine as they mainlined heroin outside the building. “I wake up around 11, go to lower Manhattan to panhandle, drink too much, get fucked up on drugs and go back to the Batcave,” said Straps, 23, who’d run away from her Suffolk County home four years prior.

By late 2006 photos of the labyrinthine building had surfaced online, serving as accidental publicity for the Batcave, bringing in heavier drug abusers and urban tourists. “I’m kinda sad that that building is on the map now,” said one resident in commenting on a photo on Flickr, nostalgically recalling the early 2000s, “For a couple of years, it was my special spot where I could get away from it all, but then it blew up with junkies and runaways from Long Island and scum from Tompkins Square Park.” 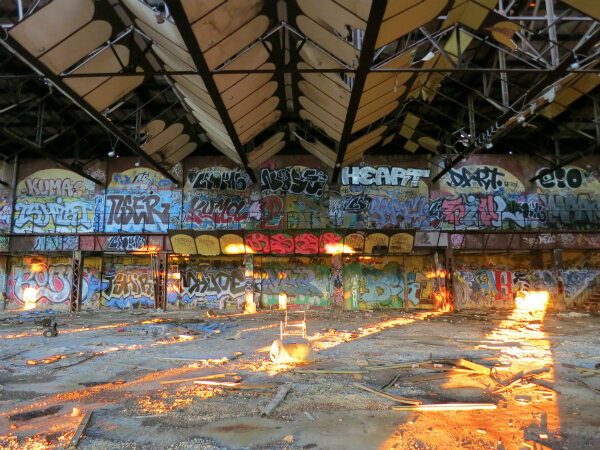 After the release of the 2006 Daily News article, which portrayed the Batcave as a garish street existence for juvenile delinquents and reported the madness taking place in Gowanus, just blocks from some of the wealthiest real estate in Brooklyn, the Batcave gained notoriety. Assemblywoman Joan Millman contacted a homeless outreach group to try to provide the kids with treatment, while frightened community members complained, and eventually the owner had the squatters evicted. The building was sealed off and a guard posted, all in a single raid. At the time, mega-developer Shaya Boymelgreen, planned to redevelop the building into the Gowanus Village, a complex of 350 luxury condos and rental units as well as loft buildings and townhouses on the east bank of the canal. It would have been the first ever large-scale residential development along the industrial zoned canal. 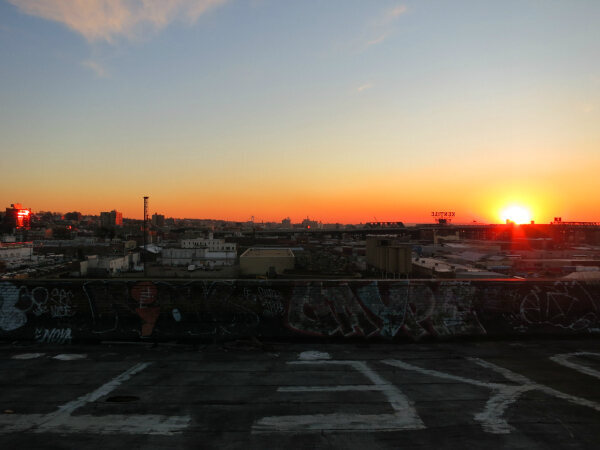 Less than a year later, Boymelgreen split with her investment partner and plans for the Gowanus Village were abandoned, the building put on the market for $27 million. In late 2007, the squatters were long gone and the Batcave once again became a hotspot for urban spelunkers, a Mecca for abandoned tourism. The interior was a dramatic kaleidoscope of grunge, littered with needles, mattresses, and impromptu bedrooms set up in corner offices of the original power plant. Dolls, toys, and mannequins were hung from the ceiling and forgotten in stairwells; witty, but suicidal, poetry scribbled on makeshift walls, and massive graffiti murals decked the entire space, reminders of the rushed eviction. Although no longer a squat, their traces seemed to age slower than the building. While the ceiling crumbled further and saplings grew through the broken windows, a rooftop overhang visible for miles around sported a new politically charged tag every few months. As nature overtook the structure, the internal graffiti somehow failed to fade. 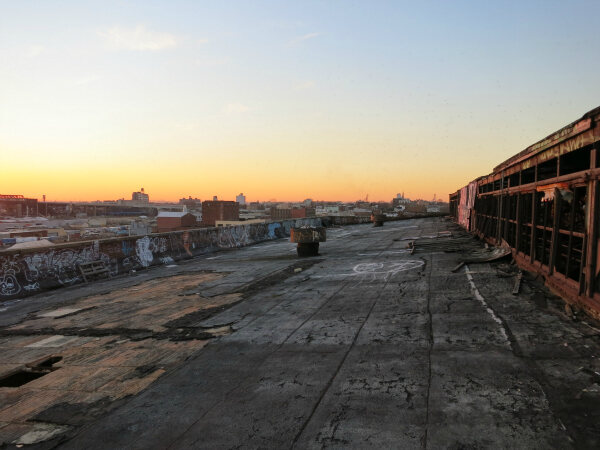 Recently the Batcave changed hands again, bought this time by millionaire Joshua Rechnitz for just $7 million, to be turned into a bicycling velodorome field house and 60 artist studios. The space has been cleared of the heaps of squatter possessions, their bedrooms ransacked back to emptiness, and with neither residents nor engines the massive size of the building’s nakedness becomes even clearer. White coverings on the windows are visible from the elevated G and F train tracks, and much of the graffiti is beginning to be scrubbed away as well. Real estate agents may be baptizing the Batcave, but nothing can scrub away the historical filth of buildings founded on Gowanus water. The Batcave is not just another building being sucked into Brooklyn’s gentrification vortex—both powerhouse and home, this versatile structure’s historical legacy and decrepit but glorious façade certainly sets it apart as one of the toughest, most majestic structures in all Kings County.

All photos by the author.

The Kunstkammer Royal Chamber of Art and Wonders Reopens in Vienna