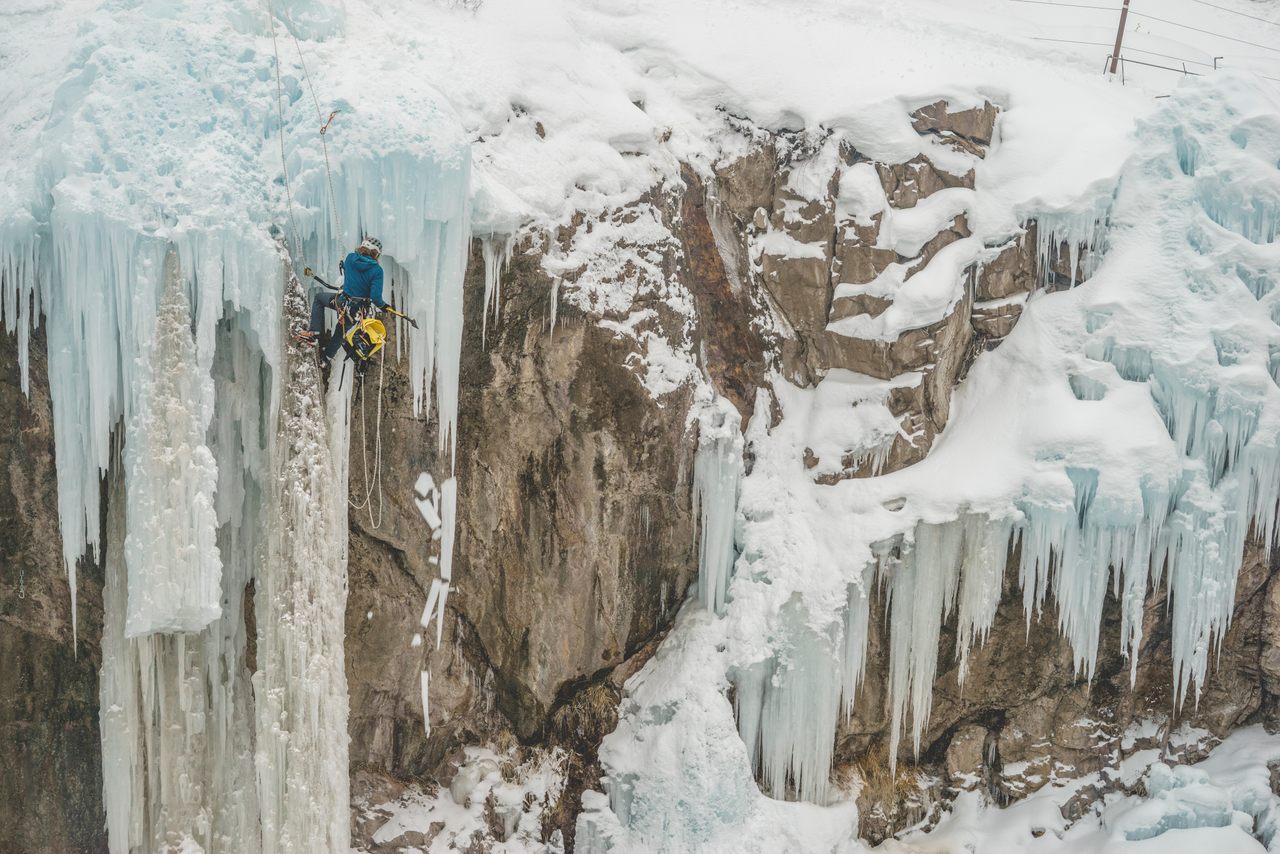 Ice farmers' tasks include "dagger mitigation"—hacking away at icicles that could hurt climbers. Jacob Raab
In This Story
Destination Guide

At 7:30 a.m. on a Monday in January, the sun has yet to climb over the snowy San Juan mountains that stand sentinel around the tiny town of Ouray, Colorado. In the twilight, a pair of climbers bundled in layers, a thermos of hot coffee or tea in their backpacks, make their way to the cold, shady canyon of the so-called Swiss Alps of America, ice tools, ropes and wrenches in hand. These are the ice farmers of the Ouray Ice Park, and they’re checking on the mid-season crop.

‘Ice farmer’ is an odd term, to be sure—it’s typically broccoli, soy beans, and strawberries that are farmed, not ice. But don a helmet and crampons and hike along the cliffs where these farmers cultivate their “fields,” and it’s easy to see how the title is earned.

The farmland is the city-owned Ouray Ice Park, the only one of its kind in the world. It transforms over a mile of the city’s Uncompahgre Gorge, a deep mountain canyon formed by the winding Uncompahgre River. From spring to fall, this picturesque swath features sheer rock faces, diverse vegetation, and a narrow winding river, all of which can be viewed from bridges and trails and boardwalks above the rim. But in winter, farmers direct water onto the walls. They work until the ice freezes solid, creating more than 100 routes along three miles of vertical climbing terrain. Here, the crop doesn’t grow from the ground up, but from the cliffs down.

Some 7,500 feet of gravity-fed pipe runs water from the town’s supply tanks a quarter-mile away—sourced from Weehawken Springs—down the length of the ice park. No pumps, no electricity, just tough four-inch PVC pipe, the irrigation system the farmers must maintain and adjust on a daily basis so that every drop nourishes the crop, coats the cliffs, and freezes into solid walls of ice. Daily, the farmers are responsible for the system’s and the crop’s care—pipes, wall, and all.

Work begins every November. Five days a week for a month and a half, the ice farmers fix pipes that broke over the summer, replace safety anchors, clear small bushes and patches of grass from the cliffs, build chains into the wall to help support pillars of solid ice, and run water over the rock. At first, it’s slow going: To farm layers of ice solid enough to safely climb, the air temperature must hold between 12 and 28 degrees Fahrenheit for two weeks straight. But the regular showers help cool the cliff’s thermal mass to encourage a solid bond between ice and rock when the temperature eventually cooperates.

Like with traditional farming, humans are at the mercy of nature. “At the end of the day, our primary objective is to make ice—as much ice as we possibly can with the temps and water we are given,” says Lucas Carrion, an ice farmer who’s worked at the park for five seasons. “But it’s obviously largely Mother Nature who does most of the work.”

Typically, the crop has grown and matured—meaning the ice is thick and frozen solid—by sometime in December. But that’s not where an ice farmer’s job ends. When the ice climbing season starts in earnest, two ice farmers (all five are men this season) meet daily on the bridge over Box Cañon. One walks the narrow paths to the northernmost terminus of the park, and the other works his way in the opposite direction. The farmers stomp fresh tracks in the snow, the spikes of their crampons digging in, as they close water valves along the pipe.

They often carry a level to ensure there aren’t any dips and low points where water can collect, freeze, and potentially burst the pipe. When a farmer encounters a broken valve or cracked pipe, they fix it. They adjust some 250 sprayer heads so that the water is directed toward areas that are most in need of replenishment.

When it snows, the farmers rappel from the top of the wall to shovel away the powder, focusing on low-angle slopes where the powder has accumulated. Many crew members find this task tedious, but it’s crucial: When water freezes over snow, it creates a crusty shell of ice that makes for bad climbing and can endanger climbers below if large chunks slough off and crash.

Then it’s on to “dagger mitigation,” which involves removing the stalactite-esque icicles that can be perilous to climbers. A dagger has to go if it’s too small to climb on but large enough to hurt someone if it falls. An electric chainsaw makes precise cuts and quick work of the task.

The ice farmers’ work continues as climbers find their lines and send their routes in the Schoolroom, Southpark, or Five Fingers areas of the park. The crew ensures that snowy footpaths are passable, that safety ropes and guides are in place on narrow traverses and icy natural stairs that lead down into the canyon, and that ropes aren’t rubbing against the pipe.

And at 4 p.m., when the park closes, the ice farmers turn the water on so it can continue nurturing their crop overnight, when it’s colder. Depending on temperature, humidity, and wind, the crew will manipulate the droplets coming from the sprayer heads: misty on warmer nights, heavy drops in windy conditions, a steady flow to keep water moving through the pipes and down the walls in extreme cold. “It’s a fine-tuned science,” Carrion says. “We are constantly solving problems that allow us to keep the water flowing and making the ice,” adds Tres Barbatelli, who’s been farming ice at the park for two years.

Without the farmers, there would be nothing to climb come winter, and Ouray would be a ghost town: The park accounts for 60 percent of the town’s economy every winter. It’s the soul of the place, and most area businesses wouldn’t survive without it. “The ice farmers have a huge responsibility,” says Peter O’Neil, executive director of the Ouray Ice Park. “The community depends on them.”

And it will continue to depend on the farmers until April 1, when the park closes for the season and the ice farmers turn off the water for the summer. They disassemble a few sections of pipe and anchor systems to remove obstructions and manmade equipment for summer hikers, and store it for the next fall, when the magic of the winter climbing season begins anew and the ice farmers of Ouray return to tend their crop.

How a Village United to Save Cinque Terre's Ancient Terraces

The secret of the slide, from ancient Germanic tribes to tony Alpine resorts.
sports

For hundreds of years, sailors have zipped across frozen lakes and rivers—but now chances are fewer and farther between.
sports

People gather every winter at this Maine museum to take part in the age-old process of harvesting ice from a frozen pond.
Sponsored by GoUSA TV
Video • Wonder From Home