The Trek to Bid Farewell to an Icelandic Glacier - Atlas Obscura
Want to see fewer ads? Become a Member. 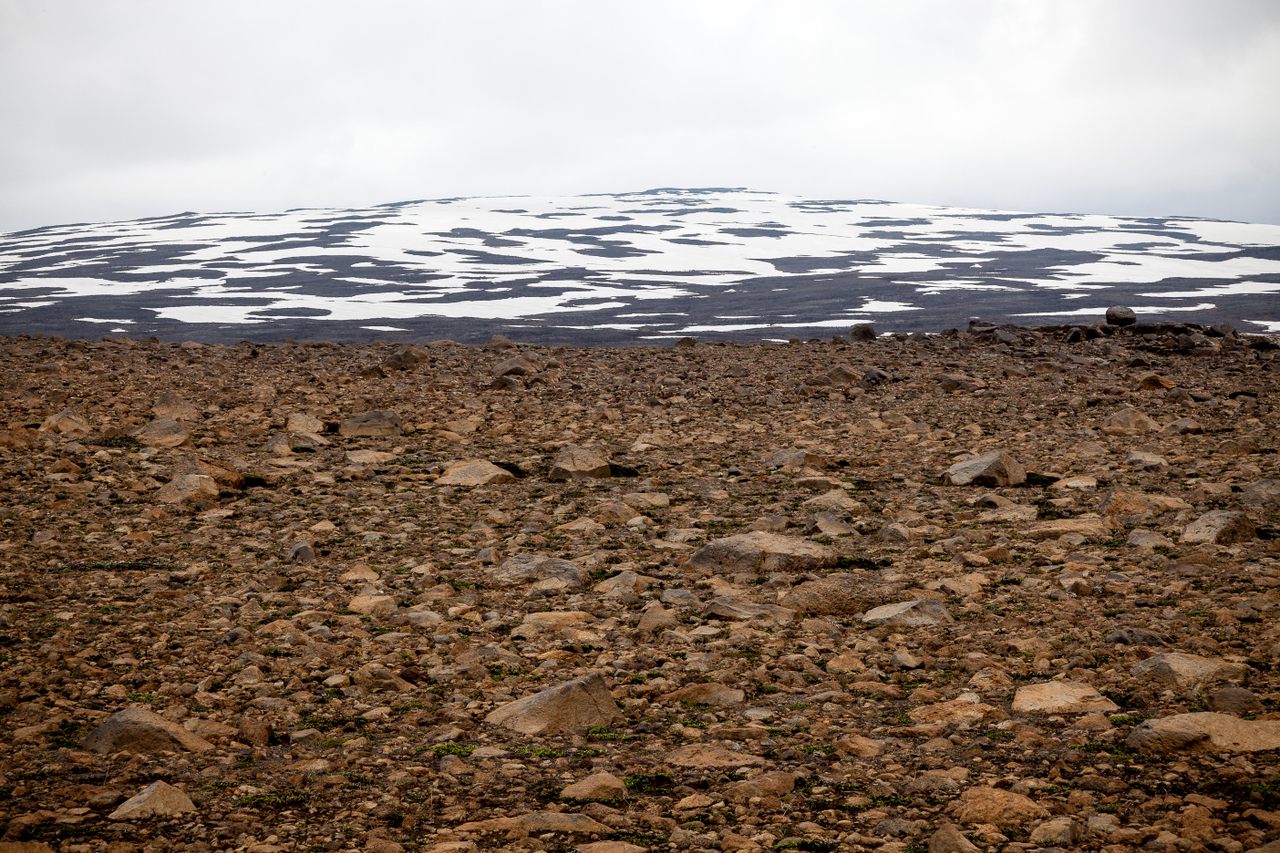 The volcano known as Ok is now down a glacier. Photogenic/Alamy Stock Photo
In This Story
Destination Guide

Many Icelandic excursions send visitors scrambling or snowmobiling around glaciers. But one tour on the Nordic island-nation imagines something more melancholy: not a trek to enjoy a glacier, but a march to mourn the absence of one.

In August 2019, participants on the Un-Glacier Tour will hold a funeral of sorts for Okjökull, a glacier that once hugged a snow-stuffed crater on Ok, a volcano in west-central Iceland. Participants will tramp up the mountain’s pebbled slope and install a plaque that eulogizes the vanished glacier—and bleats a warning about the others at risk in a warming world.

Creaking and in constant motion, with stripes of rock and dirt offering tangible proof of their path over land, glaciers can feel nearly alive. They smell earthy and mineral, and to describe their anatomy, scientists use terms like “snout” and “tongue”—almost “as though they are creatures,” says Cymene Howe, an anthropologist at Rice University who studies the cultural, social, and political fallout of disappearing ice.

But nothing lives forever, and glaciers, too, are going to their graves. That includes Okjökull.

For a mass to be considered a glacier, “there needs to be enough ice that it’s deforming under its own weight,” says Twila Moon, a research scientist at the National Snow and Ice Data Center. An active mountain glacier accumulates snow and ice; then, as pressure builds, the ice flows slowly, and the whole thing moseys downhill. When melt outpaces accumulation, a glacier retreats. When it shrinks so much that there’s nothing left to move, it’s called other things—a snow field, for instance, or “dead ice.” But at that point it’s no longer a glacier.

At first, it can be hard to tell that a glacier has died. “Usually it is almost impossible to identify the exact time when a glacier ceases to be,” says Oddur Sigurðsson, a glaciologist with the Icelandic Meteorological Office who declared Okjökull officially dead in 2014. Immediately postmortem, a glacier “is probably not going to look too different” than it did in life, Moon says. (It may, for instance, still be studded with the rocks and debris it acquired as it moved along the ground.)

And it would have been easy for Okjökull to have slipped quietly and unceremoniously into the night. Even when it was a glacier, Okjökull was relatively small—a map from the early 20th century shows it spanning a little more than five square miles—and it has since shrunk significantly. As of 2017, the frozen patch was smaller than a half-mile square, according to a report from the University of Iceland.

But Howe, Sigurðsson, and other collaborators are memorializing Okjökull with a degree of pomp and somber circumstance, in service of telling a bigger story about climate change.

On the Un-Glacier Tour, Sigurðsson, Howe, fellow Rice anthropologist Dominic Boyer, and the Icelandic writer Andri Snær Magnason will mount a copper plaque on Ok, on a stone at an elevation of roughly 3,654 feet (the coordinates, Howe says, are N 64°35.498’ W 020°52.253’).

The plaque, written in English and Icelandic, is both homage and warning. It notes that Okjökull vanished, and that in “the next 200 years, all our glaciers are expected to follow the same path.”

The placard also bears a message to future readers: “This monument is to acknowledge that we know what is happening and what needs to be done,” it reads, speaking to an imagined witness who comes across the marker months, years, or centuries from now.

The inscription also includes the month and year and “415 ppm CO2”—the amount of carbon dioxide recorded in the atmosphere in May 2019 at the Mauna Loa Observatory in Hawaiʻi. It’s the most recent measurement published from that site, and researchers think it’s the highest concentration in the last 800,000 years, CNN reported. Meanwhile, factoring in averages from around the world, June 2019 was the hottest June on record, according to data from NASA and the National Oceanic and Atmospheric Administration.

The text on the plaque is Magnason’s. “We wanted the words to come from an Icelander, given that glaciers are an important part of their cultural and natural heritage,” Howe says. “Andri was perfect because he has been working on environmental issues for many years and is also a poet and author.”

Magnason’s words are meant to spur both mourning and mobilization, says Howe, “to encourage people to action.” The whole Un-Glacier Tour concept, Howe adds, is “a play on [adventure tourism], an ironic twist … that is meant to draw attention to what is occurring, not only in Iceland but globally as glaciers and ice sheets are transformed.”

The stone on Ok that Howe and the team chose for the marker struck them as the perfect place because it’s flanked by other rocks “that serve as natural benches for weary humans,” Howe says. In a warming world—where homes and communities will be swallowed by water, where temperatures will soar, where crops will struggle and diseases will spread—humans will be plenty weary, whether or not their limbs are aching from clambering up an Icelandic volcano.

As glaciers continue to melt away, we also run the risk of never again standing next to something frozen, ancient, and giant. “Nearness to a glacier is a nearness to a dry cold,” Howe says. “Rather otherworldly, I’d say.” Eventually, it could be an experience the world has lost forever.

5:11
Want to see fewer ads? Become a Member.
From Around the Web
Atlas Obscura Trips
Iceland in Winter: Natural Wonders & Ancient Legends
View This Trip
Thanks for sharing!