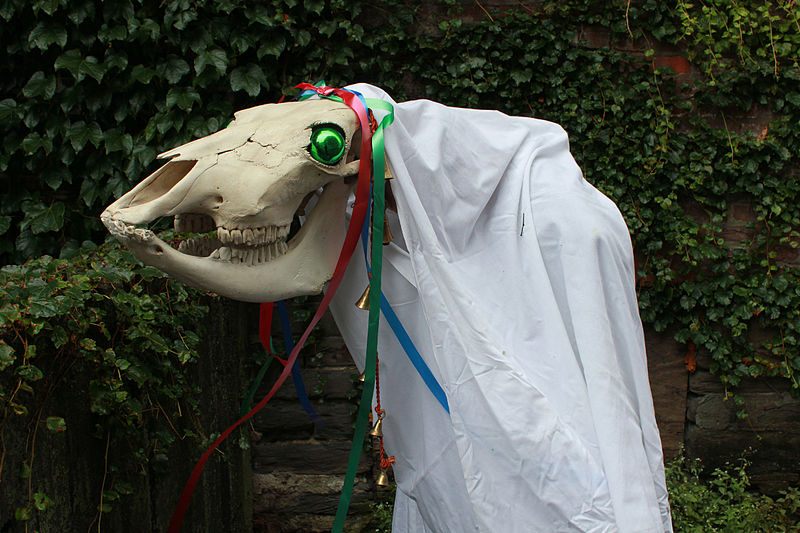 Christmas creatures are all the rage. From the Alpine Krampus tradition to Iceland’s Yule Lads, there’s no shortage of fascinating anti-Santas hiding out there in the world. One seasonal specimen that’s more likely to inspire nightmares than visions of sugar plums is the Mari Lwyd of South Wales, a festive, skeletal horse spirit with a penchant for rhymes.

In the simplest terms, the Mari Lwyd custom involves a group of revelers carrying a horse skull door to door and demanding entry through song. The focus is on the Mari Lwyd itself, a jaw-articulated equine skull decorated with ribbons, ornaments, and festive bits and bobs, plus a sheet draped over the person carrying it, giving the whole thing a ghostly appearance. Mari Lwyd caroling generally takes place around Christmas and New Year’s, though sometimes also in mid-summer or Halloween.

Traditionally, when arriving at a house, a Mari Lwyd troupe will sing out a challenge to the people inside before performing a sort of call-and-response called a “pwnco.” Anyone inside the house is then tasked with replying in a rhyme scheme even wittier than the creature’s. After the rhyme battle, the Mari Lwyd is allowed inside, where the players are given food and drink before heading out to darken someone else’s doorstep.

While the exact origins of the tradition are unclear, like the Krampus, the Mari Lwyd seems to have its roots in pre-Christian, pagan tradition. In an article over at Hyperallergic, Allison Meier points out that the spectral horse figure has also been linked with other “white horse” imagery found in U.K. culture, including the medieval Welsh literary figure Rhiannon. And while the Mari Lwyd is a tradition unique to Wales, the veneration of a domesticated animal—and the horse in particular—as a mythic symbol can of course found all over the globe.

The name Mari Lwyd is sometimes considered to mean “gray mare,” although another translation of the name, which can be found on the website of the National Museum of Wales, is “Holy Mary.” The explanation behind this latter translation correlates the festival with a Christian attempt to appropriate the local custom in the regions it was practiced.

While the true origins of the custom are clouded by time, it has survived sporadically since at least the 1800s, despite backlash against its pagan roots and its booze-soaked reputation. The rough outline of the tradition remains intact, though its modern display has changed over time and can depend on the town. In the village of Llangynwyd, for instance, where the Mari Lwyd is brought out around New Year’s, revelers tend to visit pubs as well as houses and stop to harass passersby on the street.

In general there is often a roguish, merry air to the whole undertaking, and the legend of the Mari Lwyd is highly adaptable. In a 2013 video put out by Music Traditions Wales, an organization that has worked to keep the custom alive by creating flat-pack artificial Mari Lwyds for anyone who doesn’t have a horse’s skull, one man recalls his father warning that the Mari Lwyd would take him away if he misbehaved.

Even if you aren’t in Wales, there’s no time like the present to mix up your Christmas traditions and make a Mari Lwyd of your very own. You don’t even have to use a real horse skull. You’ll be helping to keep a Welsh tradition alive, plus possibly freaking out your neighbors.

Once a colonial tradition, a creative festival has been elevated to new heights.
music

Or maybe it was the cigars that gave us this New Year's Eve staple.
holidays

Puzzle Monday: Ring It In Crossword

1:50
Want to see fewer ads? Become a Member.
From Around the Web
THE GASTRO OBSCURA BOOK
Taste the World!
An eye-opening journey through the history, culture, and places of the culinary world. Order Now