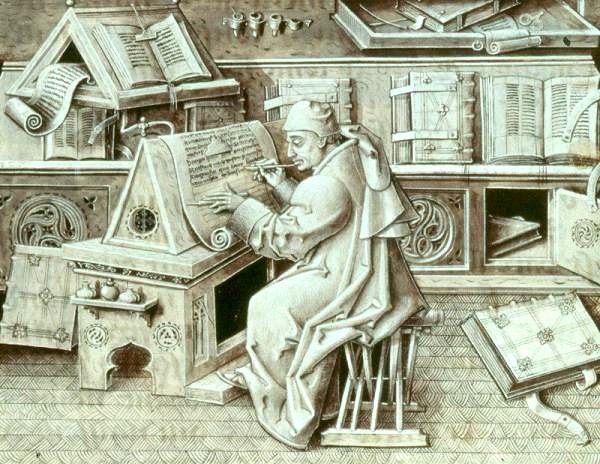 In the Middle Ages, creating a book could take years. A scribe would bend over his copy table, illuminated only by natural light—candles were too big a risk to the books—and spend hours each day forming letters, by hand, careful never to make an error. To be a copyist, wrote one scribe, was painful: “It extinguishes the light from the eyes, it bends the back, it crushes the viscera and the ribs, it brings forth pain to the kidneys, and weariness to the whole body.”

They did not hesitate to use the worst punishments they knew—excommunication from the church and horrible, painful death. Steal a book, and you might be cleft by a demon sword, forced to sacrifice your hands, have your eyes gouged out, or end in the “fires of hell and brimstone.”

“These curses were the only things that protected the books,” says Marc Drogin, author of Anathema! Medieval Scribes and the History of Book Curses. “Luckily, it was in a time where people believed in them. If you ripped out a page, you were going to die in agony. You didn’t want to take the chance.”

Drogin’s book, published in 1983, is the most thorough compendium of book curses ever compiled. A cartoonist and business card designer, Drogin had taken an adult-education class in Gothic letters and became entranced with medieval calligraphy. While researching his first book, he came across a short book curse; as he found more and more, hidden in footnotes of history books written in the 19th century, his collection grew to include curses from ancient Greece and the library of Babylon, up to the Renaissance.

To those historians, the curses were curiosities, but to Drogin they were evidence of just how valuable books were to medieval scribes and scholars, at a time when even the most elite institutions might have libraries of only a few dozen books.

The curse of excommunication—anathema—could be simple. Drogin found many examples of short curses that made quick work of this ultimate threat. For example: “Si quis furetur, / Anathematis ense necetur.” (“May the sword of anathema slay, / If anyone steals this book away.”)

If a scribe really wanted to get serious, he might threaten “anathema-maranatha“—maranatha indicating “Our Lord has Come” and serving as an intensifier to the basic threat of excommunication. But the curses could also be much, much more elaborate. “The best threat is one that really lets you know, in specific detail, what physical anguish is all about. The more creative the scribe, the more delicate the detail,” Drogin wrote. A scribe might imagine a terrible death for the thief: “If anyone take away this book, let him die the death; let him be fried in a pan; let the falling sickness and fever size him; let him be broken on the wheel, and hanged. Amen.”

Or even more detailed: “For him that stealeth, or borroweth and returneth not, this book from its owner, let it change into a serpent in his hand & rend him. Let him be struck with palsy & all his members blasted. Let him languish in pain crying aloud for mercy, & let there be no surcease to his agony till he sing in dissolution. Let bookworms gnaw his entrails in token of the Worm that dieth not, & when at last he goeth to his final punishment, let the flames of Hell consume him for ever.”

Drogin’s book had dozens of such curses in it, and he had collected at least a dozen more to include in the second edition, which was never published. Inside his copy of the book, he still has a baggie of antique file cards, full of book curses.

As Drogin collected curses, he started to find repeats. Not all scribes were creative enough to write their own curses. If you’re looking for a good, solid book curse, one that will serve in all sorts of situations, try this popular one out. It covers lots of bases, and while it’s not quite as threatening as bookworms gnawing at entrails, it’ll get the job done: “May whoever steals or alienates this book, or mutilates it, be cut off from the body of the church and held as a thing accursed.”

Want to Transcribe Rare Magical Manuscripts on Your Lunch Break?

Copies of the 16 explicit paintings were turned into a booklet that circulated throughout the continent.
churches

The First Woman to Publish a Book in English Lived in One Room, Walled Off From Society

Julian of Norwich wrote "Revelations of Divine Love" based on a series of visions she had in 1373 while isolated in religious observance.
paintings

Maybe it's best to just steer clear of white lighters, medieval books, and Robert the Doll.
Video • Object of Intrigue