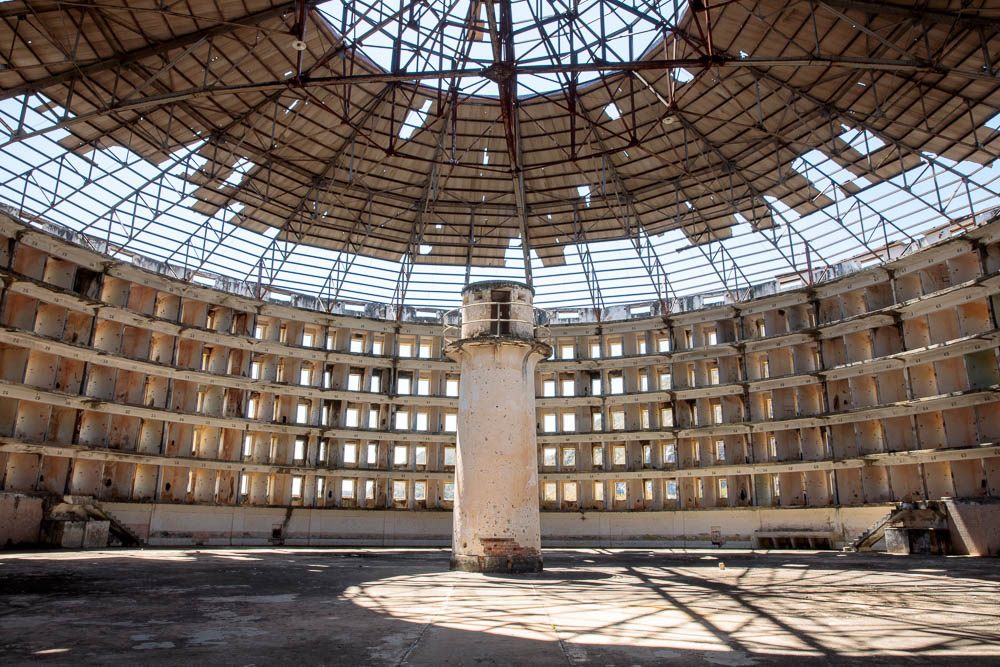 The interior of one of the prison buildings. All Photos: Tod Seelie
In This Story
Destination Guide

Thirty miles off the southern coast of Cuba lies La Isla de la Juventud, the “Isle of Youth.” It is covered in lush vegetation and pine forests, and about half of the island falls under a “special municipality” designation, which prevents access except for those who have the proper permit from the Cuban government. The island is also home to the great ruin of an unusual and historic prison.

Most of the island’s residents are concentrated in Nueva Gerona, a port town on the north coast, which is only reachable by small, infrequent flights and a sometimes-unreliable ferry service. It is a sleepy existence today, but the island has a long and notorious history. It was popular with pirates, and was once known as Treasure Island—made famous by Robert Louis Stevenson. J.M. Barrie is also said to have drawn on accounts of the island when writing Peter Pan.

The island was given its name in 1978 by Fidel Castro (before that it was known as the Isle of the Pines), who had more than a passing acquaintance with it. In 1952, he spent two years there, along with his brother Raul, imprisoned by the regime of Fulgencio Batista after a leading a failed attack on the Moncada Barracks. After the revolution the same prison hosted enemies of the new regime and developed a reputation for overcrowding and harsh treatment.

The prison is called Presidio Modelo, and was modeled after the Stateville Correctional Center, a “panopticon” prison in Crest Hill, Illinois. The panopticon design originated from English philosopher Jeremy Bentham in the late 18th century, based around the idea that inmates are under constant surveillance, or at least are never able to know when they are being watched. In this case, in each building, the cells built in a five-story ring around a single, elevated watchtower. Panopticon prisons were built—but are no longer in use—in Cuba, Portugal, France, the Netherlands, Australia, and the United States. Other correctional facilities inspired by the design have been used all over the world.

Presidio Modelo has been closed for 50 years, following riots and hunger strikes. It is now a national monument and hosts a museum in its old hospital wing. It’s not difficult to visit—once one reaches Nueva Gerona, that is. Four cylindrical prison buildings surround a fifth, which appears to have hosted a mess hall on its top floor. (There are conflicting opinions on whether visitors are allowed to enter the panopticon buildings, but only one is physically closed off.)

From the entrance to the prison complex, long pathways lead to derelict colonial buildings, with the prison structures beyond. A hot wind seems to dampen surrounding sounds, except for the sharp creaks of metal roof panels peeling away from the structure high above. Small plants spring from cracks in the concrete and the edges of a few sun-drenched ledges. On rare occasions, a local person passes through the prison grounds—without ever looking up or acknowledging the looming, abandoned buildings.

It's Really, Really Hot in the Southwest United States

In some cities, temperatures may breach 120°F this week.
prisonsvisual

A former Soviet labor camp is now partially flooded, like an island in the middle of a lake.
military history

After many a misadventure, his warplane is on display today.
animals

To Save a Rare Cuban Bat, Biologists Conducted a Census by Pedicure

As Havana prepares to celebrate 500 years as the country’s capital, the 109-year-old site is coming back to life.
Want to see fewer ads? Become a Member.
From Around the Web
THE GASTRO OBSCURA BOOK
Taste the World!
An eye-opening journey through the history, culture, and places of the culinary world. Order Now