In the Pyrenees Mountains, It’s Bears vs. Sheep vs. Humans - Atlas Obscura
Want to see fewer ads? Become a Member. 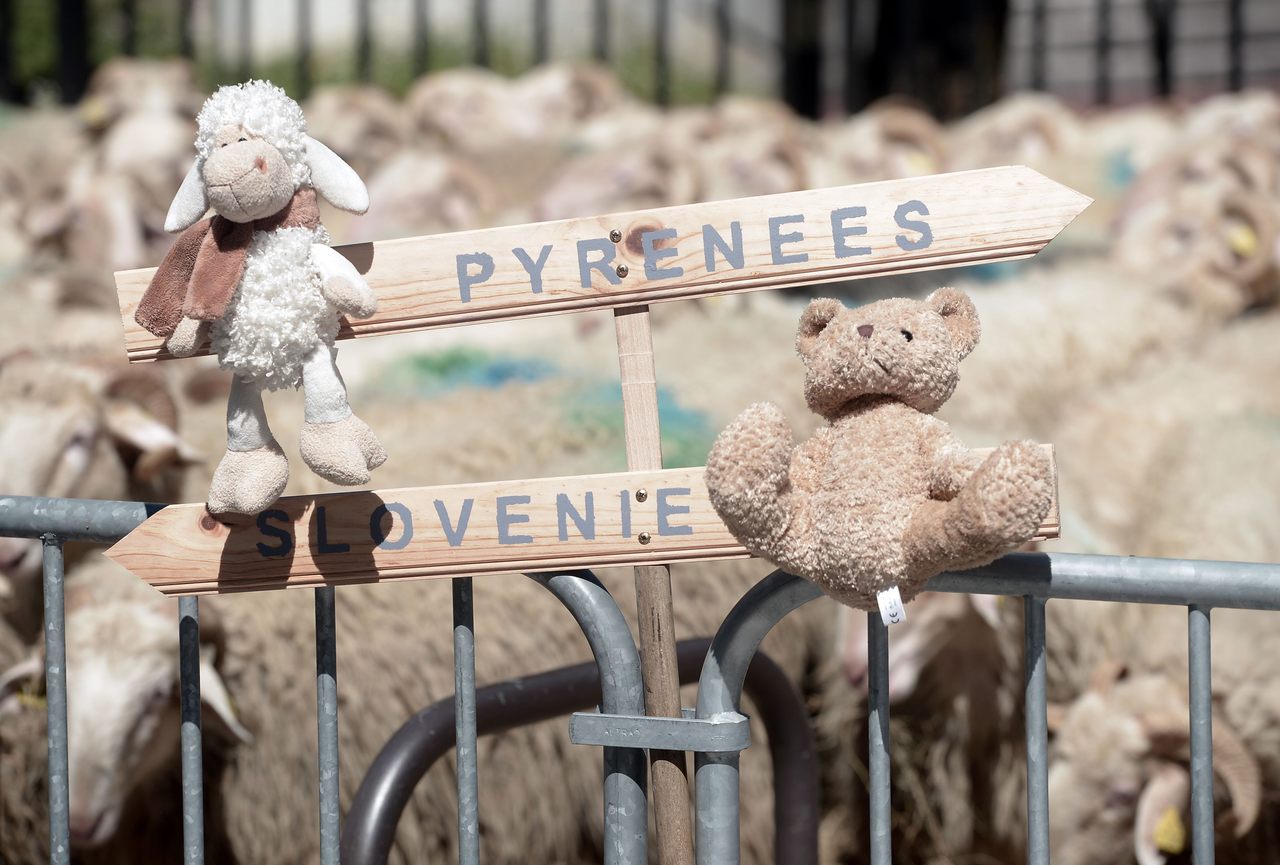 A sheep and a bear square off in a 2018 protest in France. IROZ GAIZKA/AFP/Getty

This summer, a brown bear named Claverina has been the talk of the Pyrenees, the mountains that form a natural border between Spain and France. She has been busy, killing eight sheep on the Spanish side of the mountain range. Along the way, Claverina has stoked the fires of a decades-old European debate about shepherds and bears, as well as the people and parties that seek to protect the bears, Phys reported last month. And while the answer might seem simple—stop bears from killing sheep—the reality is much more complicated.

The Pyrenees aren’t really facing a conflict between people and bears, says Guillaume Chapron, a wildlife ecologist at Swedish University of Agricultural Sciences who studies human relationships with large carnivores. The conflict is between people who do not tolerate the bears and other people who want to conserve them. The issue is local, Chapron says, but it has global implications. “As soon as we have some species that some people don’t want to preserve and we let those species go extinct, we accelerate the biodiversity crisis,” he says. “That means preserving brown bears even if that makes some people unhappy.”

Hence Claverina. Eurasian brown bears remain common in Northern Europe and Russia, but in the Pyrenees they were hunted nearly to extinction in the 1990s, according to The New York Times. So last October, an anesthetized Claverina and another female bear, Sorita, were helicoptered in from Slovenia as the most recent reintroduction of wild bears to the Pyrenees. It was the latest in a string of French-led reintroductions over the last 20 years. Recent estimates suggest the Pyrenees support a population of around 40 to 50 bears, compared to Slovenia’s booming population of over 500.

After their release, the bears wear tracking devices so conservationists can monitor where they go and what, if anything, they attack. Claverina is the more adventurous of the two, while Sorita stayed on the French side of the mountains and gave birth to two cubs, the BBC reported. Angry farmers staged a protest in August with signs that read “Bears, the ruin of the rural world,” Phys reported. According to Chapron, this contingent is “small but very vocal.”

France has a legal obligation to protect the bears because of the European Union Habitats Directive, Chapron goes on. Bear hunting has been illegal since 1962, putting shepherds in a bit of a bind. There is only so much they can do to protect their flock from prowling bears, as acquiring additional fences and guards (both human and mastiff) gets expensive. The bears are omnivores by nature, feeding mostly on roots, fruits, or various prey, Chapron says. But dry summers leave the bears with scant options to build up fat sources for hibernation, which may be why Claverina went after the sheep.

More often than not, though, the bears are not harming sheep by devouring them. In June, more than 250 sheep died after running from a bear and over the edge of a cliff, according to Phys. As of August 22, more than 600 sheep have died, mostly as a result of similarly ill-fated cliff escapes, Phys reports. (Exit, one might say, pursued by a bear). The deaths over the past two years have increased “exponentially,” sheep farmer Olivier Maurin told Radio France Internationale.

The French government, which compensates farmers who lose sheep to bears, recommends keeping sheep locked up in pens overnight. But farmers say this compensation is not enough, and locking up the sheep would put an end to the herds’ traditional summer migration across mountain pastures.

Chapron sees an inconsistency between France’s reluctance to protect its brown bears and the high conservation standards the country calls for other countries, such as Zimbabwe, Botswana, and Mozambique. In 2015, for example, France banned the import of lion hunt trophies in an attempt to stanch poaching in Zimbabwe. In those countries, humans live alongside carnivores much more dangerous to people, such as lions and leopards. “France is the fifth economic power in the world, but it is not able to live with 40 brown bears?” he says.

According to Chapron, the largest threats to Europe’s shepherds are economic, not ursine. In the 1980s, France tried to protect its sheep farming industry with boycotts of lamb imported from New Zealand. But after the French secret service sank Greenpeace’s ship Rainbow Warrior in New Zealand, which had planned on protesting French nuclear tests in the Mururoa Atoll, the United Nations ordered France not to interfere with New Zealand’s trade negotiations. As a result, France had to keep its homegrown sheep farming industry afloat with subsidies, according to a 1986 story in The New York Times.

For now, at least, Claverina isn’t going anywhere. In the eyes of Chapron and other conservationists, the best possible future for farmers, bears, and sheep in the Pyrenees is one of coexistence. It’s a middle ground between resurgence and disappearance. “The notion of coexistence implies some level of conflict,” he says. “The challenge is to make sure that we keep coexisting, and this does not drift toward the eradication of farming or toward the eradication of bears.”

This niche practice was commonplace in North America for centuries.
hunting

Why These Grizzly-Loving Women Entered a Lottery to Hunt Grizzlies

It's all about innovation in sheep-shearing.
art

Kate Jenkins’s delicacies often look better than the real thing.
Want to see fewer ads? Become a Member.
From Around the Web
THE GASTRO OBSCURA BOOK
Taste the World!
An eye-opening journey through the history, culture, and places of the culinary world. Order Now