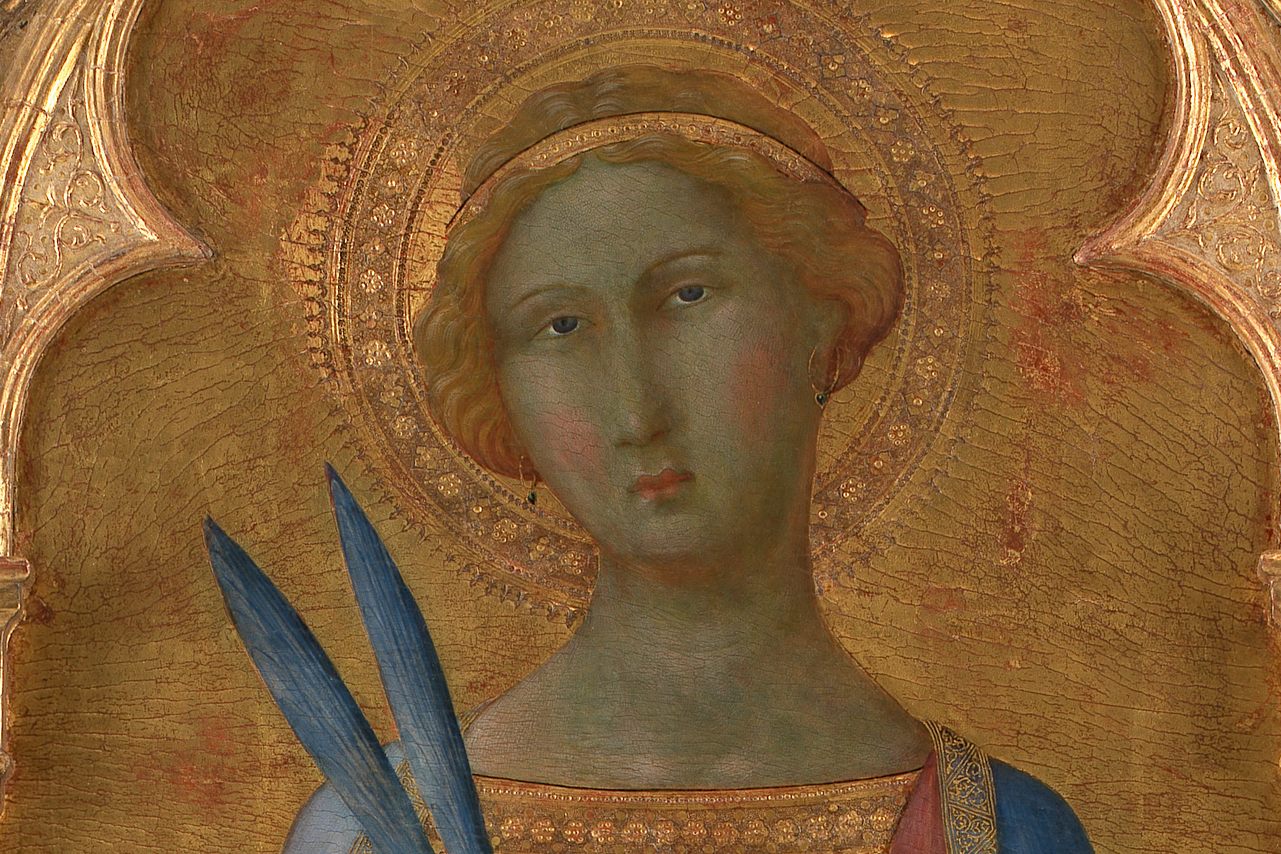 A 14th-century painting of Saint Corona by the Master of Palazzo Venezia Madonna. Wikimedia/Statens Museum for Kunst

Aachen Cathedral in western Germany may be able to claim a special spiritual connection with the global COVID-19/coronavirus crisis: The cathedral, one of Europe’s oldest, is said to house the relics of Saint Corona herself. What’s more, Saint Corona is believed to be the patron saint of protection against plague—depending who you ask, that is.

The cathedral, in fact, had begun renewing its focus on Saint Corona more than a year ago, well before the novel virus had emerged as a public health threat. Originally, Aachen Cathedral had planned to put the saint’s golden shrine on public view in the summer of 2020, as part of an exhibit on goldsmithery. Ironically, at a time when believers might be more drawn to Saint Corona than ever, the cathedral may have to postpone the exhibit if the crisis has not abated by summer.

Though public interest in Saint Corona has perked up due to the coronavirus, little is ultimately known about her life—or, for that matter, her remains. According to Catholic Online, it’s believed that she lived during the second century, in Roman-occupied Syria, where Christianity was outlawed. When a Roman soldier named Victor was tortured after the discovery of his secret Christian faith, Corona decided to publicly profess her Christianity in an act of solidarity. In this telling, the Roman judge Sebastian ultimately had both of them executed. Catholic Online suggests that their remains may lie in Anzù, in northern Italy, at the 11th-century Basilica Sanctuary of Saints Victor and Corona (not far from one of the areas hit hardest by the pandemic).

Candida Moss, a theologian at the University of Birmingham, in England, recently tweeted that Saint Corona’s remains are, indeed, in Anzù, rather than Aachen—assuming that Saint Corona had ever lived in the first place. In an email, Moss elaborates on the evidence suggesting Corona is an invented figure: The earliest records mentioning her emerged hundreds of years after her purported death, and the Roman legal system described in her story seems rather anachronistic.

Furthermore, according to Moss, Saint Corona is not one of the historic patron saints of infectious disease, contrary to word that has been spreading in the midst of the COVID-19 outbreak. Indeed, according to Catholic Online, “Corona is invoked in connection with superstitions involving money, such as gambling or treasure hunting.” Other traditions hold that Saint Corona is the protector of lumberjacks, since she was martyred while tied to two trees.

Even if these views of Saint Corona have dominated historically, Moss says it’s possible that different groups have viewed the saint in different ways. “The veneration of saints is a very regional affair,” Moss told Artnet. For example, she cites Saint Edmund—another patron saint against plague—who didn’t become associated with disease until 700 years after his death. The reason, Moss says, was an outbreak of plague in the French city of Toulouse, where Edmund’s relics were held, that caused the city’s residents to pray to him for protection.

Meanwhile, a similarly local understanding of Saint Corona seems to have emerged in the town of Kirchberg am Wechsel, in eastern Austria—home to its own Parish Church of St. Corona (Pfarrkirche St. Corona). A version of the church’s website, captured by the Wayback Machine in 2017 (long before COVID-19), states that “Holy Corona serves as an advocate for requests for steadfastness in faith, for requests against storms and crop failures, for averting epidemics and for requests for help in the small needs of everyday life.” Daniela Lövenich, a spokeswoman for the Aachen Cathedral, also told Artnet that Saint Corona’s association with plague “probably” comes from Kirchberg am Wechsel, not from Aachen or Anzù.

The Pfarrkirche also attempts to clarify some of the confusion surrounding Saint Corona’s remains and their whereabouts. They are, according to the church, divided between Italy and Aachen, where Holy Roman Emperor Otto III delivered some of the relics in 997. Charlemagne is also buried at Aachen Cathedral, a historic coronation site for German kings and queens. (The Pfarrkirche was built much later, in the 17th century, on the site of a statue of Saint Corona that was found in a tree—possibly placed there by the area’s lumberjacks.)

So all along, Saint Corona may have only been associated with disease in one small Austrian town, due to a statue in a tree and a specific confluence of local historical events. With the help of a new disease that takes her name—not to mention the internet—Saint Corona may now well become an international symbol of protection from disease. This is how it’s happened, after all, all the way back to Saint Edmund and beyond.

“Saintly traditions have always grown and developed over time as people call upon local saints for assistance in situations of crisis,” Moss wrote in an email, even if that means the saints already associated with an issue are neglected. (In the case of epidemic, that could be Edmund, Barbara, Aloysius Gonzaga, and Roch). Still, she wrote, it’s “surely a good thing” if people can now find comfort in Saint Corona—“[a]s long as they also self-isolate and don’t think Saint Corona can protect them.”

Let Your Mind Wander With These Gloriously Detailed Maps

“You can hear the creaks, smell the grain—you really feel the age of it.”
animals

Yancia the bulldog even made the local paper: "This Seattle Dog Wears Flu Mask."
plague

4:00
Want to see fewer ads? Become a Member.
From Around the Web
Atlas Obscura Trips
Culinary Naples: Producers, Purveyors, and Pizzaioli
View This Trip
Thanks for sharing!