What It Takes to Clean Up a Massive Nurdle Spill  - Atlas Obscura
Want to see fewer ads? Become a Member. 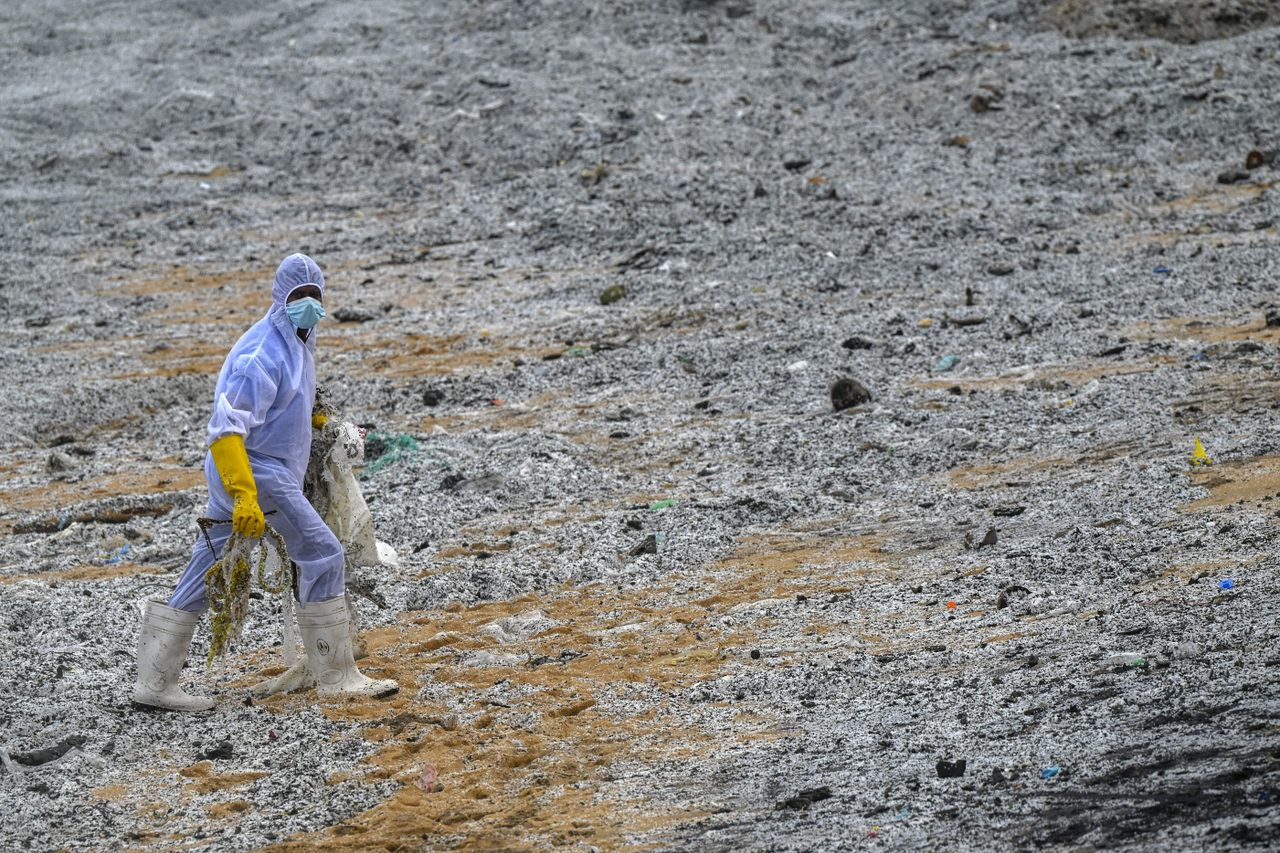 A Sri Lankan Navy soldier walks amid the debris washed ashore from the container ship MV X-Press Pearl in May 2021. ISHARA S. KODIKARA/AFP via Getty Images
In This Story
Destination Guide

On Sarakkuwa beach, 17 miles north of Sri Lanka’s capital Colombo, a group of women is sieving the golden sand, shovelful by shovelful. It’s 9 a.m., but the sun shines bright and the fringe of swaying coconut trees provides little respite. “It’s scorching hot,” says Anne Perera, wearing a long-sleeved blouse and a sun hat, with gloves on and her arms wrapped in an extra layer of sleeves. Sweat drips down her forehead, but as the leader of the group, she is motivated. On May 20, 2021, the container ship MV X Press Pearl caught fire just 10 miles from the coast. It spilled some 75 billion nurdles into the Indian Ocean. “The beach was covered in a thick, white layer of plastic pellets,” says Perera, “deep enough to cover our knees.”

The cargo ship, operated by Singapore-based shipping company X-Press Feeders, was carrying other manufacturing materials, including hazardous chemicals. It burned for several days before completely sinking on June 17. Among those industrial materials were the lentil-sized plastic pellets called nurdles, which get processed into things like toys, water bottles, and automobile parts.

Authorities and the navy began a cleanup of the beaches and removed the thick surface layer, but the nurdles, some of which were burnt, weren’t gone. The sand was still full of them, in some cases up to four feet deep. Perera and a team of women started cleaning their beaches with sieves in early October, even as the tides kept bringing new nurdles in.

Each morning, a backhoe digs up part of the sandy beach in Sarakkuwa. A woman then shovels sand into a mobile trommel machine, which has a cylindrical metal sieve. The slanted trommel rotates, dropping clean sand below and collecting refuse in a basin at the end. Meanwhile, another woman whacks the trommel with a wooden stick to dislodge trapped pebbles, while still another then separates the debris by hand into smaller basins: one for nurdles and one for larger plastic pieces. The Marine Environment Protection Authority (MEPA), which is in charge of the project, provided the women with three trommel machines. Only one is working now, Perera says.

There are also women using hand sieves fixed to a wooden frame. Two women hold the tray while a third shovels sand in. When work ends at 2 p.m., the nurdles are collected in large gunny sacks and taken to the MEPA unit across the street, which then takes them to a nearby warehouse. These days, Perera’s team only collects a few pounds of debris a day, but during a recent visit to Uswetakeiyawa beach, six miles to the south, they collected 90 pounds or so.

Perera says that everyone turns up daily for work, but she admits that gathering the team wasn’t easy.

“[The] priest from the village church told me that MEPA was looking for people,” says 49-year-old Perera, who’s also a community activist and a member of the village’s lagoon conservation society. Perera went from house to house, trying to convince women to join the program. She could gather only 20 in the beginning. “We heard that they’re paying us only 500 rupees a day. So not everyone was willing to come,” Perera says. “We turned up not for the money, but because it’s our beach. We wanted to keep it clean.”

MEPA upped its offer to 3,000 rupees (about $8) a day. “Then everyone wanted to join, and now we have 90 women,” Perera says, “Some women who couldn’t join don’t talk to me now because we earn more than them.” Most village women, Perera explains, work in the informal sector as day laborers to support their families. Perera, who’s a single mother raising two teenage sons, also works as a seamstress. She managed to buy a second sewing machine from the extra income. “Everything is expensive now. For us, 3,000 rupees is a big help,” she says.

But it’s not easy money. The women stand for six hours a day in the harsh tropical sun. “Some days, I get a bad headache. When I have sewing orders, I gulp a couple of paracetamol pills and start sewing,” Perera says. Most women at the site are in their mid-40s or 50s. “Young women don’t like to come because the sun burns their skin; they become dark,” Perera says, smiling.

When the ship disaster happened, Sri Lanka was in the midst of a Covid-19 wave. The local government had imposed a lockdown to minimize the spread, and Perera says that authorities barred them from visiting the affected beaches. “But we managed to sneak in,” she says. “How can you expect us to sit at home? It’s our village. It’s our beach. And a ship was on fire. It was sinking right in front of us.”

Muditha Katuwawala, Coordinator of The Pearl Protectors, a volunteer-based marine conservation organization in Sri Lanka, says, “The lockdown definitely hampered the initial crisis response.” While government authorities cleaned the affected beaches, the general public had to stay indoors. “People were curious. They were sad, disappointed, and angry about what’s happening,” he says.

As part of their response to the crisis, The Pearl Protectors mobilized 2,000 volunteers across the island, launched the Nurdle Free Lanka campaign, and conducted their first clean-up in early July at Mount Lavinia beach in Colombo. Since then, they had weekly cleanups until December 2021, and monthly cleanups from the beginning of 2022. Volunteers at The Pearl Protectors use methods similar to Perera’s team’s.

“I’ve never seen our beaches like that. It was really sad to see the nurdle spill, posing threats to marine life. I was so worried,” says 17-year-old Zara Bohari, a volunteer at The Pearl Protectors. Bohari, who’s passionate about protecting the marine environment, has only missed three cleanups so far.

With help from their volunteers, The Pearl Protectors conducted weekly surveys to identify the nurdle spread in 20 to 30 target locations. Sarakkuwa, the epicenter of the incident, is on the central western coast of the island. By early July, nurdles were spotted on the east coast. Katuwawala says that they are now frequently recorded on the south coast as well.

Sri Lankan marine scientist Bimali Koongolla, who works as a researcher for North Carolina’s Helix Science LLC, says that it’s hard to predict where all those nurdles will end up. Many factors such as wave action, wind patterns, water density variations, and salinity can affect the spread, she explains. “We’ve always had a huge problem with microplastics in our ocean waters,” says Koongolla, meaning any plastic piece less than 5 mm. For a 2018 study published in the journal Marine Pollution Bulletin, Koongolla examined microplastic pollution along 50 miles of the south coast of Sri Lanka, including beaches, harbors, and fisheries. They found microplastics in 60 percent of sand samples and 70 percent of water samples. “The numbers are higher in Sri Lanka compared to other developing countries in the region,” says Koongolla, who’s currently studying the microplastic fallout of the X Press Pearl disaster. “And we can see that the numbers are definitely higher now compared to 2018,” she adds.

Microplastics, Koongolla explains, are very similar in size to the food particles consumed by most marine life, so they end up in the digestive system of fish and other creatures, inhibiting their overall growth and possibly having other detrimental effects. They also affect the photosynthetic activity of microalgae, the basis of the marine food chain. “Humans eat this fish. We also inhale microplastics because they are in the air we breathe,” Koongolla says. “I keep telling people that microplastics will be the next big problem in the future. It already is, but most of us don’t realize that. People have the idea that because microplastics are so small, they can’t harm us.”

The presence of burnt nurdles on Sri Lankan beaches could exacerbate the problem. “Not only have their physical properties like color, shape, and size have changed, their original chemical compounds have been altered,” says Koongolla. There’s little to no previous research on such burnt microplastics, Koongolla says. “We can’t tell much about their impact yet.”

Back on the Sarakkuwa, Perera’s team continues to work. Their cleaning project will end soon, Perera says. “It’s impossible to clean completely. We’ll never get rid of these small plastic beads, but we are trying our best.”

“What we can do now is to remove nurdles as much as we can, and most importantly, push for policy changes,” Katuwawala says. “It’s been months since the disaster, but Sri Lanka has failed to establish any regulations or receive adequate reimbursements.”

The Pearl Protectors, he says, want to push the local government to work on this matter and has launched a petition. The International Maritime Organization (IMO), he explains, needs to implement tighter regulations and controls for the maritime transportation of nurdles. “If they side with big multinational corporations working for profit, it’s going to do a lot of damage to our oceans and marine life. This is not the first time a nurdle spill has happened,” he says. “This is the worst incident, and it can happen again.”

The world’s largest array of greenhouses has transformed the region economically, and in other, unforeseen ways.
floods

The coastal community of Selsey welcomes the return of salt marshes where farms once stood.
science

Lauded for her research on gentle giants of the sea, Andrea Marshall is using her fame to find hope for our troubled oceans.
Video