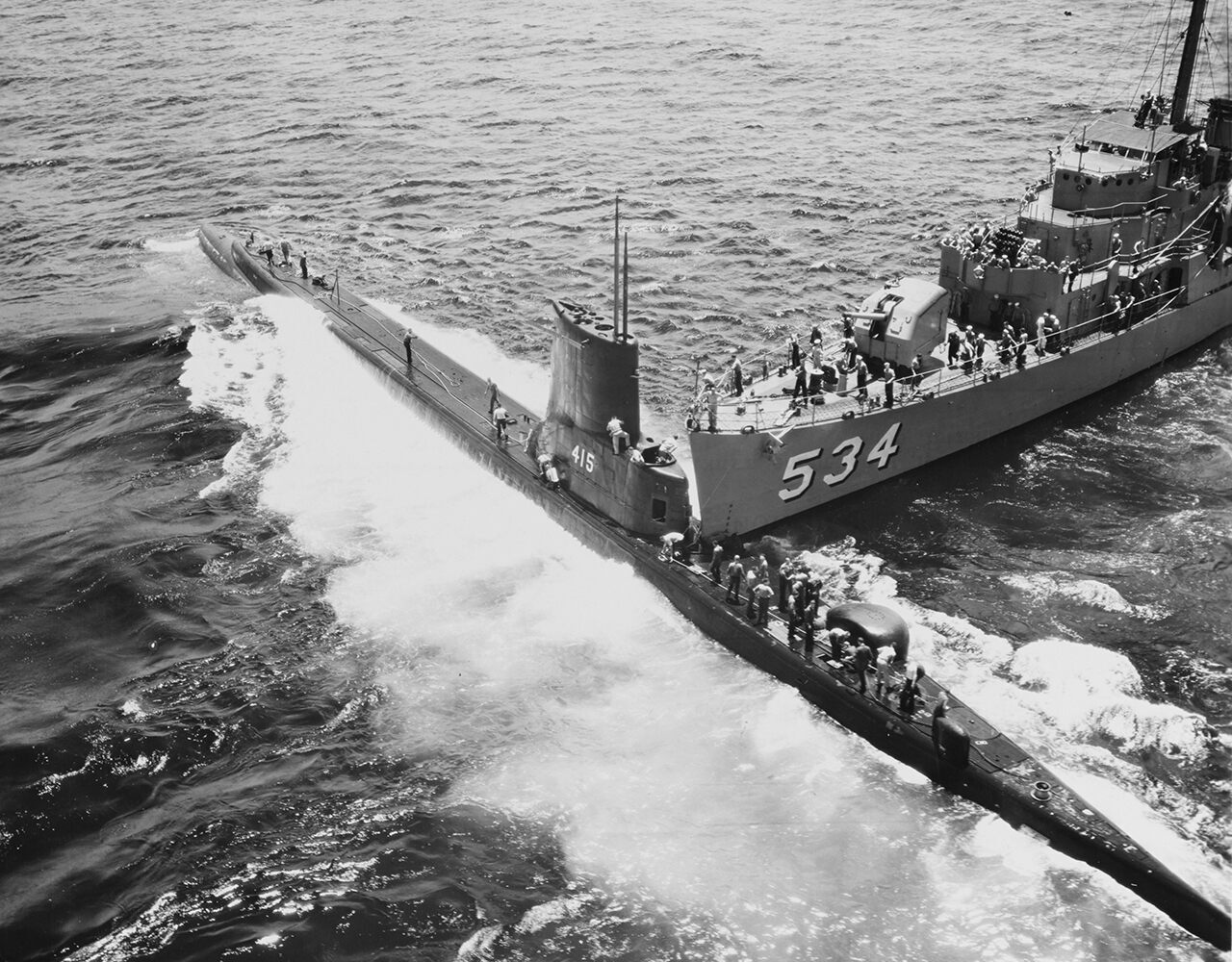 The Stickleback met its maker when it was broadsided by the friendly Silverstein. PHAAN R.K. Ahlgren / National Archives / Naval History and Heritage Command, Washington, DC
In This Story
Destination Guide

The crew of the USS Stickleback didn’t expect things to end this way—rising from the depths on May 28, 1958, only to be broadsided by the hull of a friendly American destroyer, the USS Silverstein. The Stickleback sank to the bottom, an 11,000-foot journey to nowhere.

Now, 62 years since the sub disappeared from any radar screen—and became one of only four U.S. Navy submarines lost since the end of World War II—it’s been found again.

The sub—named for a spiny, scaleless fish native to many northern waters—was found off the coast of Oahu, Hawai’i, by the Lost 52 Project, an independent initiative to find the 52 American submarine wrecks from the World War II era.

The great depth of the wreck (over two miles beneath the surface), and the fact that its precise resting place was unknown, allowed the submarine to elude discovery until now. The project found the sub by cross-referencing old records with modern sonar technology and remote submersibles, which eventually located the ship split in two at the bottom of the sea.

Subs are solo actors in naval warfare, says Tim Taylor, head of the underwater-technology firm Tiburon Subsea and founder of the Lost 52 Project, who recently spearheaded the team that identified the Stickleback. Unlike ships, he says, “when they went missing, there was no fleet close [by] to witness and record the loss.”

The Lost 52 Project, Taylor says, often finds itself parsing flawed wartime data to decipher the location of wrecks. Ironically, the sonar technology used to find the Stickleback was developed largely due to the advent of submarine warfare—the same reason the Stickleback existed in the first place.

For Taylor and his team, challenges abound. “We have many items to overcome [in our work], such as international permits, weather, mechanical, and technical issues that arise on all expeditions of this nature,” Taylor says. “The [biggest] challenge is looking for lost ships using limited 75-plus-year-old data.”

The Stickleback’s sinking could have been far worse. It occurred in 1958, after the sub had come out of decommission—ship retirement—to serve in the Korean War. A training exercise gone awry had caused it to plummet through the depths; when the sub managed to resurface, it found itself in the path of the Silverstein. A collision was unavoidable, yet no one was hurt, and the Stickleback’s crew scrambled onto the friendly destroyer before the sub foundered and slipped below the waves, this time for good.

The Stickleback is a rare example of a submarine wreck without any casualties. “Submarines are built to keep water out,” Taylor says. “What they also do, by virtue of that, is they keep men in. For a [wrecked] submarine, it guarantees those men are in there.”

Without a soul on board, the sunken submarine off the Hawai’ian coast is a piece of human history that exists in a very different environment than, say, a history museum.

“The ocean floor at these deep depths [is an] alien environment,” says Robert Neyland, the head of underwater archaeology for the Naval History and Heritage Command. “I think people are really attracted to something they can recognize there, and the sacrifices people have made in the past.”

Balconies, Windows, and Rooftops Are the New Public Squares

After decades of searching, the site where 400 lost their lives has been identified.
shipwrecks

This slave trade is well known to historians, but this is the first known wreck from it.
churches

The discovery adds to our knowledge of Makuria, which ruled a vast region of Africa for six centuries.
trains

More than a century ago, a couple of guys had some beer and an idea.
Video • Gastro Obscura

4:00
Want to see fewer ads? Become a Member.
From Around the Web
Atlas Obscura Trips
Science After Dark: Spotting Squid in the Tides of Oahu
View This Trip
Thanks for sharing!