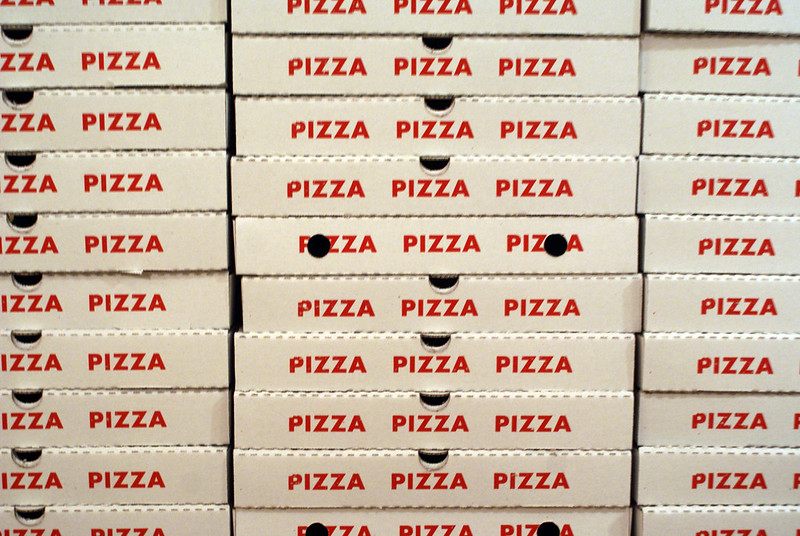 THIS ARTICLE IS ADAPTED FROM THE MAY 7, 2022, EDITION OF GASTRO OBSCURA’S FAVORITE THINGS NEWSLETTER. YOU CAN SIGN UP HERE.

In a diner last week, a waitress briskly slid me a platter of pancakes. On the blaring TV, reporters were asking shoppers what they thought about New Jersey’s new law banning single-use plastic and paper bags. “One of the strictest in the nation,” intoned a newscaster.

As I struggled to finish my pancakes, I listened to him explain how that law also extends to styrofoam takeout boxes. Just before I left, the waitress even offered me one: the classic white clamshell.

Personally, I support a ban on styrofoam boxes. Not only are they bad for the environment, but they’re also … boring.

“But Annie,” you ask, “aren’t all takeout containers boring?” No! For this job, I’ve chatted with avid collectors of elaborately printed pizza boxes and gazed at plastic sushi containers collected by the Smithsonian.

Takeout containers—especially for pizza, Chinese food, and sushi—have an iconic art and style. Granted, it’s not always the most elegant or politically correct, but some of these designs are now instantly recognizable. So, today, we investigate the origins of the smiling chef of pizza-box fame, the ubiquitous red pagoda of American-Chinese takeout, and the surprising elegance of plastic sushi trays.

Several years ago, I interviewed Scott Weiner, the owner of the world’s largest pizza-box collection. His boxes, which are brand new and grease-free, range from Domino’s boxes shaped like R2-D2 to fancy pizza places’ stern white boxes embellished only with minimalist black text.

My favorite pizza-box motif, though, is the Winking Chef. This piece of clip art has graced millions of pizza boxes over the years: a jolly-looking man in a high chef’s hat, winking, with his hand raised in an “a-ok” gesture. You’ve likely seen a similar man printed on take-out menus, or as a statuette outside restaurants holding a list of specials.

But who first set pen to paper and drew this self-satisfied cook? Weiner dove into researching his origins, noting along the way that the chef, though instantly recognizable, is often modified—sometimes winking, other times only knowingly raising an eyebrow.

One day, Weiner stumbled upon the Holy Grail: a pizza box printed with a signed illustration. The chef on this box wasn’t winking, and he held a slice of pizza rather than making any kind of gesture. It was the work of American cartoonist Gill Fox, who in his 20th-century heyday was twice nominated for the Pulitzer Prize.

In Fox’s 2004 obituary, the New York Times claimed that “the betoqued chef, winking and making an A-O.K” sign was his work, even though the signed illustration Weiner found featured neither winking nor the gesture. The standard clip-art chef seems much more crudely drawn than Fox’s work, though the chef’s hat, kerchief, and mustache are suspiciously similar.

Fox is said to have drawn the chef in the early 1950s, copying the style of a co-worker and selling it to a clip-art service as a joke. Perhaps the chef underwent plastic surgery by pen over the years, tweaked by other artists. Today, said chef is an implicit promise—from pizza place to customer—that good food awaits inside the box.

The Chinese takeout box is a marvel of engineering. Descended from 19th-century oyster pails, the folded, waxed-paperboard design was patented by Frederick Weeks Wilcox in 1894, and has changed very little since.

According to The New York Times, a designer at what is now Fold-Pak decided to add a red line drawing of a pagoda onto the side. The take-out container manufacturer also added the words “Thank You” and “Enjoy,” in what is now derisively known as “wonton” font, letters used in 20th-century American marketing that mimicked the strokes of Chinese calligraphy.

The designer is unknown to this day, but it’s now rare to see a Chinese takeout box without the red pagoda and faux calligraphy.

A few years ago, Xinhua, the official state newspaper of the People’s Republic of China, published an article explaining the containers, which are a common sight in American shows and movies but non-existent in China itself.

The image, according to Xinhua, is the Porcelain Tower, a pagoda constructed in 15th-century Nanjing. The 9-story, 260-foot-tall edifice, walled with glazed porcelain bricks, was considered a marvel both in China and abroad. In the West, some writers held it as one of the seven wonders of the Middle Ages, a category that includes both the Hagia Sofia and the Leaning Tower of Pisa.

Sadly, the original tower fell victim to the chaos of the Taiping Rebellion in 1856, when rebels razed it to the ground. If that long-forgotten Fold-Pak designer truly did use it as a model for their shorter, simpler tower, they must have referred to old images of the building drawn by Chinese and European artists.

But the Porcelain Tower stands again today. In 2015, the Chinese government completed a full-size replica in a Nanjing park devoted to the building’s history and importance.

The second style of sushi, though, still retains some elegance, largely thanks to its presentation: in a gleaming, decorated plastic tray with a clear lid.

Many plastic sushi trays, if made out of wood instead, would be quite lovely. Which is the origin of their appealing design—they’re based on traditional Japanese plates.

“The colored tray often comes with printed embellishments, replicating the types of designs commonly found on Japanese dishware, making it a critical feature in effectively marketing the product as Japanese,” reads the National Museum of American History website.

Your average sushi tray is black, with deep-red and gold flourishes—an imitation of Japanese lacquered dishware, or urushi. Black, red, and gold are the most common colors in lacquerware production, which is a truly ancient art, dating back to the Neolithic era. (Real wooden lacquerware is phenomenally expensive and can even be gilded with real gold.)

The NMAH actually owns a collection of plastic sushi trays, many of which were produced by the Advanced Fresh Concepts Corporation. Founded by Ryuji Ishii, who longed for accessible sushi in the United States, the company was the first to pre-package and ship large quantities of sushi to American stores. Ishii succeeded in making sushi ubiquitous, and, as extra credit, made these plastic versions of fine dishware just as common.

Or even years.
food

By making pizza approved by the Communist Party.
art