The Ancient People Who Burned Their Culture to the Ground - Atlas Obscura
Want to see fewer ads? Become a Member. 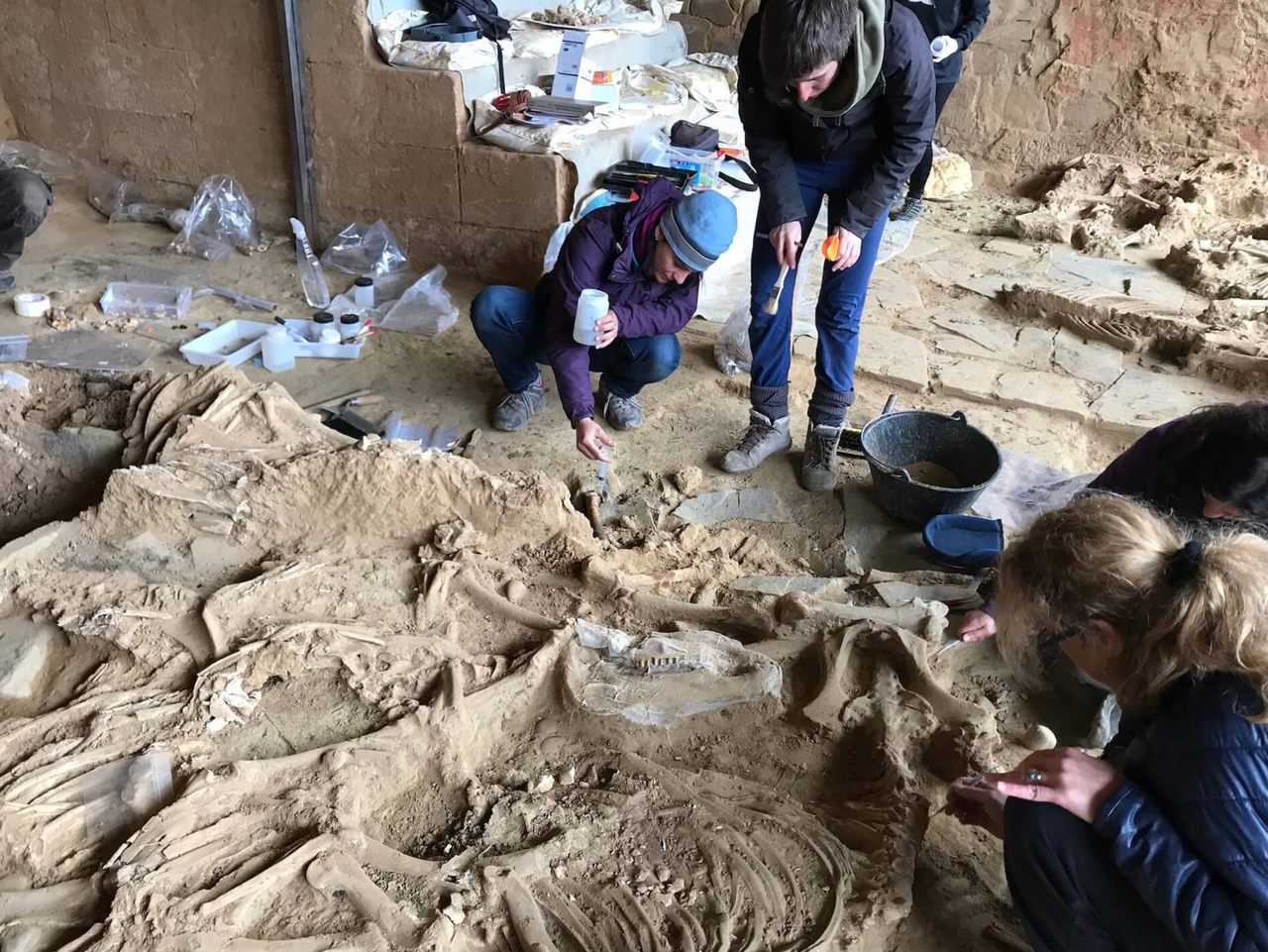 Team members have found the bones of more than 50 animals sacrificed in a courtyard at Casas del Turuñuelo. Courtesy Construyendo Tarteso at the Archeological Institute of Mérida
In This Story
Destination Guide

Smoke billows skyward, partially obscuring a monumental, two-story hall. The smell of roasting meat is thick in the night air, still oppressively hot though the sun has set on this arid valley in what is now southwestern Spain.

Inside the hall, hundreds of people gather around a long wooden table set with fine ceramics and bronze challices. They feast, and drink rivers of wine as the night deepens. A few feet outside the banquet hall, down a massive staircase, a fine-boned horse is led into an open courtyard. Perhaps observed by those who had been feasting, the animal’s throat is opened with a single slash. It is the first of dozens of sacrifices: other horses, cows, donkeys, pigs, a dog—and possibly humans—all brought to this place, ritually killed, and left as offerings to the gods. When the sacrifices end, the people remaining take up torches and set fire to the site, burning the bright red-painted plaster off its adobe pillars and charring the bodies of the sacrificed. As the last embers die out, they use shovels to bury the courtyard, the hall, everything. The work takes days, and will leave the site beneath a layer of dirt and clay nearly 14 feet thick in places. And then the people, the last known members of the Tartessos civilization, disappear from the world.

Some of the details of the grand finale feast and mass sacrifice that occurred about 2,500 years ago can only be sketched. But the dramatic end to Tartessos seems fitting for a civilization that often loomed larger than life in ancient history. Anchored by a port city bearing its name, and with a cultural reach that spanned roughly the southwestern third of the Iberian Peninsula, Tartessos emerged in the ninth century B.C. For about 400 years, Tartessos was, to the ancient Greeks and other contemporaries who wrote about it, a near-mythic culture rich in resources and technologies, including shipbuilding and metallurgy. Then it disappeared. Today, researchers consider Tartessos to be the Western Mediterranean’s first historical civilization. Now, at an excavation in Extremadura—a region of Spain that borders Portugal, just north of Seville—a new understanding of how that civilization may have ended is emerging from the orange and yellow soil. But the site, Casas del Turuñuelo, is also uncovering new questions.

The site was first surveyed in 2014, but the quick study, planned for a week, more than tripled in duration when the team realized its potential. Subsequent excavations exceeded the initial expectations. In 2017, for example, archaeologist Esther Rodríguez González, of the Institute of Archaeology at Mérida, unearthed the remains of two horses that had been buried with their hooves intentionally and symmetrically crossed. They are among more than 50 animals unearthed at the site so far. In 2018, the team found the remains of a man in a separate area; while analysis of the bones is ongoing, the project’s director, Sebastian Celestino Perez, and other team members believe the man may have been sacrificed.

Artifacts from the site include bronze cauldrons and braziers, highly decorated bone and ceramic plates, part of a marble sculpture imported from Greece, and other items from as far away as Macedonia. Surviving structures include the remains of a drainage system and a stone stairway that was built using a lime mortar technique previously thought to have originated with the Romans at a later date. Celestino says the site may contain some of the most important archaeological discoveries on the Iberian Peninsula—and the team has so far excavated less than a quarter of it.

Tartessos was the first Iberian culture known to have traded across the Mediterranean, as far as present-day Israel, Greece, and Egypt, and its wealth was famous throughout the region. Some researchers, including archaeologist Richard Freund of Christopher Newport University, have even suggested that the port city of Tartessos, the heart of the civilization, may have been the inspiration for the mythical Atlantis. The idea stems from Aristotle’s linking of a river in southern Spain with both Atlantis and Tartessos. Herodotus wrote that Tartessos was a culture beyond the Pillars of Hercules, a term from antiquity commonly understood to mean the rock of Gibraltar and the Moroccan mountains that face it across the strait. Another Greek historian, Ephorus, described Tartessos as prosperous, “with much tin carried by river, as well as gold and copper.” The wealth, advanced technology, and reach of Tartessos are also mentioned in the writings of other sources from the era. “Their sophistication was remarkable,” says Freund.

Why Tartessos vanished remains a mystery. Celestino thinks that one or more major earthquakes, and subsequent tsunamis, may have destroyed most of its coastal settlements and demoralized survivors. Tartessos was a sea culture and, according to Freund, “To find these sites in Extremadura, hundreds of miles inland, means something.”

The inland sites, Freund adds, suggest that the people who constructed them were “running from something. They felt their gods had turned against them. So they built these banquet halls and made these sacrifices to appease them. Apparently it didn’t work.”

The sacrifices included some of their most prized possessions: horses. “We still have many unknowns, [but] we do know that the sacrifices are directly related to an offering to the gods, possibly because they were seeking their protection in these new lands in which they were settling,” Rodríguez says. She adds: “It is also curious that the only means of transportation that one has is sacrificed.”

The sacrifice of horses might suggest the people at Casas del Turuñuelo planned to stay there for a while. This is no temporary camp, but a site of monumental, impressive architecture—the massive staircase and a vaulted ceiling are among the most significant discoveries at the site, say team members. According to Rodríguez, “The state of conservation of the building is allowing us to document construction techniques and materials to date unpublished in the protohistory of the Western Mediterranean.” Speaking to El Pais in 2018, Celestino noted: “[Buildings like this] existed in very ancient Mesopotamian cultures but we have never before come across anything like it from this period or in this area.”

Whether the people at Casas del Turuñuelo intended to stay at the location is uncertain, but archaeological evidence shows they did not. When the feast was over and the sacrifices made, they buried the site and abandoned it, vanishing into the Iberian countryside. And now, the site is abandoned again, as quiet as it was for more than two millennia. Due to a disagreement between the landowners and the regional government of Extremadura, the archaeology team currently does not have access to the site; further excavation and study is on hold. Rodríguez says the site has become like a child to her, and she wakes up at night worrying about potential water damage and other threats to the partially excavated buildings and piles of bones.

The site is an archaeologist’s dream, she adds, preserving a wealth of information and mysteries to be unraveled. By burying the site, the people of Tartessos protected it. “Concealment is part of the final ritual for the closure and abandonment of these buildings, with the aim of protecting them from looters and saving them from the passage of time,” Rodríguez says. The site burial raises another question about Tartessos: Did they intend to vanish, or did some unexpected catastrophe befall them as they walked away from the site, leaving buildings and bones behind as clues to a lost civilization?

To uncover new clues about the secretive world of Mithraism, scientists considered evidence right at their feet.
islands

A rich local history has long been overshadowed by a few months under a Russian flag.
science

A surprise discovery from Haiti may finally reveal how some famous feral horses got to a distant barrier island.
medieval

1:26
Want to see fewer ads? Become a Member.
From Around the Web
Atlas Obscura Trips
Barcelona & Catalonia: A Feast for the Senses
View This Trip
Thanks for sharing!