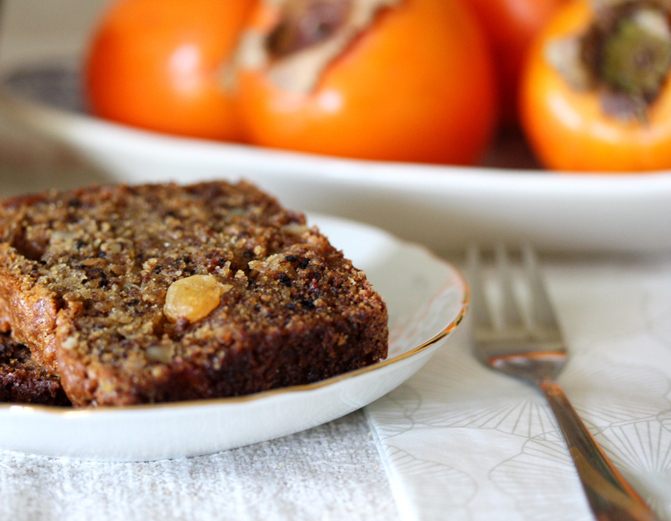 Persimmon bread is an unusually popular side dish in California on Thanksgiving. Zsuzsanna Békefi/Getty Images
In This Story
Destination Guide

This article is adapted from the November 20, 2021, edition of Gastro Obscura’s Favorite Things newsletter. You can sign up here.

As a food-obsessed child, I always elbowed my way into the kitchen before Thanksgiving to “help.” The frazzled adults often set me to folding napkins or rinsing glasses.

What I really wanted was to help make my uncle Gary’s top-secret sausage stuffing, or assist my aunt Sharon in the laborious, all-morning task of baking the family specialty known as Wonga’s Potatoes. The main ingredient: many, many hand-grated boiled potatoes, no food processor allowed.

Only my grandmother pitied me enough to let me help with her signature JELL-O salad, made with a thick layer of sour cream in the middle.

If you’re celebrating Thanksgiving this week, your family likely has its own sacred dishes. For almost everyone, that means a ginormous turkey. But the sides—everyone’s favorite part of the meal—often vary widely and colorfully, often reflecting family history, local culture, and regional products.

Case in point: This 2014 research project from the New York Times and Google pinpointed unique Thanksgiving favorites frequently Googled in each state.

As a lifelong Californian, I scratched my head when I saw “persimmon bread” listed for my state. But it makes sense. Thanksgiving is often peak persimmon season, when Californians’ backyard trees produce a glut of the fruit that everyone rushes to use.

So here’s a roundup of some of the most fascinating regional favorites of the Thanksgiving holiday. Inspired by the NYT analysis, which I’ve thought about every Turkey Day for seven years, I’ve written this week about four side dishes with local character. Now, if you’ll excuse me, I need to go find some persimmons.

Here’s a case of local bounty leading to a regional side dish. Minnesota is the land of wild rice, cultivated and harvested extensively by Native peoples such as the Ojibwe to this day (and by others as well, but much more recently). This grass grows in lakes and waterways, and has a complex, nutty flavor.

Wild rice, or manoomin in the Anishinaabeg language, is North America’s only native grain, making it a good fit for your Thanksgiving table.

This fun and easy dessert riffs off another regional specialty. A sopapilla, for those unaware, is a pillowy fried pastry popular across the Southwest.

So how does one make a sopapilla cheesecake? Start with Pillsbury Crescents, unfold them, pour in a cheesecake filling, and bake. The thin unrolled Crescent rolls bake into a crust that tastes an awful lot like crispy sopapillas.

I always thought my grandmother’s JELL-O salad, with its sour cream layer, was a bit odd. Also odd: We considered it a salad, not a dessert, and plated it with the green beans.

Frog eye salad, a favorite in many Western states, also comes out with the savory course, but its name and ingredients put my grandma’s humble gelatin to shame. There are no frog eyes, but there are small pasta tubes, Cool Whip, and pineapple.

The pasta gives the salad a lumpy texture that a cynical eater could compare to a clumpy pile of frog eyes. But don’t let that put you off trying this multi-state favorite.

Utah also eats a lot of frog eye salad, but funeral potatoes are their unique addition to the American table. There’s nothing especially sad or tragic about funeral potatoes. The name comes from the dish’s frequent presence at funeral potlucks, especially in the Church of Latter-Day Saints (Mormon) community.

The essential element that distinguishes these cheesy potatoes from other special-occasion spuds is the crunchy topping, typically made from corn flakes. I never realized until today how similar funeral potatoes are to my family’s Wonga’s Potatoes, except we use breadcrumbs for crunch, rather than cereal.

It made American pies rich and indulgent.
food

The Savvy Marketing That Put Marshmallows on Your Sweet Potato Casserole

"I’ll have it with my Roast … and again for dessert."
science

The main casualty of the catsup war was flavor.
Video • Wonder From Home