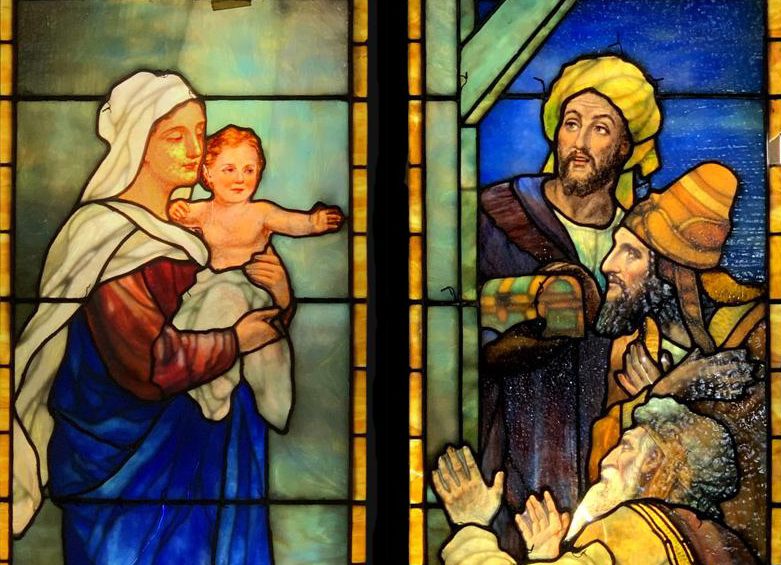 After surviving a church fire, the windows sat in a garage for 50 years. Donley Auctions
In This Story
Destination Guide

In 1972, three days before Christmas, a historic church on the South Side of Chicago burned for eight hours straight. The flames licked the interior of the St. James Catholic Church until its insides were hollowed out. In an attempt to stanch the fire, firefighters destroyed many of the church’s towering stained-glass windows. But two enormous panels survived, having recently been stowed away in the church’s basement for repairs. Their carefully rendered depiction of the Virgin Mary and the Baby Jesus were blanketed in soot, but a quick swipe of the finger proved the glass had survived the fire.

Desperate for funds to rebuild the church, the parish sold the windows, which languished in a suburban garage for years, gathering dust and in need of restoration. Now, the windows are up for auction at Donley Auctions on November 15. “They’re masterful,” says Mike Donley, who co-owns the company with his brother Randy. Randy hasn’t seen any windows like this come through their shop in 45 years.

Demolished in 2013, St. James was first built in 1880 to accommodate a growing parish of Irish-American families. After the fire, the church sold the windows to a restoration architect named Paul Straka, Donley says. But it’s not easy to take panes of glass that once peered into a church and properly display them in a suburban home, so Straka stacked the two windows in his garage, along with others he purchased from the church. They sat there for 50 years, Donley says, until the older Straka realized he would never do anything with them, took them out from under a removable truck shell, and sold them to Roger Merenkov, the owner of Touch of Beauty Brass and Lighting. “I saw a picture Roger took of that pile of windows, and it looked almost like an archaeological dig, just a pile of glass and lead,” Donley says. “In the 1970s, people didn’t think of them as the treasures they are today. They saw them as just another window.”

The incredible artistry of the two windows has convinced the Donley brothers that the panels are the work of the iconic Louis Comfort Tiffany, who designed many stained glass windows for churches during his career. They believe the windows were installed in the initial construction of the church in 1880, which would make them early examples of the glassmaker’s work.

The windows display incredibly fine detail that are characteristic of Tiffany’s work. “These windows were meant to be viewed from 50 feet away, but close-up you can see the individual hairs in their beard,” Donley says. “One pane of glass literally looks like it has a sunbeam shining down on Baby Jesus,” he says. “That was Tiffany’s artistry, the way he used glass to paint a picture in 3D.” He also points out that the glass depiction of the Virgin Mary’s skirt was created by folding glass, creating an incredibly realistic effect. “People ask me, ‘Well, how do you know it’s a Tiffany?’” Donley says. “You just know a Tiffany when you see it.”

At least one Tiffany expert disagrees. Wayne Boucher, a mathematician at Cambridge University, created the Tiffany Window Census, a catalogue of where Tiffany’s art is now, and where it once was. Boucher knew St. James once had several Tiffany windows, three of which were titled the “Annunciation”, “Transfiguration”, and “Nativity” after the scenes they depicted. “This auction came as a surprise to me since the 1972 Chicago Tribune article about the fire said that three Tiffany windows had been destroyed,” Boucher writes in an email. (He acknowledges that the Tribune could have its details wrong.)

The Donleys contend that the two Tiffany windows date back to 1880, but Boucher’s research conflicts with that date. Tiffany published records of his windows in 1897 and 1920, and Boucher only saw a reference to St. John in the 1910 entry. “The two windows in the auction, if they are indeed by Tiffany, date to post-1910,” Boucher says, adding that he believes the “Nativity” window in the auction may in fact depict another theme, the “Adoration of the Magi.” He doesn’t disagree that the windows could be Tiffany, and say they look like they could have plausibly been crafted by the artist. But he says the windows also could have come from Church Glass and Decorating Company, a company founded in 1899 by ex-Tiffany employees.

Though the windows may not be Tiffany originals, they certainly are a beautiful piece of South Side history. Whoever buys them will have to restore them, as small pieces of glass have broken off during the windows’ many years in storage, Donley says. Fortunately for the would-be buyer, when Tiffany Studios closed in 1933, the company left behind thousands of sheets of glass that make Tiffany glass restoration easier than it might sound, he says. So even if the windows aren’t Tiffany originals, they could be brought back to their former glory with the artist’s own glass.

Understanding the Majesty and Complexity of Great Organs

Notre Dame's famed instrument is being dismantled and restored following the 2019 fire.
churches

This intricately carved church is one of Norway’s great treasures of architecture.
churches