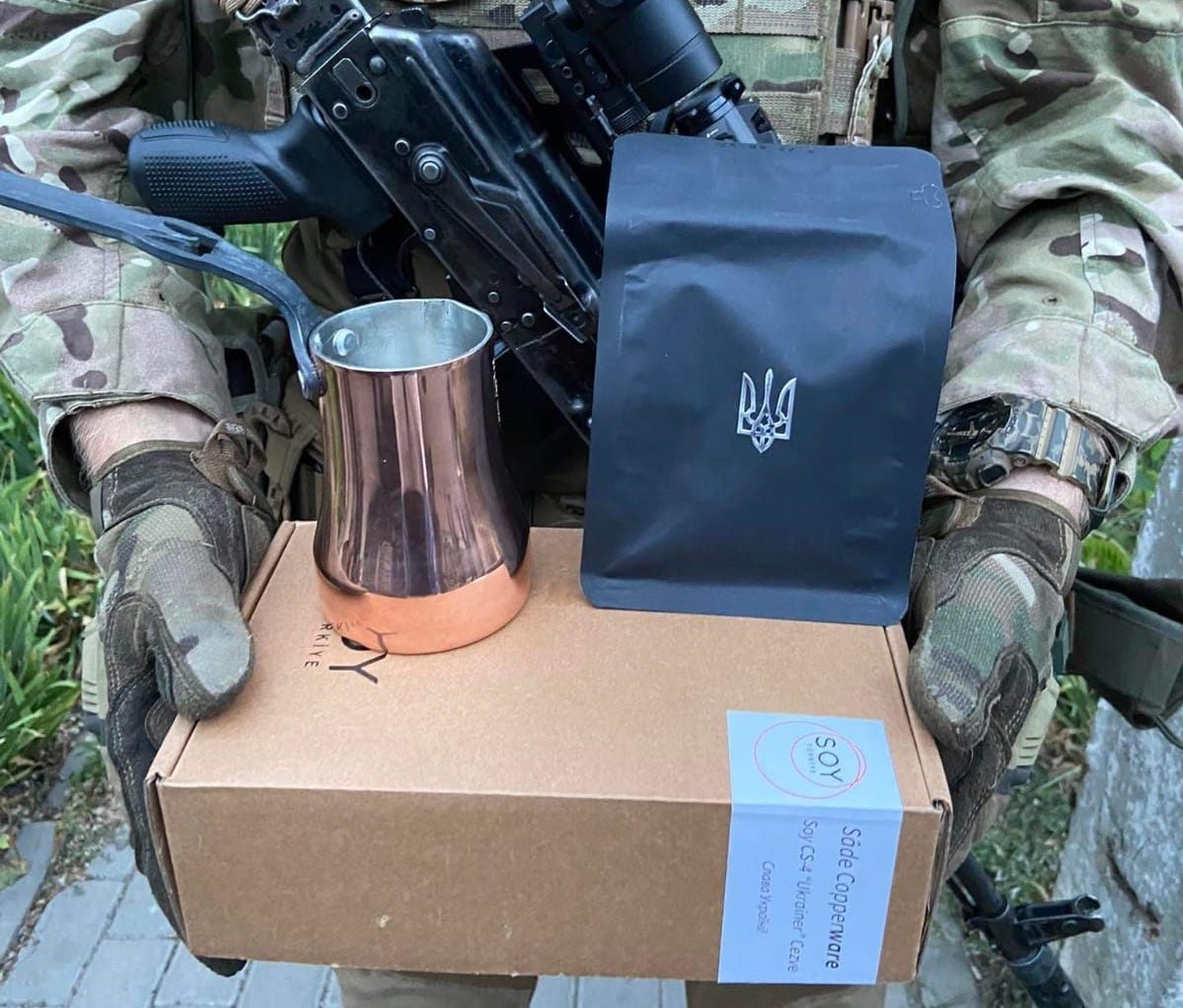 Russia’s full-scale war against Ukraine has entered its fifth month. Amongst the unrelenting devastation and horror, fierce resistance continues to emerge in what has become a struggle of existential proportions for many Ukrainians. People from all walks of life have mobilized to support the defense of the country, including one of Ukraine’s leading baristas and coffee experts.

Vadym Granovskiy awoke the morning of February 24 to the sound of explosions. The 43-year-old knew instantly that the war had begun. After eight years of supporting separatist conflict in the east of Ukraine, Russia was now assaulting the entirety of the country. “You knew something probably would happen, but you hoped, kind of desperately, that it would not,” he recalls.

As the fighting approached the town of Brovary, near Kyiv and not far from his home, Granovskiy and his wife took their infant daughter and began driving towards Poland. The normally 10-hour drive took them four days. Once his family was safely across the border, Granovskiy turned around. Though not a soldier himself, Granovskiy felt compelled to contribute to the resistance in some form. “I saw the tanks being blown up; I saw the corpses,” he explains. “I could see the real war, not on the screen, not on the phone. It was there.”

Long before the war began, at his Kyiv-based café Coffee In Action, he had befriended some of his regular customers who happened to serve in the military. On his return, many were deployed in defense of Kyiv. Almost immediately, he began making packages of coffee and an energizing purée of cold brew, cashew, and banana to give to soldiers he knew personally. Through word of mouth, the demand quickly grew, and soldiers at the front began to ask for stronger coffee to help them stay awake and alert. Granovskiy knew he had just the drink.

Granovskiy is one of Ukraine’s leading experts of the cezve, or ibrik, brewing method. Commonly called “Turkish” or “Eastern” coffee, the technique utilizes a long-handled pot, which is called a cezve, to brew finely ground coffee beans in water over a flame without a filter. The grounds are left in the cup when served, and the result is a strong cup of coffee. The brewing method is popular throughout regions of the former Ottoman Empire and its periphery.

Granovskiy happens to be a 2014 finalist in the Cezve/Ibrik Championship, managed by World Coffee Events. Though he’s a specialist in traditional cezve, he also occasionally adds his own spin to the drink. Before the war, when Granovskiy wanted a very strong cup of coffee, he would brew himself a pot of cezve coffee and mix it together with a double espresso. When soldiers began asking for stronger coffee, he realized this mixture could be the solution.

At first, he experimented with cold brew. But then, he realized that the soldiers he corresponded with were all making cezve coffee when they could. Soon, Granovskiy began providing all the beans and materials for his powerfully caffeinated coffee to be made at the front lines, free of charge. The strong drink is bitter, but will certainly keep anyone awake.

Granovskiy proudly delivers coffee supplies to the front lines, whenever it’s safe enough. To him, the cezve is both an energizing and encouraging force. “Apart from the functional side of coffee, there is a social part. People talk when they drink coffee. I wanted soldiers to have this small ritual, which unites them,” he explains. “If you watch the way a coffee is brewed with [a] cezve, it takes a few minutes.”

When Granvoskiy makes coffee, he places finely ground beans into a pot, adding water and gently heating for five to seven minutes, skimming foam away as needed. While the coffee heats, it gives soldiers something pleasant to focus on. “So you’re paying attention to it in a way that’s similar to meditation,” says Granovskiy. “All of your attention goes into this brewing and I wanted them to have this as a psychological practice of making coffee and letting go.”

For Valeriy Siverchuk, 49, a soldier, restaurateur, and friend of Granovskiy currently fighting in the Kharkiv region, the coffee does work as intended. “It’s true, when there are no strikes or attacks, it helps us to relax,” he explains, via a Zoom call.

A few weeks into the war, a friend and colleague in Ukraine’s culinary world, 35-year-old chef Ievgen Klopotenko, reached out to Granovskiy to discuss an idea. “He said, ‘Look, I am all about borsch, but there should be strong coffee which represents Ukraine. I feel that coffee could be our thing as well,’” Granovskiy recalls, “I replied to him, ‘Well there is one, we already did it, it’s cezve and espresso in one cup.’” Drinking such a bitter, caffeinated coffee would be nothing for Ukrainian defenders, but would “pretty much kill you if you’re a Russian soldier,” he jokes.

Klopotenko, who has gained international acclaim for his promotion of Ukrainian cuisine, sees Granovskiy as a leader of Ukraine’s booming local coffee culture. In the context of Russia’s war on Ukraine and Vladimir Putin’s consistent attacks on the validity of the Ukrainian identity, the need to uphold culture and achievements has never seemed greater. “Food and language and all these things that represent our identity are like a second front,” says Klopotenko.

With that conversation, the drink known as the Ukrainer was born. Granovskiy now collects donations and works with a Turkish manufacturer to produce hundreds of large, specialty cezve pots for the military. The pots are made of copper and relatively indestructible, and soldiers use them to brew their coffee—Granovskiy provides locally roasted and ground Ethiopian beans, when he can—over portable stoves or coal. While espresso machines are naturally not widely available at front line positions, Granovskiy also sends a finely ground espresso mix that can be brewed with hot water and steeped for two to three minutes, which is then added to the cezve once it’s ready.

The drink, while serving a practical function, also represents Ukraine’s history as a crossroads of cultures and people. Espresso is a relatively modern creation from western Europe, and cezve is rooted in the Ottoman era. Combining the two, Granovskiy believes, could only happen in Ukraine. “I use coffee to talk to the world. Right now, this is the way for me to do it,” he says. “To get this coffee known, to explain why we do it, and to show what’s happening in Ukraine.” As the conflict continues to grind on, Granovskiy hopes that the Ukrainer can come to represent both the bitter challenges of war, and the lengths Ukranians will go to defend their country.

During a siege, desperation drove people to disinter skeletons from cemeteries.
art

A team of artists create horror out of fungi.
Video • Gastro Obscura

The Most Expensive Galician Restaurant

Get past the gatekeeper's apartment and enter an elaborate hoax of a restaurant with a Masonic feel.
Lviv, Ukraine

This cheeky restaurant has a serious devotion to lard sculptures.
Genoa, Nevada