Climbers in Utah Scaled a 400-Foot Rock to Measure How It Moves - Atlas Obscura
Want to see fewer ads? Become a Member. 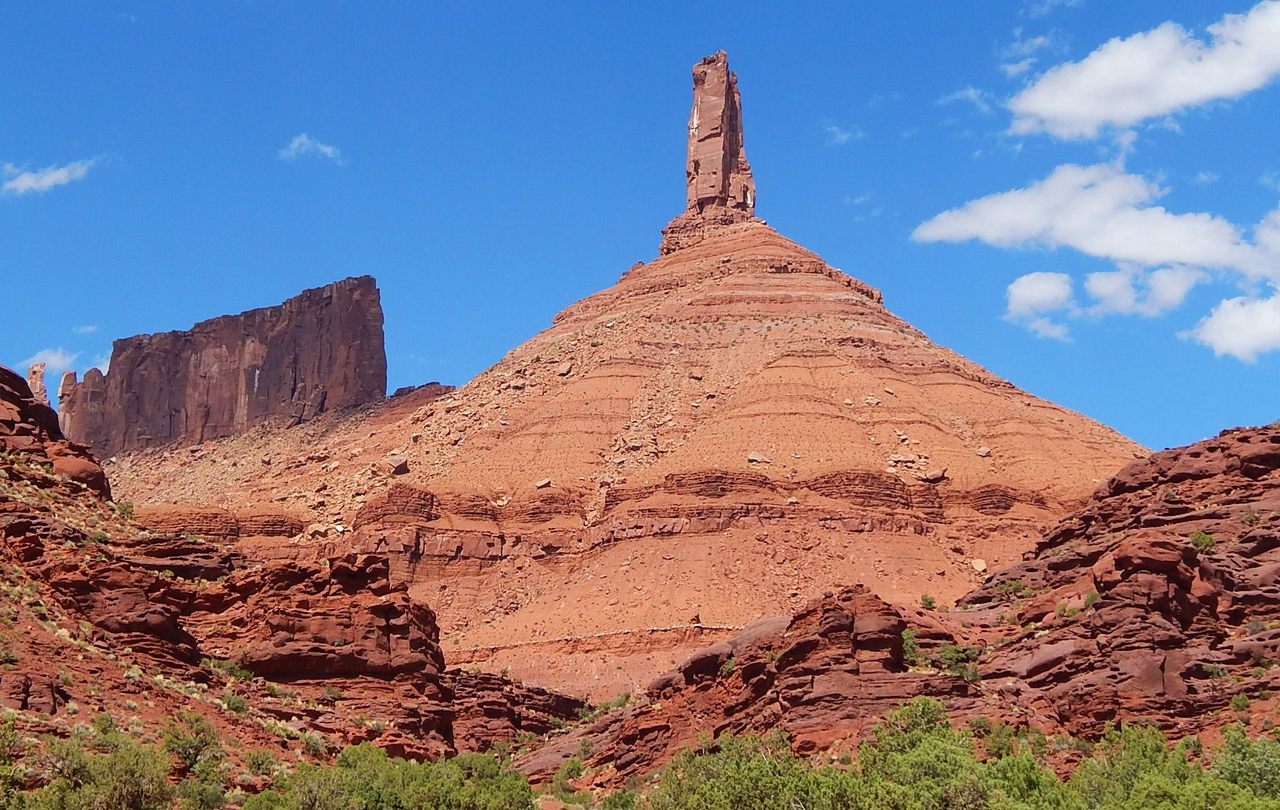 As you read this, a popular 400-foot-tall rock in Utah is wobbling ever so slightly. Castleton Tower, a red rock formation that rises from the desert like a turret, vibrates constantly but imperceptibly, swayed by wind and tiny earthquakes that rumble in the distance. Its vibrations are so slight that they cannot be seen by the human eye, or felt by the many climbers that scale its steep sides. Now, for the first time, scientists have measured Castleton’s beating pulse. Their research, led by geologist Jeff Moore, is published in the Bulletin of the Seismological Society of America.

Though it may seem dangerous for such a precipitous peak to be wiggling, even gently, this movement is perfectly natural and even expected, according to Riley Finnegan, a graduate student at the University of Utah and a co-author of the paper. “At any time throughout the year, at any hour, at any second, the tower is shaking back and forth,” she says. This is actually true for every structure and surface around us, she clarifies: the world is not static, and energy from various sources sends vibrations through everything. “Humans are unable to pick up on these vibrations because they’re so small.”

But these generally tiny vibrations are a big deal for large rock formations, because if they increase, the rocks could come crashing down. Researchers at the University of Utah have been studying vibrations of such formations ever since the high-profile Wall Arch—the 12th largest arch in Arches National Park—collapsed in 2008. “Not being a geologist, I can’t get very technical but it just went kaboom,” Chief Ranger Denny Ziemann told HuffPost after the fact.

On a geological time scale of millions of years, rock towers and arches are temporary structures that will eventually crumble from the twin forces of gravity and erosion. Castleton dates back to the late Triassic period, around 200 million years ago. But it’s unusual for humans to observe the death of large geological structures during our relatively short lives. “There were no obvious triggers for the rock fall. It was just a nice sunny day in the summer,” says Paul Geimer, a graduate student and co-author of the paper. Through their work, Geimer and Finnegan hope to better understand how rock formations such as arches, towers, bridges and hoodoos (small, spire-like formations) respond to vibration sources, in order to assess their long-term stability.

The researchers had always been curious about the vibrations of Castleton Tower, but the structure is only scalable by skilled climbers. So when two professional climbers, Kathryn Vollinger and Natan Richman, volunteered their time, Geimer and Finnegan were game. In December 2018, the researchers trained the climbers to unpack and use seismometers, instruments that can measure miniscule movements in three dimensions. “It’s a pretty straightforward instrument. You can set it directly on any part of the rock,” Geimer says. “But it’s delicate in a lot of ways.”

In March, the climbers set out, carrying the hefty seismometers in a protective box around the size of a suitcase. According to Geimer, it was a perfect spring day. “Great weather for climbing, and measuring,” he says. After placing a seismometer at the base of the tower to serve as a reference, the climbers summited easily and took measurements for three hours, while hanging out at the top with a handful of recreational climbers. Castleton Tower, also known as Castle Rock, was first ascended in 1961 and is enormously popular among climbers and nature photographers. The tower even starred in a car commercial, in which Chevrolet lifted the starlet Diedre Johnson and a 1964 Chevy Impala onto the tower via helicopter.

Large structures like Castleton vibrate at lower frequencies than smaller structures. The seismometers picked up two primary frequencies of 0.8 and 1.0 Hertz, which means the tower sways around once per second—roughly the same frequency as a heartbeat. “This tower is like a quiet sentinel,” Geimer says. “But every gust of wind will get this thing shaking.”

Luckily, Castleton Tower is relatively stable. It stands in a “range of sensitivity” that shields it from human-caused vibrations, such as traffic, as well as natural forces such as distant earthquakes. Around a month ago, an earthquake in California caused some smaller hoodoos to collapse. The researchers’ long-term goal is to be able to predict when these structures might fall down, but they’re not there yet. In the future, they hope to return to Castleton Tower to measure the formation’s vibrations over a longer period of time.

After measuring Castleton, Finnegan and Geimer went out and studied several other towers, choosing small enough formations that they could scramble to the top. They’re still on the hunt for more rocks to measure, and their process basically consists of Googling around for interesting structures. Sometimes they’ll just drive out by the desert and see what they can find. So if you know of any swaying arches or wobbling hoodoos, give them a ring.

When Ruggles Mine went up for auction, mineral collectors feared it would never reopen to the public. After a last-minute reprieve, its future is still uncertain.
geology