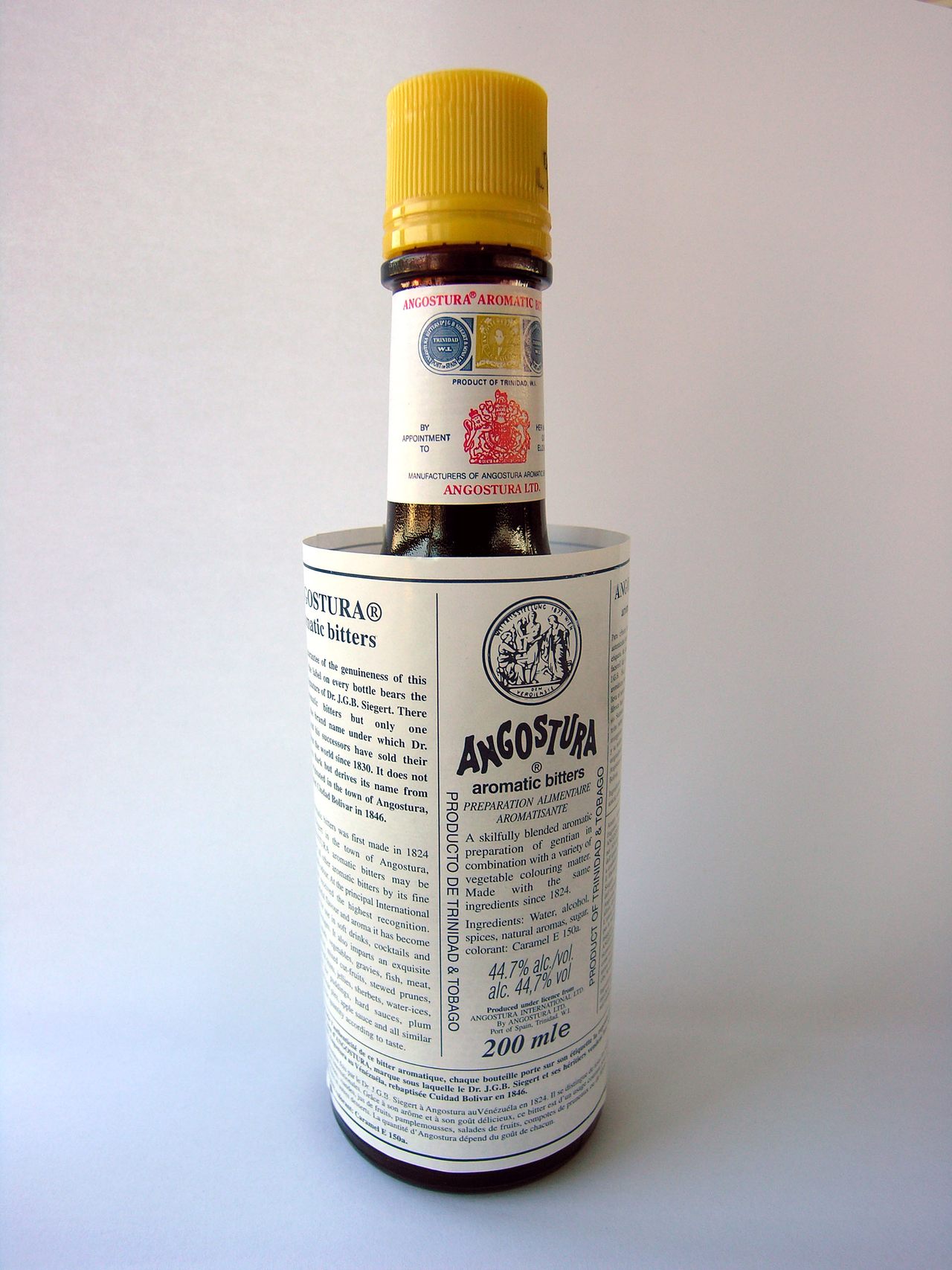 A bottle of Angostura bitters. Chriusha / CC BY-SA 3.0
In This Story
Place

The oldest continuously-operating tavern in Wisconsin used a clever loophole to serve alcohol during Prohibition.

Angostura, the bitters packaged in the ubiquitous, yellow-topped bottles, can be found on nearly every bar in the world. Typically, a dash or two of the potent liquid is enough to add an earthy, sharp tang to any drink.

But on Washington Island—a remote locale off the tip of a tiny peninsula, surrounded by Lake Michigan in the northernmost part of Wisconsin—people do things a bit differently. To truly drink like a local, you must take a full shot of Angostura at Nelsen’s Hall Bitters Pub (as one of only a handful of bars on the island, that means pretty much every resident is a regular). According to the card you receive as an initiated member of the “Bitters Club,” that shot means you are “now considered a full-fledged islander and are entitled to mingle, dance, etc. with all the other islanders.”

It’s curious why anyone would want to willingly do shots of Angostura in the first place. But somehow this minuscule island, with a population of around 718 people, not only instituted a strange tradition, but also became the world’s single-largest consumer of the bitters brand. Washington Island’s fascination with Angostura Bitters can be traced, like a handful of American drinking practices, back to Prohibition.

Tom Nelsen first arrived on Washington Island in the late 1800s as part of a wave of Danish immigration. He not only traversed the northernmost reaches of Wisconsin, but also then crossed the choppy, treacherous stretch of water known as the Death’s Door Strait, so named because of the many shipwrecks that occurred there. He survived the journey, and opened his dance hall on the island in 1899, adding a bar three years later.

At the time, it served up drinks just like anywhere else. But after the Eighteenth Amendment kicked off in 1920, effectively prohibiting the production and sale of alcohol, Tom was at a loss. Then, he found the perfect loophole that would allow him to keep doling out drinks. He would sell bitters, marketed as a “stomach tonic for medicinal purposes.”

“During Prohibition, Tom got a pharmaceutical license so he could legally sell bitters,” says Sarah Jaworski, whose parents have owned Nelsen’s since 1999. This loophole wasn’t quite the same as that used by doctors who prescribed alcohol during Prohibition. Rather, the bitters were classified as a “stomach tonic for medicinal purposes” instead of alcohol, meaning that a doctor’s prescription wasn’t required. “Medicinal tinctures are usually taken in smaller doses, but since Angostura bitters are 90 proof, he was able to legally sell it as a tincture,” she says. “He just sold it as shots.”

Tom’s tonic proved to be extremely popular among locals, many of whom apparently suffered from previously undiagnosed stomach ailments. In fact, customers who kept Nelsen’s open for the entirety of Prohibition are directly responsible for the pub being the oldest continuously-operating tavern in Wisconsin. That’s despite more than one visit from the feds, who harbored their doubts about the island’s sudden onset of tummy troubles, but were never able to shut down the pharmacy-cum-bar.

Prohibition was repealed in 1933, and the pub eventually resumed normal operations. But even after a full bar was reinstated, the bitter shots had embedded themselves in the island’s drinking traditions. Shots of Angostura continued to be one of the most popular items on the menu. Tom himself is said to have consumed up to a pint (about eleven shots!) of bitters every day. “The bitters were a huge part of his life,” Jaworski says. “He lived to the ripe old age of 90, and drank his bitters until the very end.”

In the mid-twentieth century, Tom’s nephew, Gunnar, and his wife, Bessie, took over the pub and carried on his legacy by founding the Bitters Club, which has continued under several different owners. The club has proved so popular that Nelsen’s is officially the largest purveyor of Angostura bitters in the world. According to a representative from Angostura, the bar singlehandedly sells upwards of 10,000 shots every year. Many members of the club have told Jaworski that the experience inspired them to buy bitters for their home bar, though more often to use in Old Fashioneds than as shots.

“We go through case after case,” says Jaworski. “Busy weekends we’ll go through three cases of bitters. When we get a first-timer who wants to join the club, we try to be encouraging. We tell them that it smells like clove, and that it’s not going to be as bad as they expect.”

Maryn McKenna was one of those first-timers when she arrived in Washington Island with a boyfriend in 1992. The two visited the island on a whim and wandered into Nelsen’s knowing nothing about its specialty.

“We stepped into this big white building where there seemed to be lots of people at the bar, and someone was slamming back a shot glass and gagging,” McKenna recalls. Naturally, she was intrigued. “I had never heard of the Bitters Club. I’d never even heard of Nelsen’s. Anyway, they poured the Angostura, I tossed it down, I didn’t choke, and the bartender stuck her thumb in the dregs. She stamped my card with a thumbprint and initialed it, gave me my card, and wrote my name in a ledger.”

Nelsen’s has evolved Tom’s tradition by integrating Angostura into some of its other offerings, such as the “Bitters Burger” special, where Angostura is used to season the burger patties before they’re cooked. And the several times a year the bar makes a ham, they use bitters instead of traditional spices, too. But Nelsen’s is cautious about over-using the potent flavor. “We don’t incorporate it in too many other places because it stands out and speaks for itself,” Jaworski says. “The island is a unique place, and our relationship with the bitters is part of what makes it that way.”

People say that when the feds brought Tom to court during the dry years to challenge his pharmacy’s legitimacy, he poured the judge a shot of bitters. The judge knocked it back, and then declared that anyone crazy enough to drink Angostura should be allowed to continue. Nelsen would probably be thrilled to know that they have.

Found: A 127-Million-Year-Old Fossil of a Fledgling