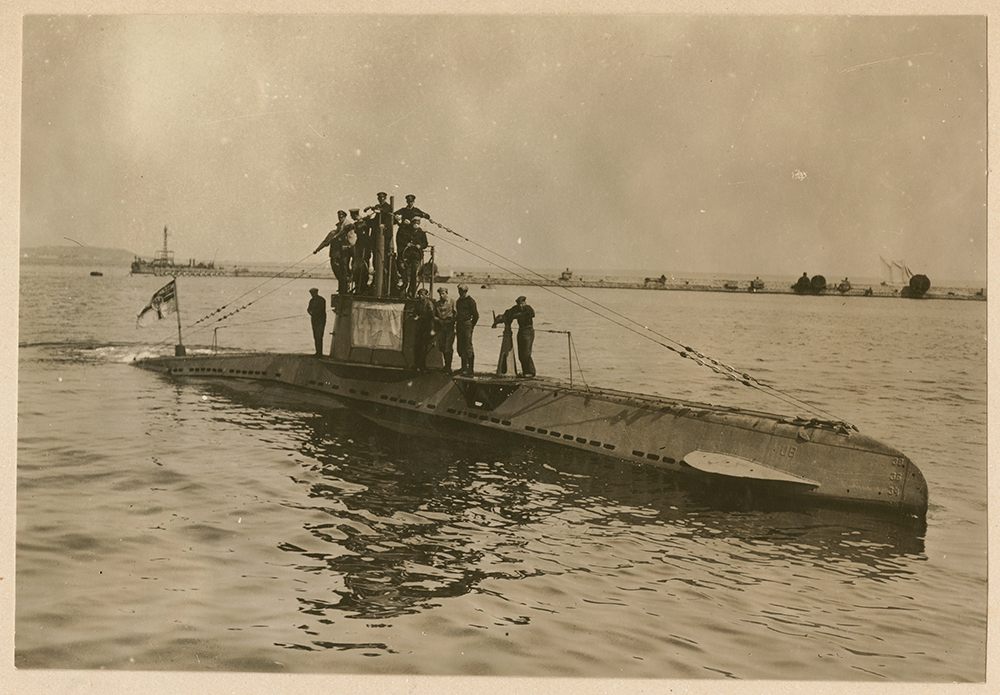 A German U-boat surfaces in the Black Sea. Today, only four of these menacing "iron coffins" from the world wars remain above the water. Many others rest in watery graves. SMU Central University / Wikimedia Commons (CC0)
In This Story
Place

The only remaining U-boat that is still floating never actually saw any action in World War II.
Place

This monument to those fallen in the World Wars is accompanied by a U-boat that Germany bought for a Deutsche Mark.
Place

After mysteriously refusing to surrender at the end of World War II this sunken submarine was only salvaged in a search for Nazi gold.

The German Unterseeboot, or U-boat, was a submarine that appeared seemingly out of nowhere to destroy both military and commercial ships. Despite their prevalence during World War I and World War II, only four U-boats remain intact today. (Others rest on the ocean floor.) Preserved as museum vessels, these U-boats are the reminders of the thousands of men who died in these “iron coffins.”

The USS Chatelain made sonar contact with the U-505 on June 4, 1944. Supported by two other destroyers, the Chatelain began firing Hedgehog anti-submarine weapons. Two F4F Wildcat airplanes launched off a nearby aircraft carrier spotted the U-boat and fired their guns into the water to mark its position. Additional depth charges forced the U-505 to surface.

The command was given to abandon ship, but the crew was unable to finish scuttling the U-505. A team of American sailors was able to board the U-505, and secure multiple charts and codebooks which proved useful in breaking the Nazi’s Enigma code. This made the U-boat the first warship captured on the high seas by United States forces since the war of 1812. The U-505 was then towed to Bermuda, where she was studied by U.S. Navy intelligence and engineering officers.

In 1954, with no further use for the U-505, the Navy donated her to Chicago’s Museum of Science and Industry. She was authentically restored and remains on display at MSI.

The U-995 was launched on July 22, 1943. Within days, she was severely damaged by an Allied bombing raid. Axis U-boat forces were stretched thin, though, and with great effort she was repaired and returned to service by September 16. Over the next two years, she completed nine patrols and sank four ships.

When Admiral Karl Donitz ordered the surrender of all ships in May 1945, the U-995 was moored at Trondheim, Norway. Rather than scuttle their boat, her crew surrendered to Allied forces. The Norwegian Navy took possession of U-995 and, in 1952, recommissioned her as the Kaura.

She served in the Norwegian Navy and was decommissioned in 1965. As a symbol of friendship, U-995/Kaura was sold back to Germany for the symbolic price of one deutsche mark. She was taken to Kiel and restored to her WWII appearance. In October 1971, she opened her doors as a museum ship and a memorial to the men who died during the war.

The U-534 served on weather reporting patrols from June 1943 to May 1945. She never served in combat, though she shot down two RAF bombers during skirmishes.

By May 5, 1945, all U-boats were ordered to surrender, but the commander of the U-534 refused to raise the black flag. She was intercepted by three RAF planes, who dropped depth charges and breached the hull. The commander ordered his crew to abandon ship.

U-534 sank and was forgotten until 1986, when a Danish diver discovered the wreck approximately halfway between Denmark and Sweden. In 1993, U-534 was raised from the seabed. Her 50-year-old ammunition was still live and had to be neutralized. By 1996, she was moved to Birkenhead, England, where she is now the centerpiece at Birkenhead’s Woodside Ferry Terminal. A massive restoration began in 2021.

It is still a mystery why U-534 ignored the surrender order. The most widely-accepted theory relates to three Zaukönig T11 torpedoes found in her aft section. Only 38 of these torpedoes, which included acoustic countermeasures to a British decoy system, were made. It is unknown why these torpedoes would be on a weather-reporting U-boat.

Launched on January 13, 1945, the U-2540 served as a training ship during the final months of the war. She was one of the most technologically advanced U-boats built by the Nazis, and one of the first submarines designed to operate primarily while submerged, rather than on the surface and only diving for a short time.

On May 4, 1945, the U-2540 was scuttled in an inlet between Denmark and Germany. A decade later, the newly-formed German Federal Navy needed submarines to patrol their coast. Rather than build new ships, they located and salvaged the U-2540 and other U-boats. She was retrofitted and rechristened the Wilhelm Bauer. She was decommissioned in 1982.

A non-profit group of U-boat enthusiasts later purchased the Wilhelm Bauer. Restored to her wartime condition, she was permanently moored next to the German Maritime Museum in Bremerhaven in 1984. Today, the U-2540 is the only U-boat still floating in the sea. The U-2540 is open to visitors and dedicated to the preservation of peace.

The Oracles of Rome: Two Architectural Oddities Predict the Apocalypse